The Clue of the Ambergris: Octagon House (1937), Phoebe Atwood Taylor

If one judges the appeal of Phoebe Atwood Taylor's Cape Cod mysteries from the Thirties and Forties, when all but one of them were published, by their local color and general air of folksy Americana, Octagon House must surely be deemed one of the author's most successful books.  The novel is chock-a-block with the stuff.

First, we have the titular octagon house itself, part of the octagon building craze in the late antebellum era inspired by American reformer Orson Squire Fowler's 1848 book, A Home for All; or, The Gravel Wall and Octagon Mode of Building.  The largest number of the octagon houses listed in the National Register are located in New York and New England, including one in the Cape Cod town of Barnstable, which in 1940 had a population of a little over 8000 people.  This domicile, the Captain Rodney J. Baxter home, which comes complete with an octagonal "carriage barn" on the grounds, might very well have served as the inspiration for the fictional octagon house in Taylor's novel.

Then there is the newly unveiled post office mural, which inflames the citizens of the fictional town of Quanomet, where the novel is set, with its myriad insulting caricatures of actual citizens.  This reflects real life art created in the era of the New Deal, when the U. S. Department of the Treasury commissioned thousands of such pieces throughout the United States.  Most of the art I have seen from them is strikingly beautiful and surely noncontroversial, but what good would that be to Phoebe Atwood Taylor's [henceforth PAT] impish criminal imagination?  (To be sure, a lot of federally funded art projects in those days, as in these, got condemned as leftist propaganda.)

Below are post office murals in from East Wareham, Massachusetts and Southington, Connecticut.  The second one looks pretty anodyne, with its Norman Rockwell-ish portrayal of a farm, a mill and a church, but maybe the portrayal of freedom of the press--I assume that's what it is--in the first one bothered some people.  It probably would today!  (Note also the gratuitously shirtless male hunk.) 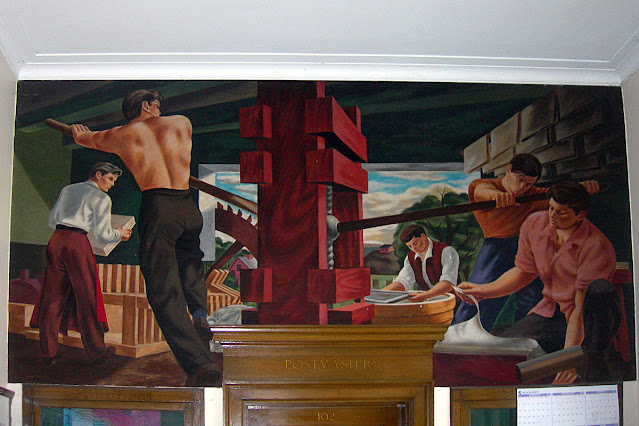 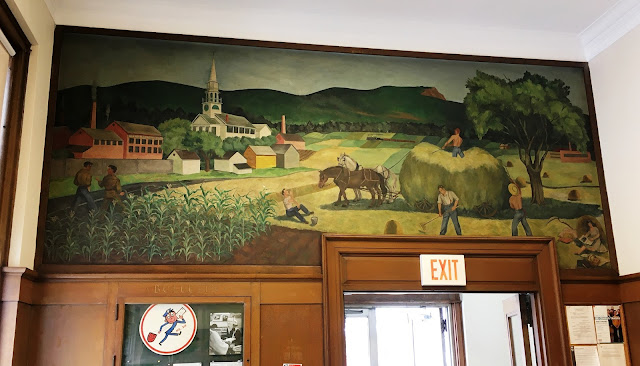 Finally, we have the one hundred pound lump of ambergris which washed up on shore and is estimated to be worth about $50,000--or, in modern value, close to a million dollars.  As someone wrote in the front endpapers of my copy of Octagon House, ambergris is a gray fragrant substance, found on the seashore, from a spermacete [sic] whale, used as a perfume base, very rare and valuable, worth $35 an ounce.

This would be about $450 a pound, so you can tell this was a long time ago as the stuff is worth even more today!  Today news stories occasionally pop up about about million dollar finds of ambergris--waste byproduct from the sperm whale's intestinal tract--made by lucky people at seaside locales around the world.

What a trove of colorful circumstance there is, then, in this novel.  Let's dig into the characters.  First, there's Pam Frye, pretty, twenty-three-year-old chatelaine of the "old eight-sided Sparrow place," aka the much decayed Octagon House.  She and  her father, Aaron Frye, have to take in paying guests, the most recent of whom are Timothy Carr, a prep school teacher from Boston, and his grandmother, owner of a cat named after anarchist political activist Emma Goldman.  (The cat is a "red Persian" that hates cops, you see.)

Speaking of which, I note this comment from Tim Carr, as an indicator of social views of the police in those days: "This is my first actual contact with the police, you know, and it amazes me to find that they think the way they do in movies and books.  I suppose it's like stupidity in housemaids.  If they had brains they wouldn't be housemaids.  Or police."

You often find, in Golden Age mysteries, people of "good" social standing taking a rather condescending, even contemptuous, attitude to the police, and this would certainly be an example of it!  (And poor housemaids never catch a break, do they?)  To be fair, cops in Taylor's books often remind me of the Keystone variety, so Tim Carr may not be too off here, in his own fictive world. 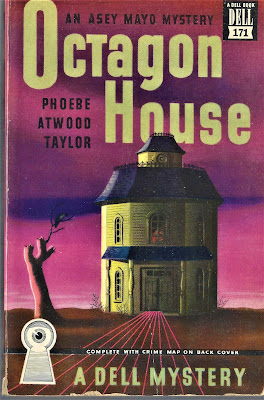 Moving on, we also have Pam's wicked sister, the glamorous model known as Marina Lorne (formerly Mary Hosannah Frye).  She's married to Jack Lorne, the painter of the infamous Quanomet mural, and they live near Octagon House.  Marina also pals around with local playboy and all round bad egg (like Marina herself) Roddy Strutt.

Then there's nosy village gossip Nettie Hobbs, the "pickle lime lady," who runs the Women's Exchange and has set her cap at widower Aaron Frye.  Oh that's right, pickled limes, that was another New England thing (they are mentioned in Little Women), although I think by 1937 they were not the rage they once had been.

We also have Pam's friend Peggy Boone, a commercial artist, and then there's volatile selectman and plumber Earl Jennings, who keeps popping up in conversations.  Oh, and the local Republican congressman, a slick pol by the name of Elliott, who was responsible for getting that post office mural the town despises and is now trying to figure out how to get rid of it.

It's wicked Marina who gets murdered, with Pam's own knife, after she and Pam carry that aforementioned one hundred pound lump of ambergris from the beach back to the garage at Octagon House, bickering all the way over the matter of its ownership.  Pam is the number one suspect of the police, so she takes flight; and then it's up to folksy series detective Asey Mayo to save the day.  Which he does, of course.

Octagon House was actually the first PAT novel I ever read and I have to admit I got exasperated with it after an unknown dubbed by everyone, fairly enough I suppose, the Biffer, successively bashes on the head Asey, Tim Carr, two cops and Aaron Frye, and not one person among them has even a mild concussion afterward.  This beats hard-boiled mysteries!  That same year, 1937, PAT would debut her blatantly slapstick Alice Tilton series, where these "biffings" are routine. It starts to feel like a Punch and Judy show.

Yet while all the biffings and bashings in these books get a little old for me, I find on rereading the book, now that I have become more acclimated to PAT's oddball mysteries, that there was a lot I liked in Octagon House.  For PAT the mystery is pretty straightforward.  I mean, there's complication of incident, but overall the plot isn't too convoluted.

Further, there are one or two quite good clues and overall I would say this is probably the best of PAT's Asey Mayos which I have read so far.

Of course it doesn't hurt that I love octagon houses and can well recall touring Alabama's lone surviving contribution to the craze three decades ago, in the small "wiregrass" town of Clayton.  It inspired a mystery too!  But that's another story, I reckon.

Humorous Bit: After Congressman Elliott and Asey call on local millionaire Carveth Strutt, Rodney's craven uncle, they are left cooling their heels at the mansion, surrounded by plates of hors-d'oeuvres.  Asey sardonically observes:

I never see 'em...that I don't think of the time that I took Jennie an' Syl [his cousin and his cousin's wife] to a birthday party of Bill Porter's.  Jennie, she had a fine time, but I knew somethin' was worryin' her, an' when she got home, I asked her what it was.  'Twas about the hors d-oeuvres.  She kept worryin' if the hired help had to make those things every day, just on the chance of comp'ny droppin' in, or if they was somethin' special. She knocked the Ladies' Aid cold, at the next meetin', with her versions."

Racist Bit: At the Strutt mansion there are two "slightly repulsive" native Filipino servants, one with a squint and the other with a cauliflower ear, who patrol the grounds and warn off Asey, who responds by humming the "old Filipino song of insurrection days," written after President William H. Taft referred to to Filipinos as our "brothers": "Oh, he may be a brother of William H. Taft, but he ain't no brother of mine."

Later we learn that Asey was a veteran of the bloody Philippine-American War and the Moro Rebellion, which successively lasted from 1899 to 1913, not to mention the Boxer Rebellion in China.  So I suppose we shouldn't be surprised at his chauvinistic views.