For many years paperback publisher Pan--known for their series of Books of Horror Stories, edited by Herbert Von Thal--also published a series of Ghost Books, the first three of which had been edited, on their original hardcover publications, by Lady Cynthia Asquith.  Like the early Horror Books, the first three Ghost Books appeared in memorable Pan editions--certainly much more memorable than the boring photographed ones from Beagle which followed in the seventies.

The first of Lady Cynthia's celebrated Ghost Books appeared in hardcover way back in 1927, but the other two belatedly appeared in the Fifties, in 1952 and 1955 respectively, not too long before the editor's death in 1960.  There were also four additional supernatural anthologies that Lady Cynthia edited between the First and Second World Wars which are, like the original Ghost Book, rather rare now.

The Third Ghost Book collects 27 stories (!) and sports in the original Pan edition a great creepy cover.  However, though there are some good, even great stories, between its covers, I found it a disappointment overall.  For me the standouts--the Snickers bars in the treats bag--were: 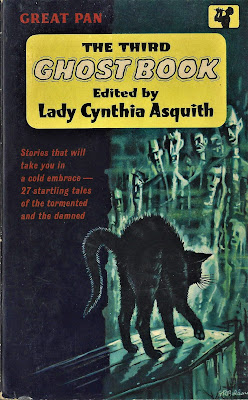 The King of Spades, Nancy Spain

Two of them, Ringing the Changes and The Tower, I had read before, but it was pleasant--if that's the right word--to come back to them.  Both the Elizabeths--Bowen (1899-1973) and Taylor (1912-75)--were highly successful mainstream writers, while Robert Aickman (1914-81) was one of the most "literary" of horror writers.

Rosemary Timperley (1912-88) wrote a number of well-regarded ghost stories and after Asquith's demise she edited Ghost Books 5-9.  Marghanita Laski (1915-1988) was a novelist, one of her books being The Victorian Chaise-Lounge.

Mary Fitt and (1897-1959) Nancy Spain (1917-1964) we here will know from their crime fiction surely.  Apparently Jonathan Curling published a couple of biographies and he also contributed to The Second Ghost Book, but I know nothing else about him. 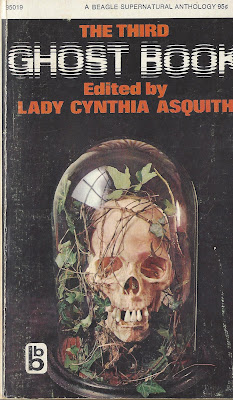 The Claimant offers a cliched situation--the couple who buy a dream home in the country and then live (or don't live) to regret it--but Bowen makes you really feel for the nice retired couple.  When you care for the characters in a horror story that makes the horror in what happens more potent.

The Doctor tells of a the queer experience of a woman, lost in the country, at a mansion she finds providentially (or not).  It's the last line that makes this one--it definitely made me sit up.  The story has the flavor of a classic campfire tale.  And Mary Fitt's murder fiction fanciers won't be disappointed!  The basic situation could have been expanded into a Victorian murder story.

Ringing the Changes is an early story by Aickman, and one of his best.  Set in a town that resembles the famous Suffolk "drowned town" of Dunwich, which for centuries has been crumbling away into the sea, the story draws on the legend that at certain tides one can hear the bells from the towers of ancient churches submerged in the water.  It's a fantastically evocative story with its trappings of menace and terror, but there's also a very interesting sexual subtext among the well-realized characters at the local inn (like in a lot of Aickman, I think.)  Aickman is regarded as one of the greatest horror writers from the second half of the twentieth century, and rightly so.

Yielding no place to Aickman's story is Marghanita Laski's The Tower, a brilliant and terrifying short tale loaded in its short space with commentary on male-female relationships (liker Laski's novel The Victorian Chaise-Lounge). It's about a woman, the wife of a British cultural official in Italy, who while on a solo touring excursion outside Florence, stops, as the day dies, to pop in (just for a moment) an ancient tower....This model short story has developed a sort of life of its own for students of the short story, and I can see why.  It's beautifully constructed.

Jonathan Curling's tale, I Became Bulwinkle, is really more a soul transference story rather than a ghost story proper, and it's peopled with a Wodehouse-style characters, but I thought it was really quite  effectively horrid. I'd like to know what other fiction curling wrote. 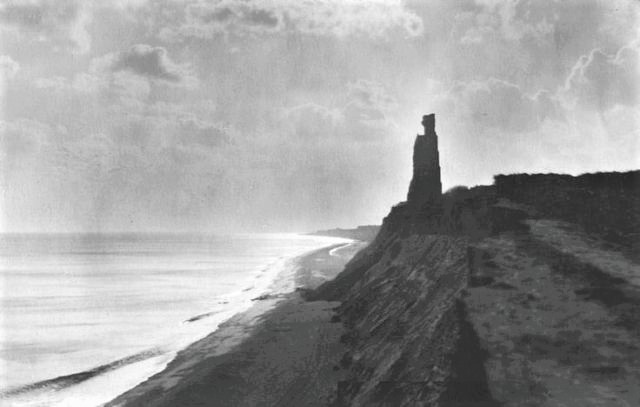 Harry is another tale that succeeds on the strength of its characterization and is quite poignant on that account.  In it Timperley taps into adoptive parents' fears that the child they adopted isn't really "theirs'" in some sense.  I notice throughout the affectionate and caring adoptive mother still refers to her little girl's dead parents as her "real" parents.  How fortunate that we have changed that language today!

In Poor Girl, Elizabeth Taylor taps into the classic Turn of the Screw timid governess at a country house situation as the "poor girl" of the title tries to cope with her precocious young male charge.  Taylor packs quite a bit in here about relations between the sexes and classes in the late Victorian era (around 1900)--and the roaring Twenties too!  What would Queen Victoria have made of it all?

Given the quirkiness of most of her crime fiction, I was surprised how "normal" was the Nancy Spain story, The King of Spades, about young Ronald, his mixed doubles tennis partner Janice and his his co-worker at the bank, Doreen.  It has something of the sardonic dark quality of a Francis Iles--and that is no bad thing in a murder story.  Is it a ghost story?  You decide.

I didn't particularly like L. P. Hartley's story in the collection, but his introduction to the volume is very interesting indeed and I think I will do a separate post on it.  In the meantime, Happy Halloween!

Posted by The Passing Tramp at 2:09 PM