The Day of the Conflagration: No Next of Kin (1959), by Doris Miles Disney

The Ringling Brothers and Barnum & Bailey Circus arrived late at Hartford, Connecticut on July 5, 1944--a portent of ill luck to the performers, like uttering the name of The Scottish Play during a theatrical performance.  As a result the early show for the day was canceled, but the evening gala went on, without mishap; and the next afternoon perhaps seven thousand people, by far the largest portion of which were women and children (one of whom was perennial Seventies game show panelist Charles Nelson Reilly), gaily trooped into the Big Top to see, among other delights, exotic animals, cavorting clowns and the dazzling leaps and dives of the Flying Wallendas.  It was a sweltering hot day with not a hope of rain, though had there been rain the great tent had been waterproofed with a coating of paraffin wax dissolved in gasoline--customary practice at the time time.

Shortly after the lions did their tricks and the Wallendas took the stage, a fire broke out, possibly as a result of a spent cigarette carelessly thrown outside the tent by the men's toilets.  Coated with paraffin, the Big Top was a pyromaniac's dream.  It quickly went up into flames, as the crowd seated on the bleachers inside was overtaken by rising panic.  Some of the exits were blocked by animal cages and the chutes through which the big cats had exited to safety.

With scorching flames reaching one hundred feet into the air, the Big Top collapsed within ten minutes on the people still trapped below.  Nearly 170 men, women and children (possibly more) were killed variously by flames, smoke, desperate leaps from the stands and the trampling bodies of other panicked, fleeing people.

One body that was never identified, that of well-preserved little white blonde girl, caught the public imagination.  She became known as "Little Miss 1565," after her identification number at the morgue.  To this day this child has never been conclusively identified. 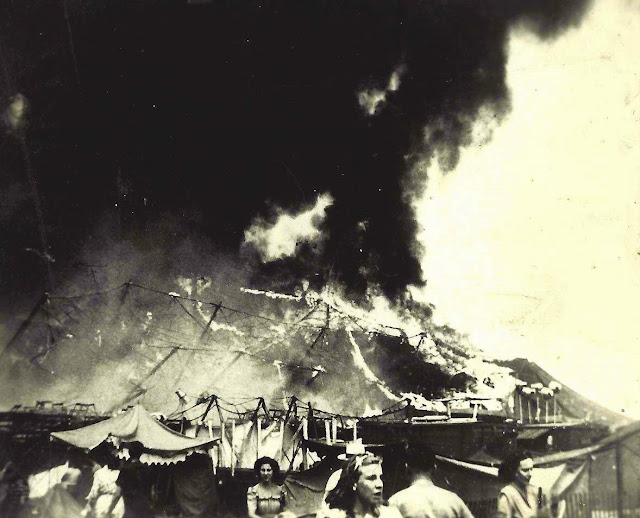 Crime writer Doris Miles Disney (1907-1976) was a native of Connecticut and lived there the majority of her life, only departing permanently from the state in the last decade of her life.  In 1958, when she looking for an idea for the twenty-fifth of her nearly fifty crime novels, she "lit" upon the Hartford Circus Fire.  This novel she titled No Next of Kin. 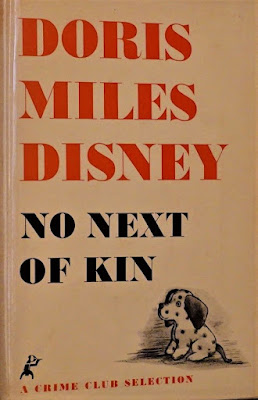 The prologue of the novel, titled September 1954, is gripping.  We learn that a twenty-three-year-old woman named Andrea Langdon has just collected her five-year-old illegitimate son, Greg, from his carers since his birth, a couple named Effie and Walt Horbal, who live on an isolated farm in rural Connecticut.  To her wealthy widowed businessman father she plans to introduce Greg as a boy she has decided to adopt as a result of her orphanage charity work.

At a town which the mother and son pass through on their drive, they come upon the Annual Fair and they decide to see the sights there for a short while.  A fire breaks out while they are there and tragically Greg is among the casualties.

This is an effective vignette, to a great extent because the author doesn't blanch at killing off a sweet-natured little boy, who clings the whole duration of the last minutes of his life to the spotted toy dog his mother gave him.  A likeness of the dog graces the front of the hardcover edition (see above right).  Greg becomes known in the press as "Little Sir 915," since Andrea in self-preservation does not identify the dead boy as her son.

Chapter One takes place four years later when Andrea, now twenty-seven, is living at her wealthy father's country home, helping to manage his political campaign for Congress.  When she appears on television with her father, she becomes the subject of a blackmail plot by the scoundrel father of her child, who is working in collusion with Walt Horbal.  She'd better pay up, see, or they will reveal she had an out-of-wedlock child!

Andrea had thought the Horbals had moved out to Nevada and apparently she didn't think at all of the father of her child, Seymour Boyd, a rotter from a good (i.e., wealthy) family who impregnated her when she was an impressionable eighteen year old schoolgirl and then walked out on her, not realizing her dear pa was so loaded with dough.

What does Andrea do now?  Will she try to pay them off?  Will the rogues fall out?  Will that charming reporter, Fergus MacDonald, whom Andrea recently met at a political do, come to her rescue?  The answer to these and other questions you probably know already.

No Next of Kin is a short book of about sixty thousand words, but I increasingly lost interest in it as I went along.  I wouldn't say a single thing that happened between its covers surprised me, aside from what a dreadful wet noodle Andrea turns out to be--and maybe this shouldn't have surprised me.

After all, look at what a collection of limp dishrags Mignon Eberhart heroines usually turn out to be! But the prologue raised my expectations that Andrea might turn out differently from what you get in Eberland.  Alas, no: Andrea evidently would have gone on paying blackmail forever had her problem not taken care of itself and Fergus stepped in for good measure.

Andrea actually pliantly turns over $50,000 to the shit Seymour Boyd--about $468,000 in modern worth.  That's how much money Andrea has to play around with.  I really found myself not caring at all about the fate of this privileged and self-centered person.

I've seen this one referred to as DMD's best book and it was her only selection, I believe, in the Dell Great Mystery Library, but I have read better by her.  It may be the historical connection to the Hartford Circus Fire that it intrigued people (this book was mentioned in DMD's obituaries), but the real life fire was vastly more interesting and tragic.