An interesting ad is found on the back of the dust jacket of the 1930s Sun Dial reprint of Todd Downing's 1936 mystery, The Case of the Unconquered Sisters.

Successful Men Read, the headline of the ad declares.  This text follows: 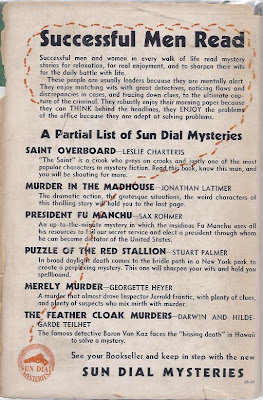 Successful men and women in every walk of life read mystery stories for relaxation, for real enjoyment, and to sharpen their wits for the daily battle with life.

These people are usually leaders because they are mentally alert.  They enjoy matching wits with great detectives, noticing flaws and discrepancies in cases, and tracing down clues, to the ultimate capture of the criminal.  They robustly enjoy their morning paper because they can THINK behind the headlines, they ENJOY the problems of the office because they are adept at solving problems.

Listed below this are the following mystery novel titles:


Saint Overboard, by Leslie Charteris
Murder in the Madhouse, by Jonathan Latimer
President Fu Manchu, by Sax Rohmer
The Puzzle of the Red Stallion, by Stuart Palmer
Merely Murder (aka Death in the Stocks), by Georgette Heyer
The Feather Cloak Murders, by Darwin and Hildegarde Teilhet

How many of these novels have you read?  Did reading them sharpen your wits for your daily battle with life?  Though you may not read a morning paper anymore, does mystery reading help you think behind the headlines of the internet articles you read?

What's always striking to me about pieces like this is their somewhat defensive tone.  Even today, people often still feel like they have to justify time spent reading, say, Jo Nesbo's The Leopard or Ian Rankin's The Impossible Dead.  They're not mere thrillers or detective stories, darn it all: they're crime novels (or, better yet, noir)!

In the Sun Dial ad, mystery fanciers are assured that reading mysteries is an intellectually respectable, indeed laudable, activity--not some guilty addictive pleasure to be ashamed of, as Edmund Wilsonwould cantankerously assert in the 1940s.

Interestingly, mysteries are defended as puzzles, not as crime novels, which likely would not be done today, when "mere puzzles" are viewed with disdain by so many critics (indeed, even, evidently, by some mystery writers themselves).

P. D. James writes in her Talking about Detective Fiction that the puzzle-oriented detective tales of the Golden Age of detective fiction were only quasi-intellectual--in contrast, in her view, with "serious" modern crime novels, like, just possibly, her own!

Yet intellectuals were some of the most devout readers of detective fiction in the Golden Age.  To be sure, Edmund Wilson loathed the stuff, but T. S. Eliot, for example, couldn't get enough, seemingly.  Certainly T. S. Eliot must have been as mentally alert as Edmund Wilson!  The 104-year-old Jacques Barzun, a man who as a teenager read Arthur Conan Doyle's later Sherlock Holmes tales when they first were published, is perhaps the last such super-intellectual link to this entire Golden era still with us (though I suspect Barzun probably never deigned to read President Fu Manchu).

And there's no doubt that that plenty of businesspeople--the demographic at which the ad seems most squarely aimed--read detective novels, not to mention politicians, judges, lawyers, physicians and clergy, some other notably favored groups in mystery genre promotional efforts.

For that matter, in 1936 P. D. James herself, a sixteen-year-old schoolgirl, was reading Dorothy L. Sayers' Gaudy Night.  And 74 years later, at the age of 89, Baroness James bested the BBC director general in a battle of wits.  Of course Gaudy Night, James no doubt would tell us, is no "mere puzzle" but a serious novel!  Still, just maybe even we Agatha Christie fans have learned a thing or two also.

This brings me to a final point.  Note how in the Sun Dial ad mention of women is made only below the big, bold headline, in the body of the text.  Yet increasingly book publishers became aware that sharp wits for the battle with life were desired by women (like P. D. James) as well as by men, and that many women were reading detective novels.  Today, I suspect, more women than men read genuinely ratiocinative mysteries.  Certainly this seems to be the perception.  What do you think?

Posted by The Passing Tramp at 5:48 PM