Despite being one of the most highly-acclaimed American novelists, William Faulkner generally never saw his films translated to film with much success.  The Long Hot Summer (1958) , The Sound and the Fury (1959) and Sanctuary (1961) seem like rather standard southern soapers, failing to capture to singular intensity and brilliance of their source material  I understand The Tarnished Angels, the 1957 film version of Faulkner's mediocre novel Pylon, is supposed to be rather good; and The Story of Temple Drake, the original film version of Faulkner's crime novel Sanctuary, sounds interesting (it was pre-code and considered quite scandalous at the time, like the book). 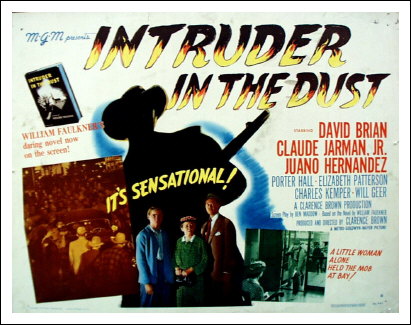 However the best film made from a Faulkner novel generally is considered to be the 1949 mystery Intruder in the Dust, directed by Clarence Brown.  Chances are viewers won't find Dust as memorable as the beloved To Kill a Mockingbird (based on the Harper Lee novel), with which which Dust has more than a few points in common.  But it is well worth watching in its own right.

Intruder in the Dust was published by Faulkner after a six year drought during which he worked in Hollywood on scriptwriting.  For central characters he turned to lawyer Gavin Stevens and his young nephew "Chick" Mallison, character who appeared in a series of short mystery stories and a novella he wrote in the 1930s and 1940s (these would appear in in 1949 in Knight's Gambit, already reviewed here).  Like these works, Intruder in the Dust is a mystery tale, though Faulkner has much more in mind than "mere" mystery-mongering. In Dust Faulkner grapples with the racial problems then coming to a head in the United States by making the person arrested for the novel's murder an innocent black man threatened with lynching at the hands of a white mob.

By 1949, Hollywood was willing to explore issues like racism and anti-Semitism, though often in ways that seems timid and tepid today.  Intruder in the Dust holds up well today, however.  It's shot in the stark, realistic, quasi-documentary style popular in the late 40s and early 1950s, on location in Oxford, Mississippi itself, Faulkner's own stamping ground. Brown got Oxford locals for the extras in the film's amazing crowd scenes, lending  a lot of authenticity to the film (I had to wonder whether these people were aware they were playing a bunch of horrid yokels, basically, come to watch a lynching).


The black man arrested for the murder of a white man (shot in the back) is Lucas Beauchamp (Juano Hernandez), a local landowner resented by many whites for his independent ways (he himself is an offspring of a local planter and a black woman).  Through a quirk of fate he has a friendship of sorts with young Chick Mallison (Claude Jarman), who gets his uncle, lawyer Gavin Stevens (David Brian), involved in defending him, though Stevens himself believes Beauchamp is guilty of the foul deed.  It falls to Chick, along with an eccentric old southern lady, Miss Eunice Habersham (Elizabeth Patterson) (surely Faulkner's nod of sorts to Miss Havisham of Great Expectations?) and Aleck (Elzie Emanuel), the son of the Mallison family's cook, to make something happen--which they do by, following a hint from Beauchamp, digging up the grave of the murder victim. They find it empty!

This discovery gives the wily but not essentially mean-hearted sheriff (Will Geer) a chance to investigate the crime to find the true culprit, but in the meantime a lynch mob being formed by the victim's brother  has to be stymied.... 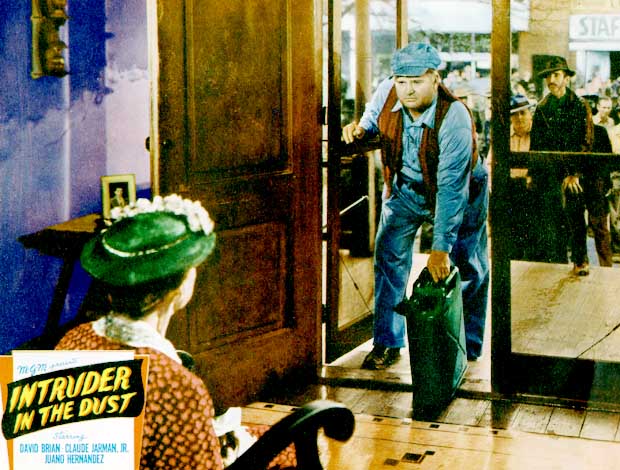 Director Clarence Brown, a six-time Oscar nominee, apparently brought a lot of passion to this film (the son of a Massachusetts cotton mill operator who moved to Atlanta with his family at the turn of the century, Brown as a teenager witnessed the horrific Atlanta Race Riot of 1906) and it shows.  There are some memorable images: the line of men staring at Beauchamp as he's taken from the police car to the prison; Beauchamp's eye looking out of the prison door; the carnival-like atmosphere as spectators gather to watch the expected lynch mob descend.

This latter scene in particular reminded me a great deal of Billy Wilder's film Ace in the Hole, which would follow Dust a couple years later.  It is quite striking in its own right.  You won't forget the woman with the baby marching up to the lynch mob ringleader and impatiently asking when's it all going to start, or the man literally drooling in anticipation of the event, or the ringleader filling his tank of gas at the station and marching with it across the courthouse square to the jail.  The grave-digging scene also is well-filmed and suspenseful.

I think To Kill a Mockingbird is so much better-remembered than Dust today is in part due to the characters.  People are rightly drawn to the characters in Mockingbird, particularly Gregory Peck's Atticus Finch (another country lawyer) and his two young children.  In Dust Brian's Gavin Stevens and Jarman's Chick don't have the same charm.  Brian in particular seems miscast, rather cold and hectoring (he seems like he has stepped out of an urban film noir).

The characters that really stood out for me are Juano Hernandez's Lucas Beauchamp (Hernandez totally nails this essential role) and Elizabeth Patterson's Miss Habersham (Will Geer's sherriff also has great authenticity, as does Nub Gowrie, the one-armed father of the murder victim, played by Porter Hall, in quite a different turn for him).  Elizabeth Patterson, who played Miss Habersham, is best known today as I Love Lucy's spinster Miss Trumble, but she's really good here (no wonder she's authentic too: she was born in 1874 in Savannah, Tennessee, the daughter of a Civil War veteran and judge).

Though the novel Intruder in the Dust is controversial today because in it Faulkner through his mouthpiece Gavin Stevens insists that the South must be left alone to solve its race problem itself (these sentiments are not to be found in the film), it should be remembered that Faulkner himself in his own community was considered by many to be objectionably liberal (a "n-word lover" was the term some used to describe him).  Both as a novel and a film Intruder in the Dust is an historically important example of social consciousnesses art.

But how Dust, you may ask, as a mystery film?  Well, it's certainly not Agatha Christie.  There is a bit of genuine ratiocination concerning the missing corpse, but that's about it.
There's pretty much only one other plausible suspect in the crime (the identity of this person is kept secret in classic fashion until dramatically revealed near the end of the film).  Christie would have thrown in about six other suspects for good measure!  Still, I think mystery readers--as well as those benighted souls who don't read them--should enjoy this well-made film, which hasn't gathered dust much at all in the last sixty-three years.
Posted by The Passing Tramp at 2:49 PM