The general view of the Miss Silver mysteries of Patricia Wentworth (1878-1961) is that they have a similar ambiance to those by Agatha Christie, with, however, more love and less mystery. This is certainly true in the case of Eternity Ring (1948), the fourth Patricia Wentworth detective novel I have read, and the poorest as a mystery (the others are The Chinese Shawl, Miss Silver Intervenes and Latter End).

Although Patricia Wentworth's memorably Miss Marple-like detective, Miss Maud Silver, first appeared in a Wentworth novel in 1928, most of the books in the Miss Silver series date from the 1940s and 1950s (before 1943, only four Miss Silver mysteries had been published; most of Wentworth's genre output up to that time is to be found in her over thirty Silver-free thrillers) .

This being the same time that Agatha Christie's Miss Marple began appearing much more frequently in novels (Miss Marple only actually appeared in one Christie novel and a short story collection before World War Two), it would seem to me that the 1940s and 1950s are the decades when the idea of the British village "cozy" really began gelling in the minds of readers. 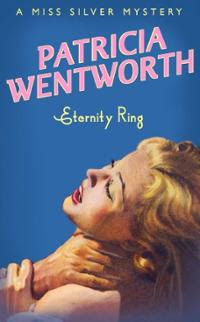 It is this cozy atmosphere that I found most interesting about Eternity Ring.  The first three chapters, which deal with life in the village of Deeping, were really rather charming.

Chapter Three, which details a small tea party at the cottage of Alvina Grey, the spinster daughter of the former Rector, I found the best part of the book.  I would have loved for Miss Vinny to have played a bigger part in the tale (there's another great chapter with her later).

Although the story in Eternity Ring takes place after World War Two (events in the late war play a major role in the book), one might well be excused for thinking it occurs twenty years earlier.  I not infrequently found myself thinking of Downton Abbey!

Deeping is a village dominated by a few old landed families, and most servants know their place and like it (housekeeper Mrs. Barton still thinks darkly of the French and their "nasty revolutions").  The two commoners who get above themselves, farmer's niece Mary Stokes and chauffeur Albert Caddle, are heartily disapproved of by Miss Silver and the author.

Mary Stokes served with the ATS (Auxiliary Territorial Service) and came back discontented with life on the farm.  A local lady of the gentry complains of Stokes:

"She isn't a village girl at all--she's something much smarter and more sophisticated.  She comes down to the farm once in a way when she's out of a job or wants a change....I think it's a relief when she goes off again."

Stokes, we learn, is a fast type who enjoys leading men on and laughing at them. Not altogether surprisingly, she comes to a very bad end indeed when her neck is broken by an unknown assailant.

Albert Caddle, who married a much older retired housemaid for her money and plays around with other women, is described by the author as "very well built and beyond all question a handsome young man."  However, when he is "bold" and "defiant" when being questioned by Inspector Lamb, the policeman, knowing he "has a thousand years of solid English law behind him," squelches the chauffeur fast, much to the approval of the author (Lamb, I noted, declined to address Caddle as "Mister").

Caddle's current girlfriend, shop girl Maisie Traill, doesn't come off very well either.  When she expresses indifference to the fact that she is going about with a married man, Inspector Lamb reflects: "Real bad upbringing she must have had.  Wanted smacking."

When Mary Stokes is found murdered, people reflect that it was probably a local male whom Stokes got "all worked up."  "A young man'll stand just so much and no more," pronounces the cook at the great house Abbottsleigh.  Or as Inspector Lamb puts it, "you never can tell what a man'll do if he's pushed too far."  Surprisingly, given such expressed sentiments, no one ever thinks to ask whether Mary Stokes might have been raped.  I suppose this was too blunt.

I found these "bad" characters more interesting than Wentworth's gentry heroine, Cicely (Abbott) Hathaway.  She's a cousin of another of Wentworth's series policemen, the "slim and elegant" Detective-Sergeant Frank Abbott, and the estranged wife of Grant Hathaway, a gentry neighbor of the Abbotts. Another neighbor, modernist show tune composer Mark Harlow, is interested in Cicely, and a good chunk of the novel is devoted to Cicely's romantic travails.

The most interesting quality I found about Cicely was that everyone in the village kept referring to her as "a little brown thing," apparently because she has brown hair and a dun complexion.  I thought it funny that about everyone in the villager referred to her this way--did they get together and hold a meeting about it? No matter, though: Grant and Mark adore her anyway!

Disappointingly, about a third of the way through the novel, Wentworth reduces the list of suspects for Mary Stokes' murder (and that of another woman) to three men: Grant Hathaway (gentry farmer, husband of Cicley), Mark Harlow (show tune composer, hitting on Cicely) and Albert Caddle (uppish chauffeur, no doubt would happily hit on Cicely, but she's out of his league socially, not to mention he's married too, the bounder!).

I was certain I knew who the killer would be, and I was right.  Agatha Christie was never so predictable!

Still, I must admit to a certain fascination with the Miss Silver mysteries, with their strongly-conveyed cozy village settings that seem ever more remote as the years pass.  I will keep reading Wentworth novels. Perhaps the next one will have a better mystery!

Note: Miss Silver coughs twenty-seven times in Eternity Ring.  She should get that cough checked out, I think it's getting worse!