You Pays Your Money and You Takes Your Chances: The Running of Beasts (1976), by Bill Pronzini and Barry N. Malzberg

Note: Today is distinguished crime writer Bill Pronzini's 70th birthday and I wish him a very happy one indeed.  The Passing Tramp

You name your town Bloodstone, says I, you have only yourselves to blame if your town ends up with a serial killer running amok in the lanes! And that's precisely what happens in The Running of Beasts, the first of four collaborative suspense novels by Bill Pronzini and Barry N. Malzberg.

In the 1970s serial killers were not such common fictional malefactors as they have become in the last couple of decades, since the runaway success of The Silence of the Lambs (book and film). Today fictional serial killers bloom like blood red roses.

Bill Pronzini has recalled that when he and Barry Malzberg composed Beasts they were not even thinking of the book as a serial killer novel, but rather "as a different kind of suspense story with emphasis on character."

Kirkus Reviews thought otherwise, decreeing that "this see-how-they-run-from-a-carving-knife account of some mutilation killings in the Adirondacks" offered readers "nothing much to think about," although it was "galvanizing at the gut line."

While I found much more mental fare to chew on in Beasts than did the squeamish anonymous Kirkus reviewer (the novel actually is, as Bill Pronzini has stated, a suspenseful character study; see below), I agree that as a tale of suspense Beasts is fierce.  "Do not read alone at night," breathlessly warned the reviewer for the Detroit Free Press (a comment naturally picked up for blurbage purposes by publishers of paperback reprints of the novel, including Speaking Volumes, who reprinted Beasts in 2012).

When Beasts opens, three women have been viciously slain in Bloodstone, a dying resort town evocatively set in New York's Adirondacks.  Bloodstone's off-season population is all of 453 souls and the place is rather lonely and creepy.  One gets the impression that the Jack Nicholson character in The Shining would have been right at home in Bloodstone!


Apparently the savage slayings are the mad work of a serial murderer, rather unoriginally dubbed the Ripper by locals. Coming to learn just what the devil is going on in Bloodstone are Valerie Broome, a rising New York City journalist, and James Ferrara, a showboating psychiatrist.  Broome herself grew up in Bloodstone (high school class of '65) and is afflicted with bitter feelings about the place, which she found soul-crushingly narrow-minded and parochial.

The narrative primarily moves through the perceptions of Broome and four men: young local journalist Jack Cross (perhaps a little too obsessed with both his still smoking hot mother and his super nifty Superman comic book collection); washed-up actor Steven Hook (a recovering alcoholic, he now earns a precarious living betting on horses at Saratoga); brutish policeman Alex Keller (a sort of Archie Bunker with a sidearm, he lost his job in Chicago after performing quite ignobly on camera at the '68 Democratic Convention); and State Police Lieutenant Dan Smith (increasingly desperate to preserve his diminishing belief in a rational world order and to prevent his ulcerous stomach from perforating during the course of this current investigation).

Other characters include Cross' aforementioned mother, Florence, and his schoolteacher girlfriend, Paula Eaton; Henry Plummer, publisher of the local rag and both the employer of Cross and the lover of Cross' mother; and the racist, sexist and homophobic local bar owner Tony Manders (yup, one of Bloodstone's finest!).

The reader will quickly grasp that the four lead male characters all are undergoing serious mental stresses.  The glib psychiatrist contends that the Ripper has two personalities and that the one is unaware of what the other is doing.  Could this be true?  Could one of these four men, unknown even to himself, be the Ripper? 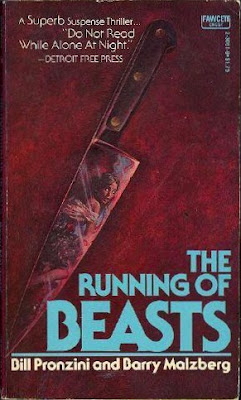 The Running of Beasts is quite a cleverly constructed suspense novel (I must note that I particularly liked the facsimile reproductions of typed pages from Jack Cross' manuscript account of the Ripper killings, which he optimistically plans to publish as a book and make the big time).

Indeed, to grasp it all, readers must make sure they read Beasts to the very last sentence--yes, it's one of those superbly twisty books!

I also think that there is to be found in Beasts a fascinating message, one which dovetails beautifully with the title (something the shortsighted Kirkus reviewer obviously missed; readers will have to read for themselves to see what I mean).

To be sure, mental dysfunction rages rampant in bloody little Bloodstone, but The Running of Beasts appeared, after all, in an era of political assassination and social turbulence, when chaos seemed to have become a permanent part of the modern cultural zeitgeist, so in contrast with the reassuringly rational and ordered world of the classical detective novel, to which this blog is devoted.  And in just a few short years after Beasts was published, just in the United States we saw the rise to grim infamy of the likes of David Berkowitz, Ted Bundy, John Wayne Gacy and Wayne Williams.  As a work of genre fiction, The Running of Beasts may have been ahead of its time, but, frighteningly, as a thematic statement about the human condition it may well have been abreast of it.
Posted by The Passing Tramp at 1:02 AM