One of the great sources of appeal of the early Carolyn Wells detective novels(the ones published up to, say, about 1920) is purely in the physical design: the nicely decorated boards, the thick creamy pages and the beautiful color frontispieces.  John Dickson Carr (1906-1977), a great Carolyn Wells fan as a boy, shortly after WW2 nostalgically recalled "....colored frontispieces....the yellow gowns sweeping the floor, the padded rooms cozy with crime."*

*(Query: first use of the term "cozy" in regard to these sorts of books?)

Here are two examples of Carolyn Wells mystery frontispieces: the first, by Frances Rogers,  from The Clue (1909), and the second, by Gayle Porter Hoskins (1887-1962), from the The Curved Blades (1916). The latter illustrator studied at the School of Art Institute of Chicago and also did a lot of illustrations for western fiction pulps in the 1930s. 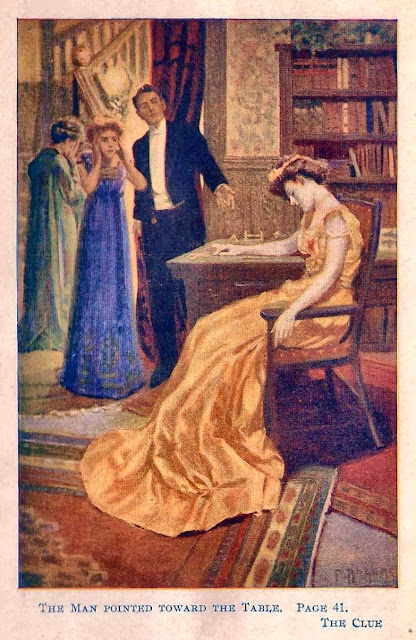 On the right, Cicely Dupuy and Schuyler Carleton confront the dead body of heiress Madeleine Van Norman ("Magnificent Madeleine"). She has been found stabbed in her country mansion, "the finest house in Mapleton [New Jersey]."  A purported suicide note lies on the desk by her side. Is it Murder?!!

Wells lavished her inevitably beautiful young female characters, like Magnificent Madeleine, with detailed descriptions: "Her dark hair, piled high on her head, was adorned with a dainty ornament which, though only a twisted ribbon, was shaped like a crown, and gave her the effect of an imperious queen.  Her low-cut gown of pale yellow satin was severe of line and accented with stately bearing, while her exquisitely modeled neck and shoulders were as white and pure as those of a marble state." 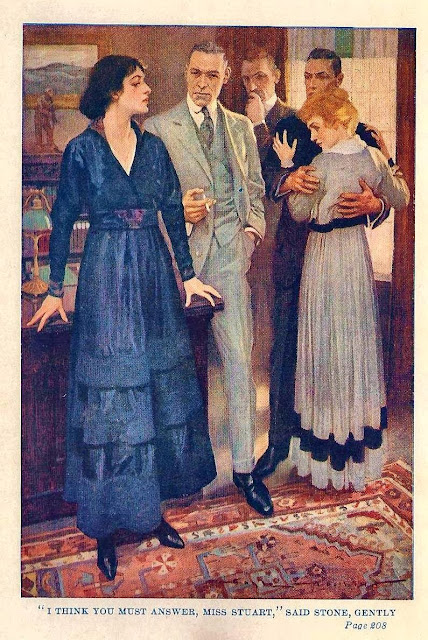 In some ways, The Curved Blades seems a reboot of The Clue.  Like Madeleine Van Norman, Lucy Carrington also is found dead in a chair in her mansion, but in much more (indeed rather splendidly) bizarre circumstances.  I'll be writing more about these books later this week.
Posted by The Passing Tramp at 2:59 AM