Be Careful What You Write: Strangers in the Night (1944) 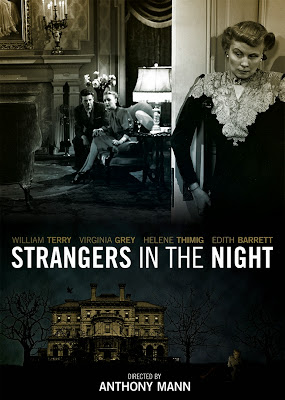 Who doesn't love old dark house films?  Here's a pretty neat one I had never heard of: Strangers in the Night (1944), a suspense thriller adapted from an original story by Philip Macdonald, one of the best Golden Age English mystery writers (it would have been nice to see him in Books to Die For).

Topically set during World War Two, Strangers tells the story of Sgt. Johnny Meadows, a wounded marine who during convalescence writes a woman whose name and address is in a donated copy of A Shropshire Lad.

They begin a long correspondence and when he returns to the States, he is headed to visit the woman, Rosemary Blake, at her home, Cliffside, in a small northern California town.

When Johnny gets there (yes the house is indeed perched on the side of a cliff), after on the train meeting a pretty young woman doctor, Leslie Ross, who just happens to be the new physician in the same town, he is welcomed by a physically disabled, elderly lady--who introduces herself as Rosemary's mother, Hilda--and her nervous companion, Ivy Miller.

Old Mrs. Blake informs Johnny that Rosemary has gone away for a few days and she invites him to stay with her until Rosemary returns.  She shows Johnny a mantelpiece portrait of Rosemary, who is stunningly gorgeous.  But several days go by and Rosemary doesn't return....

Although obviously a low budget B film (see the matte painting of Cliffside above), Strangers was directed by Anthony Mann, who helmed a number of noir crime films including the highly effective, visceral Raw Deal (1948).  It is distinguished by some excellent photography and acting. Unfortunately, William Terry as Johnny is rather bland--a second-rate Ronald Reagan you can't see reading A. E. Housman--but the women are splendid.

Lovely Virginia Grey is credible and intelligent as the woman doctor (her complaints of the resistance she meets in small towns reminded me of Miles Burton's similarly-placed woman doctor character in his detective novel Murder, M. D., published just a year earlier, 1943); yet the real stars are Helene Thimig as Hilda Blake and Edith Barrett as Ivy Miller.

Thimig is rather extraordinary portraying a woman who, it becomes increasingly clear, is Hiding Something.  Her greatest moment in the film occurs when she makes her Big Revelation, as Mann has the camera movie in ever closer on her face.  I found this genuinely riveting.  Thimig was an anti-Nazi Austrian actress who appeared in some notable WW2-era American genre films, such as Isle of the Dead, Cloak and Dagger, The Locket and Cry Wolf.

Equally good is noted stage actress (and first wife of Vincent Price, with whom she had a son), Edith Barrett.  Her increasingly desperate unease is so well-conveyed.  I found myself following her every nervous movement and anguished facial tic.  Besides playing Mrs. Fairfax in the Orson Welles-Joan Fontaine Jane Eyre, she did the horror films I Walked with a Zombie and The Ghost Ship and the thriller Ladies in Retirement.

The relationship between these two women had something of the unnerving claustrophobic quality of the later iconic film Whatever Happened to Baby Jane?  Unfortunately the climax gets increasingly improbable and over-the-top (especially the "poetic justice" ending), but as fan of this sort of film I definitely can say I enjoyed it.  It's available on a good quality DVD, but unfortunately a bit pricey.  It's nice so many of these older genre films are becoming available, I just wish the prices would come down a few dollars!
Posted by The Passing Tramp at 11:16 AM