"Love is bad for conversation; dead love, I mean."

Cornell Woolrich (1903-1968) was one of the great mid-century American writers of suspense and noir fiction, a favorite of Alfred Hitchcock and other film directors (oddly, as mentioned here last week, he was left out of the award-winning Books to Die For).

Besides his celebrated "Black" series of novels (The Bride Wore Black, etc.), Night Has a Thousand Eyes and other notable novels, Woolrich wrote over 200 short stories and novelettes. Several of the latter are available as nicely produced e-texts, produced by Renaissance Literary & Talent.

Originally published in Detective Fiction Weekly, it is a plot-driven story, with a (mostly) fairly-clued mystery problem concerning the series of suicides in room 913: why are people leaping out the window of the room to hurtle to their deaths?

To be sure, there is a great opening line--"They thought it was the Depression the first time it happened"--but mostly readers will read on simply to follow intrepid "hotel dick" Striker as he searches for a solution to the mystery.  There are floor plans, various eccentric suspects and a delightfully loopy explanation that seemed one part John Dickson Carr and one part R. Austin Freeman.  Good stuff.

Murder, Obliquely was originally published in 1957 in The Shadow Mystery Magazine, as Death Escapes the Eye.

Woolrich heavily revised it the next year for his 1958 Dodd, Mead collection, Violence, under the elegant minimalist title Murder, Obliquely.

Said to be the last story that Woolrich wrote in first person narration from a woman's perspective, it is a remarkable piece of crime fiction.

Nothing that happens in the tale particularly surprised me, but it's a gripping story of obsessive love, both that of the narrator, Annie Ainsley, for Dwight Billings, and of Dwight Billings for Bernette Stone.

Annie describes herself, with brutally frank self-awareness, as "the fifth wheel on the wagon.  The other girl they had to ring in an extra man for, on dates.  She never brought one of her own along. Never had one to bring."

Meeting Dwight for the first time, she falls immediately, and hard:

He was tall and he was thirty-five; brown eyes and lightish hair, blond when he was still a boy.  He was like--how shall I say it?  Everyone's glimpsed someone, just once in her life, that she thought would've been just the right one for her.  I say would've, because it always works out the same way. Either it's too late and he's already married, or if he isn't, some other girl gets across the room to him first.  But it's a kindly arrangement, because if you had got across the room to him first yourself, then you would have found that he wasn't just the right one for you after all.  This way, the other girl is the one finds it out, and you yourself don't get any of the pain.

Annie has a sharp and sardonic sense of observation.  Here she is on Bernette: "She stood there like a mannequin at a fashion display modeling a mink coat.  Even the price tag was there in full view, if you had keen enough eyes; and mine were.  Inscribed 'to the highest bidder, anytime, anywhere.'"

And on Bernette's recently acquired husband, picked up in a gambit to make Dwight jealous:

He was a good deal younger than either one of them, particularly Dwight.  Twenty-three, perhaps, or five.  He had a mane of black hair, a little too oleaginous for my taste, carefully brushed upward and back.  It smelled a little of cheap alcoholic tonic when he got too near you.  He had thick black brows, and the sort of a beard that leaves a bluish cast on the face even when it is closely shaven. He was good-looking in a juvenile sort of way.  His face needed a soda-jerk's white cocked hat to complete it.  It was crying for something like that; it was made to go under it.  And something told me that it had, only very recently. 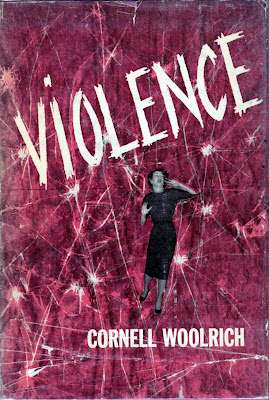 It's the acutely observed writing that makes Murder, Obliquely so memorable.  Here's one more example, from when Annie is finally making her play for Dwight:

"Did I get you out of bed?"
He smiled.  It was a sort of vacant smile.  The smile with which you wait for someone to go away. The smile that you give at a door when you are waiting to close it.  Waiting to be allowed to close it, and held powerless by breeding.

I've seen the question debated about whether men can "write" women, but I think Woolrich does a powerfully convincing job with Annie Ainsley.

Of course, people will point out that Woolrich was an unhappy man, living a lonely life himself. They will see the author's personal circumstances being poured into Murder, Obliquely, with Annie as a surrogate for the author.  But whatever exactly made it, it makes a great tale based on those classic Cornell Woolrich themes, love and death.

There are five of these Cornell Woolrich tales available as e-texts.  I'll certainly be reading them all.
Posted by The Passing Tramp at 3:20 AM