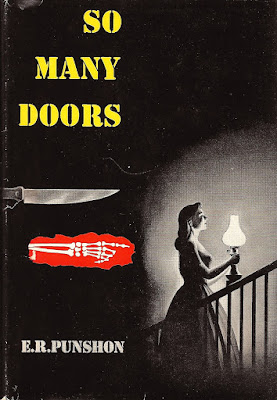 Crime detection at its exciting best!

This fascinating tapestry of murder and superior detection is a prime example of the classic type of mystery story--a story whose ingenious kinks and turns absorb you, while its intense scrutiny of clues will keep you agog with anticipation.

E. R. PUNSHON was inducted into the London Detection Club by the late G. K. Chesterton, then president.  This club was founded with the idea of bringing together mystery writers who were willing to aim at high literary standards, and who believed that in the mystery novel "the reader must always be given fair play...."

--From the front and back flaps of the American edition of E. R. Punshon's So Many Doors (Macmillan, 1950)

Does "intense scrutiny of clues" keep mystery readers "agog with anticipation" these days?  Did it in 1950?  Apparently someone at Macmillan thought so. Or, possibly, they were making for traditionalists the most that they could of Punshon's perceived strengths as a mystery writer in an era when, to generalize, male readers of crime fiction were turning increasingly to hard-boiled novels and women to so-called domestic suspense. 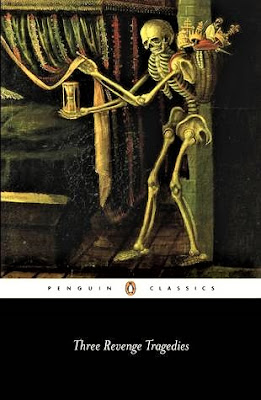 Taking note of the 17th-century stage origin of the title of So Many Doors, Anthony Boucher, then dean of American mystery critics, praised the "Elizabethan, even Jacobean" aspect of the novel in its compulsive chronicling of the "obscure destinies that drive [Punshon's] obsessed and tormented characters, and...the frightful violence that concludes the story." These were qualities that should have appealed to mid-century American readers, yet they may have been obscured by Punshon's deliberate narrative style for most of the novel.

For much of the novel Punshon's charming series sleuth, Bobby Owen--now, in his 26th novel appearance, ranked a Commander in Metropolitan Police (more on this below)--is trying to determine what happened to to Isabel Winlock, a respectable young woman who has run off with Mark Monk, a magnetic male of doubtful character who is suspected of having done in his wife.

Monk has a connection to Bexley House, a great Thameside mansion from "the days when domestic help was cheap and plentiful and and no one dreamed that it would one day very much be the reverse."  The once abandoned house seems to be the locale for gambling and black market activities, and there's evidence that someone--Mark Monk? Isabel Winlock?--was done in there, evidently stabbed, not long before Bobby pays Bexley House a visit.

Eventually Bobby's investigation of this most mysterious matter takes him to scenic Cornwall, specifically the old tin mining district around Redruth. What does he discover there? Read the novel and find out!


Now, about Commanders on the Metropolitan Police.  Some people have commented that Bobby's rise in Scotland Yard seems meteoric.  Bobby was still a sergeant in 1939, when he left the Yard to join the police force in Wychshire, where he spent the war years as an inspector and later deputy chief constable.  Returning to London in Music Tells All and The House of Godwinsson (both 1948), Bobby is made a deputy assistant commissioner, the equivalent of deputy chief constable, but by So Many Doors he has become a Commander, reflecting the recent creation of the rank of commander out of junior DAC's.

For comparison, PD James' Adam Dalgliesh started off as an Inspector in Cover Her Face (1962), but had made it up to Commander by The Black Tower (1975). It took Bobby about fifteen years to make it up to deputy assistant commissioner (if you think this was too fast, blame Wychshire, not the Yard), but then he was a lot younger than Dalgliesh.

Or maybe not.  Bobby starts off the series at about age 23 and ages more or less naturally as the series progresses over the next 23 years, so at the end of his recorded career he's about the same age as Dalgliesh, who starts off in his forties, I believe, but never seems to age over the 46 years of cases chronicled by James. Good thing too, because had he aged naturally Dalgliesh would have been around 90 at the time of his last case!

More on the next Bobby Owen novel in the series, Everybody Always Tells, coming soon. If So Many Doors bears resemblance to Christie, Tells brings in bit of today's birthday boy, John Dickson Carr.
Posted by The Passing Tramp at 11:11 PM