Beware the Bushmaster! She Walks Alone (1948), by Helen McCloy "Tony, did you ever hear of the Emperor Yao?"

"He ruled China in its Golden Age.  There is a saying about the peacefulness of his reign. 'In the days of the Emperor Yao, a virgin with a bag of gold could walk alone from one end of the Empire to the other without fear of being molested.'  Since then, times have changed."

She Walks Alone (1948) was the tenth crime novel American mystery author Helen McCloy (1904-1994) published over a productive first decade of crime writing.  Six detective novels featuring her series sleuth, psychiatrist Dr. Basil Willing, appeared between 1938 and 1943, but Willing's appearances in her novels would diminish relatively in the decades that followed.

Five Basil Willing novels were published between 1945 and 1956, along with five non-series novels. Over the rest of her writing career McCloy produced only two additional Basil Willing adventures in novel form, the beguiling Mr. Splitfoot (1968) and her final crime novel, Burn This (1980). Meanwhile during this comparative Willing drought she published ten non-series novels, beginning with the eerie The Slayer and the Slain (1957) and ending with The Smoking Mirror (1979).

In short, Helen McCloy's career as a crime writer reflects the wider movement within mystery fiction away from the pure, clue-puzzle detective novel toward the realistic and psychological crime novel. Strict detection (though with strong doses of psychological theorizing) predominated in McCloy's output in the late Thirties and early Forties, only to be gradually superseded by psychological suspense (what is often called "domestic suspense" today).

The Basil Willing novels The Goblin Market (1943) and The One That Got Away (1945) incorporate topical espionage elements, while the non-series Do Not Disturb (1943), reviewed by John Norris, is a flight-and-pursuit tale and the non-series Panic is a housebound girl in peril story. (Take a beautiful girl; isolate her in a remote cottage in the wooded Adirondacks; inject an ominous note of peril...and you have--PANIC, runs the jacket blurb).

At the same time there is a pronounced intellectual aspect to Panic, in that a good deal of the novel is devoted to some quite complex code-breaking.  Anyone who hated that element in Dorothy L. Sayers' Have His Carcase probably will hate it in Panic as well.

She Walks Alone is something of a similar hybrid. Knowing the outline of the plot beforehand--a woman on a ship traveling the Caribbean finds herself entrusted with a packet of $100,000 that people prove quite willing to kill to obtain--I was expecting pure suspense.

Yet in reality the story is a quite complexly structured and plotted affair that reminded me of a detective novel without a strongly marked detective presence for much of its length. The first part of the novel comes in the form of a first-person narrated manuscript detailing recent events, while the second part switches to present time, as Captain Miguel Urizar, of the police force of the Caribbean island state of Puerto Vieja, appears on the scene.

At the request of the ship captain, Urizar, whose viewpoint this section adopts, investigates a mysterious death on the ship. This marks a return engagement on his part five years after The Goblin Market, wherein he appeared with Basil Willing.

Then we go back to another manuscript portion (a different one this time), then to a finale in third person.  It may seem odd and overly structured as you are reading, but all is justified by the finale. You may figure out what is going on before the reveal a few pages before the end of the novel, but even so you should still admire the cleverness of it all. 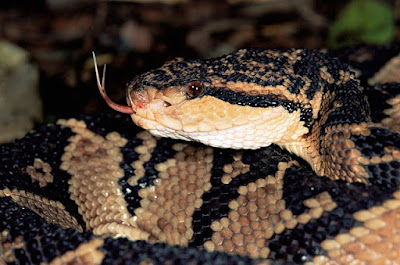 Arguably McCloy over-intellectualizes the novel, going into lecture mode occasionally (McCloy seems quite obviously to have been a New Deal Democrat, progressive on both economic and social issues of her day that now more than ever seem not to have ever actually left us); and the novel is not as gripping as it could be, considering that we are presented with a "girl in peril" and that, as the splendid GP Micklewright jacket of the English edition reveals, one of the human victims on the ship is a beautiful women (not the girl in peril), bitten by a deadly bushmaster snake (just think what John Dickson Carr does with snakes in He Wouldn't Kill Patience). Still, I recommend this cleverly wrought piece of crime fiction.

See also Mike Grost on Helen McCloy's writing.
Posted by The Passing Tramp at 12:41 AM