This is a deplorable book, full of preposterous characters, not one of whom can be admired even for his vice.  Professional detection is nil, and the amateur halfhearted; the real heroine, if any, is mentally deficient; and the three murders are uninteresting and crudely carried out.

Well, I liked it!  Double Doom, I mean.  I liked it both times I read it, the first more than a decade ago and more recently this summer.

As inflexible aesthetic ideologists of the traditional, ratiocinative detective novel, academic Jacques Barzun (1907-2012) and his longtime friend and colleague Wendell Hertig Taylor (1905-1985), were loath to allow into the form too much of that which savored of the depressing real world.  In their favored "light" reading the two men intensely disliked perpetually depressed characters and downtrodden detectives, so it is not surprising that Double Doom got two decisive thumbs down from the pair.

However, at the time of the publication of Double Doom, a period when mystery critics were avidly embracing greater realism in tales of crime--after all, crime frequently is rather a sad and degrading thing in real life--he novel received generally good notices. 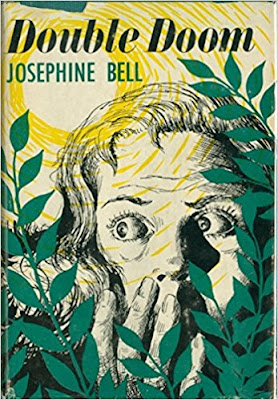 The review of Anthony Boucher, dean of American crime fiction critics, was not, in a way, so far removed from that of Barzun and Taylor, except in that what the two academics saw as contemptible, Boucher deemed praiseworthy.  In Boucher's eyes Bell's "portrayal of a 38-year-old woman with a mental age of 12" was "extraordinarily moving." He believed that this portrayal gave "rewarding substance to an otherwise dullish puzzle."

In essence Boucher's review concedes the central criticism of B&T while putting it aside by praising the mystery for a purely novelistic quality: the depiction of the plight of someone with a developmental disorder. To this B&T would have responded, no doubt, that had they wished to read about developmental disorders in a work of fiction, they would have sought out a "true" novel, not a detective story.  Never the twain shall meet, was the motto of B&T, but they were fighting against the temper of the times.*

*(I should note that Agatha Christie's own depressing genteel Fifties family dysfunction novel, Ordeal by Innocence, was published the next year and that the ever-reliable B&T didn't like it either: "A very unpleasant group of ill-assorted adopted children, finding that one of their number must have murdered their 'mother,' spend most of the book wondering which one did it.  Detection nil, entertainment ditto."  Once again I beg to differ with this B&T assessment.)

For my part, I thought the Double Doom had a better puzzle than B&T and Boucher allow, and I also found the characterization and dramatic situation in the novel quite interesting.  I think the accusation that the book is "deplorable" is absurd. What is deplorable, one might argue, is the implication that one ought not write about "mentally deficient" characters in a detective novel.

Double Doom gets its title from the dual deaths of twins Hugh and Hilary St. John Strongitharm, gentlemen siblings of Marsden House, in the village of Farthing-on-Hone.  When the novel opens Hilary Strongitharm has died unexpectedly in hospital, while Hugh has only just expired from exposure to deadly fumes in the family's greenhouse.  What the twin deaths disturbingly have in common is that they were in fact mortal exits precipitated by malign human agency. 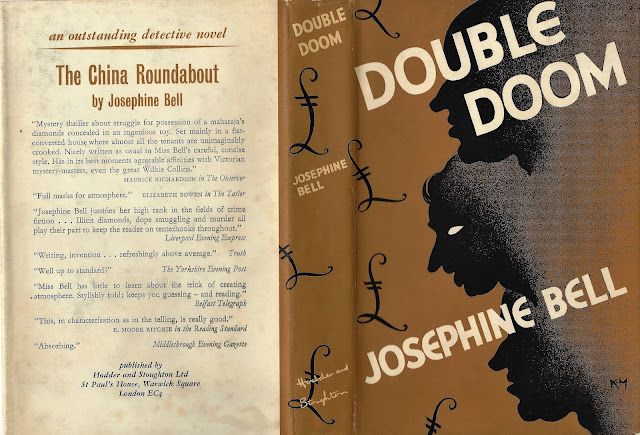 Double Doom is basically a country house and village mystery (though where you have a Josephine Bell book there usually will be, as here, a prominent place for a hospital and its personnel as well). As such, I found Double Doom an excellent example of the subgenre from the 1950s, when country house tales were becoming rather  thinner on the ground, so to speak.  The postwar years were not a great era for country houses in fact, and English crime fiction, once the glorifier of the country house, reflected the times.

Since the late world war the genteel Strongitharm brothers--born, like the author, shortly before the turn of the century--basically had just amiably pottered around at Marsden House, where they lived off their inherited income with their blind octogenarian stepmother and her late-in-life daughter, Joyce, the aforementioned 38-year-old with the mind of a 12-year-old.  Then there are old Mrs. Strongitharm's redoubtable personal maid, Mabel; two dailies, a cook and a housemaid, from the village; and Mrs. Stringer, who comes in three days a week to do the "rough." Nary a butler in sight!

There is also Mrs. Strongitharm's attractive but brassy village neighbor and reader, Diana Fawcett, called "Mrs.," though a husband is not anywhere in evidence.  Others who come around to Marsden House are the bespectacled Strongitharm family attorney, Lionel Pusey, and kindly Fiona Goddard, wife of Bill Goddard, the doctor who treated Hilary Strongitharm. Fiona effectively functions as the reader's surrogate, though good chunks of the novel are seen instead through the rather hazy perceptions of the nearly middle-aged but perpetually childlike Joyce.

I think Josephine Bell displays a fine eye for social detail in this milieu, as when she notes Diana Fawcett's lack of ease around 'perfect maid" Mabel, whom she suspects views her as a vulgar and common interloper at Marsden House:

She was always a little afraid of Mabel.  It was totally beyond her power to get behind that perfect facade of willing, respectful service.  She had never in her life employed a well-trained, superior servant, only a succession of half-competent daily helps, who treated her with the easy familiarity of modern social conditions.  Mabel was an anachronism, like her mistress, but none the less formidable on that account.

Doubtlessly B&T found this novel unpleasantly offputting because it is offputting--or at least the characters are.  Josephine Bell had an unnerving tendency to "tell it like it is"--at least, let me emphasize, tell it as she saw it; and this tendency is evident in Double Doom.

What I find striking in Double Doom is how simply vexing most of the characters deem the existence of Joyce--even the ones who actually try to sympathize with her.  Some are frankly only appalled by her, like lawyer Lionel Pusey:

A little wave of disgust swept though him.  All this fuss, all this thought, about the future of that scatty object.  Why didn't they allow them to be put quietly away as children?  'They had no future, anyway.

This is a chilling passage, and I don't mean to suggest that Bell shared the sentiment, but everyone-- even as I wrote above, the more sympathetic people--view Joyce not so much as a person but as a problem.

Bill Goddard, the tale's main doctor, once refers to Joyce offhandedly as "the nit-wit," while another physician, Dr. Matthews, admits, "I feel ashamed of myself for resenting her, but I do resent knowing there is absolutely nothing to be done to help her."  Later on, he reflects of Joyce, in a passage that seems to regret the social mobility which took place in the UK during the late Victorian era and the twentieth century:

If she had been born of humble parents a hundred years ago it [her "mental deficiency"] would have been overlooked.  She would not have been expected to reach a high standard of academic knowledge.  Not even to read and write.  Her parents would not have achieved any of those skills.  She would have learned housework and cooking and the care of children, and she would not have felt inferior, or not often.  We have very exalted standards now.  We do not approve of people who must be termed "simple."  There is no place for the unfortunate Miss Morleys.

When Fiona meets Joyce, she is aghast to discover that Joyce has normal romantic/sexual feelings:

Fiona was speechless, and against her will, against her true feeling of compassion, repelled.  She could accept Miss Morley, plain, thickset, middle-aged, as a child, an innocent child; but as an adolescent, and a knowing one at that, no--it was too much, it was repulsive.

Then there is this brutally frank exchange that takes place between old Mrs. Strongitharm and Fiona:

"You are very kind to my poor child," murmured Mrs. Strongitharm.

"I keep reminding myself how young she really is, and then it isn't difficult.  For a short time, anyway."  She paused and went on.  "It is usually easy to follow a principle for a short time, isn't it? Keeping emotional prejudice out of the way.  Like the colour bar.  I mean, I think it's wrong, and I don't feel it, if I meet them only for a short time.  We get a lot of different races of foreign doctors as residents at the hospitals, and foreign surgeons coming from time to time to talk to my husband and the other specialists.  Bill brings them out to out house occasionally, and it all goes off very well.  But I know it would be different if there were more at a time, or I lived where they were in a majority.  I should still believe the principle was right, but I might not follow it emotionally.  So if I lived with Miss Morley, or if one of my own children--"

She broke off, afraid that she might have gone too far.

"Yes," sighed Mrs. Strongitharm.  "Time does not make it  any better.  Rather the opposite."

What a bleak passage this is: "Time does not make it any better.  Rather the opposite."  One would love to sympathize with the obviously suffering Mrs. Strongitharm in this novel, but she's such a stiff upper-lipped, emotionally shuttered Englishwoman, it's challenging, I suspect, for the modern reader (perhaps even the Fifties one).

And, oh! Fiona, darling.  I note the line "Fiona was honest," followed by those casual "thems" and "theys"--damning signifiers of ever-so-nice, educated and progressive Fiona's underlying, and perhaps unconscious, racism.

Does Fiona voice the author's own views here?

Given Bell's portrayals in her first detective novel, Murder in Hospital, which I reviewed here four years ago, she may well be doing so.  Certainly, Fiona, with her doctor husband and three children living contentedly in the country sounds a lot like Josephine Bell, who before her husband's death in an auto collision, it appears, had moved with him and their four children to a village near Guildford, Surrey.  But, on the other hand, Fiona may simply be a realistic character for her time and place.  (There are similar depictions of characters in Christie's Ordeal by Innocence.)

Or, more insidious thought yet, Fiona may be a realistic character for this time too, given recent events in the US and UK.  Should we fault Bell for portraying people as they can be, and all too often are--i.e., flawed and not always moved by the better angels of their natures?

And Bell is right about one thing: the issues that Joyce presents to people are not easy ones with which to deal, not by a long chalk.  To be sure, Bell is more of a Debbie Downer than a Suzy Sunshine for pointing this out, but sometimes it's Debbie's writing rather than Suzy's which we want (some of us anyway).

Joyce is poignantly aware, after her own manner, of the problem she presents to everyone around her and the concomitant shying away from her emotionally:

"Why are you so kind to me?" she asked, with a certain awkward dignity.  "You can't like me.  No one does.  I'm too different."

How about the mystery, some may be asking--We thought that you, Passing Tramp, author of Masters of the "Humdrum" Mystery, cared first and foremost about such things?  Well, guess what, I found the mystery plot an engaging one, with suspense and clues and the whole bag of tricks. One of Bell's better plots indeed.  All this make Double Doom one of my favorite mid-century British detective novels, certainly on par with efforts by some of her better-known compatriots at the time, like Christie and Ngaio Marsh. Strongly Recommended.
Posted by The Passing Tramp at 5:49 PM