The governing body of each of Texas's 254 counties is the commissioners court.  In Texas the court has five members: the county judge and four commissioners.

Rhodes tried the door, and the knob turned in his hand.  He wasn't surprised.  Hardly anyone in a town like Thurston bothered locking the door.  There hadn't been a major crime there in quite a while, and only a few minor ones.  Not counting armadillo hunters. 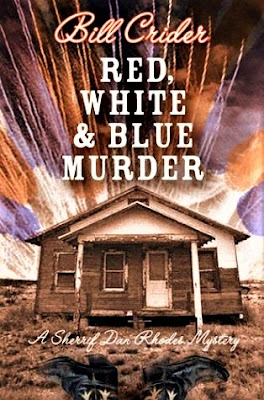 I wrote about the Texas regional background of Bill Crider's Sheriff Dan Rhodes' mysteries in my blog piece on A Romantic Way to Die (2001), the eleventh Dan Rhodes mystery.  Red, White and Blue Murder, the next installment in the series, followed ARWTD by two years, seeing light in 2003.

This one takes place over a few 95 degree days around the Fourth of July, a time when Americans celebrate the greatness of their nation by attending patriotic parades, blowing up fireworks and eating themselves sick on barbecue and ice cream.

But not barbecue ice cream, one hopes! Don't think there isn't such a thing.  Ick.

Blacklin County's Sheriff Rhodes, who is getting awfully tired of people asking him if it's "hot enough for you," finds himself embroiled in another great American tradition--murder--when he is called to investigate the suspicious death of electrical repair shop owner Grat Bilson--whose preoccupation, up until his death, was getting fireworks banned throughout the county.  (Though they are a fire hazard, particularly during 95 degree weather in July, only Blacklin County municipalities have up to this point banned them.)

Bilson is found dead in a burned-out home--and he did not die either from the fire (which, it transpires, was deliberately set) or from natural causes.

It turns out that he may have been the informant for local reporter Jennifer Loam who was filling her ear with tales of corruption in high places, including in the sheriff's office itself.  Moreover his wife was having affairs and he may have been having one himself.  So there were more than a few people who might have had reason to want to kill old Grat Bilson.

Soon Bilson's murder is followed by another suspicious death, which takes place picturesquely at a barbecued ribs eating contest on the Fourth--and it looks to the locals like Rhodes himself, who was one of the contestants, may be the killer!

Red, White and Blue Murder is pretty action packed by the standards of this country casual series, with Sheriff Rhodes getting attacked and/or shot at by four different people during the course of his murder investigation, not to mention nearly blown up in a fireworks stand explosion.  This is not as amusing a book as A Romantic Way to Die, with its send-up of the romance novels industry, but it has a good mystery involving local political corruption--another great American tradition--and the writing is as pleasingly droll as one expects from a Crider (see the second quotation at the top of this piece, with its classic Crider qualifying "afterthought" sentence.)

If you like rural local color in an American mystery, the Crider Sheriff Rhodes books are a must.  To me they are cozies--in fact I'm rather reminded, with the usual stuff involving Rhodes' pet dogs Yancey and Speedo, of MC Beaton's Hamish Macbeth series, though Crider's mysteries are much better plotted, to be frank--but cozy mystery is another great American tradition (a happier one this time ); and I hope to review some more modern American cozies this month.  Meanwhile I'm looking forward to a modest cold front coming through here where I live, where the last few days it's been, well, around 95 degrees.

That's hot enough for me!