Who Dun It? The Authorship of the Early Q. Patrick Novels

We enthusiasts of the Golden Age--or GADers as I will call them in honor of the original Golden Age Detection group at Yahoo which served, as the intellectual seedbed for much of the modern internet crime criticism that has done so much to catapult its current revival (more on this soon I hope)--have discussed many topics over the years, but one which has especially engaged a number of us is the question of the authorship of the of the books by Patrick Quentin, Q. Patrick and Jonathan Stagge.  This is a subject Mauro Boncompagni and I both have tried to clarify over the last several years, and I'm feeling more confident about the matter these days.  (See essays in Mysteries Unlocked and Murder in the Closet; more as well is forthcoming.)

Here is how I see the breakdown of the earlier books:

Q. Patrick Books
Cottage Sinister, 1931 (Richard "Rickie" Wilson Webb and Martha "Patsy" Mott Kelley)
"Q. Patrick" was created when two people living in Philadelphia, native English pharmaceutical executive Rickie Webb and recent Radcliffe graduate Patsy Kelley, combined the first syllables of their nicknames "Patsy" and "Rickie" to make Patrick. (Cute, huh?)  The "Q" was chosen, in their words, as the most "intriguing" letter of the alphabet, and you can draw your own conclusions from that.  The duo went detecting again in a second novel, called

Murder at the Women's City Club, 1932 (less straightforwardly but more alliteratively titled in the UK Death in the Dovecote) (RWW and MMK)
Patsy became engaged and married in England in 1933, leaving Rickie rather  in the lurch.  So Rickie wrote the next Q. Patrick by himself.  This book appeared in February, not long before Patsy's spring wedding, and was titled 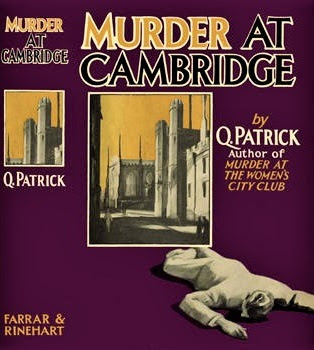 Murder at the 'varsity, 1933 (Murder at Cambridge in the US). (RWW)
The English edition preceded the American one by about a month, but I think for today's readers the American title is the better one.

Rickie, however, liked collaborative writing, plotting being his first love, and the actual writing second.  So he found a replacement for Patsy in another talented Philadelphia woman, Mary Lou White (later Mary Lou Aswell, and as such a very prominent American literary editor).  Together in October 1933 they published

S. S. Murder, 1933 (RWW and Mary Lou White)
On a visit to London in 1933, however, Rickie met a brilliant and handsome newly minted college graduate who was desperately keen to write fiction, become rich and successful and see America: Hugh Callingham Wheeler.  With Rickie's considerable help in the earlier years, Hugh would attain all of these objectives.

Hugh went to live with Rickie in Philadelphia and the two would establish a personal and commercial partnership that would endure for nearly two decades.  Yet it's still not established quite which books they wrote together. (Like with Ellery Queen, Rickie tended to be more the plotter and Hugh more the actual writer).  Nothing appeared from Q. Patrick in 1934, but then a flood of works appeared in 1935-37, both in hardcover and serial forms.  There was so much stuff, indeed, that the pair created two new pseudonyms, Jonathan Stagge, and their best known one, Patrick Quentin.  Then there appeared the most famous Q. Patrick novel 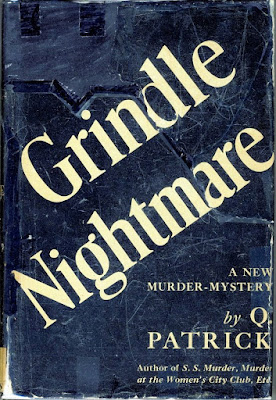 The Grindle Nightmare (1935) (RWW)
Originally published serially in May as Darker Grows the Valley, this novel has long been attributed to Rickie and to Mary Lou White, but in fact is copyrighted solely to Webb, as Mauro Boncompagni has pointed out.  But it never really made sense to think that Mary Lou would have co-written this book with Rickie, when Rickie was living, and had begun writing, with his protege Hugh Wheeler.  The bigger question would be, was Hugh involved in writing this book?  I think Hugh may have influenced it thematically (at the least, they would have been discussing the book, and Hugh would have been typing it), but it very much seems to me like a Rickie book, as does the next Q. Patrick

Death Goes to School (1936) (RWW)
This was published in February, about six months after Grindle was published as a book, and is a public school mystery.  Again, it is copyrighted solely to Rickie, as Mauro has pointed out, and in fact is dedicated to his parents, who were the headmaster and mistress of a girls school.  There's even a character with the same surname as Rickie's mother's family.  I'll be reviewing this book here soon and pointing out a few "Hugh" elements in it, but it still seems a Rickie book to me.  The big changeover came with the next Q. Patrick novel, which also introduced a new series detective, Lieutenant Trant (the first six QP's were standalones)

Death for Dear Clara (1937) (RWW and HCW)
Here there is so much more emphasis on "Hugh" elements: American moneyed society setting, sophisticated detective, lovely and lethal women, emotions and pure writing.  The first six Q. Patrick books, while fluidly and intelligently written, are much more single minded in their emphasis on clues and investigation and sparer in their portrayal of emotions and characterization.  And, yes, this book is copyrighted to both authors, as are the first Patrick Quentin, A Puzzle for Fools, and the first Jonathan Stagge, The Dogs Do Bark, both of which were published in 1936.  My own theory is that the first works really written more by Hugh were the 1935-36 serialized Hugh Westlake adventures, later published as Stagge novels.  That may be why Hugh Cavendish Westlake shares Hugh Callingham Wheeler's first name and initials.  A little hint of things to come, perhaps?
Posted by The Passing Tramp at 6:28 PM