Note: On the Hall-Mills murder case, one of the most notorious in Twenties America, see Part I of Tony Medwar's piece here.


S.S. Van Dine’s two articles on the Hall-Mills murder case, which were published on November 6 and 7, 1926 in the New York Times-Herald, were credited to ‘Philo Vance,’ “the ‘psychological detective’ hero of SS Van Dine’s mystery tales”--although his first investigation, The Benson Murder Case, had only just been published in October 1926.

The first article, ‘Psycho-Analyzes Crime As Terrible Partnership Murder', dealt “particularly with the importance of individual psychology in crime detection and a generalization on its application” to the specific case, while the second, ‘Confession Would Upset Crime Construction is Deduction of ‘Sleuth,’’ examined the individual figures in the case.

Both articles, which were syndicated and published across America, were prefaced with the blithe statement that “It is to be understood that any theory presented is purely conjectural.”
In the first article, name-checking Corot, Ibsen and Shakespeare, ‘Vance’ begins by highlighting what he called “the nature of the night” and the “needless cruelty” in the fact that Eleanor Mills had been shot three times and had her throat and tongue slit while Hall had only been shot once. He emphasized that

every murder differs from every other murder – each one has its own set of conditions and circumstances as well as peculiarities, which indicate the character and temperament of the person who committed it.

In this way, he went on, “clues count for very little against the psychology of a crime [for] the psychology of the crime and the murderer remains the same and cannot be changed or obliterated.” This was just as well given the murders were already four years old while all of the clues, material evidence and witness accounts were “jumbled together in what appears almost chaos.”


‘Vance’ then focused on the “theatrical tableau” of the two bodies

not left as they fell but carefully, almost lovingly, rearranged side by side and with locked arms. Their love letters are scattered over them with a gesture of poetic melodrama. The Minister’s card is placed near the body, perhaps to identify him.

Vance asked readers to consider whether it was

a man’s crime, or a woman’s crime. Would a woman have used a gun in this direct and efficient way and murdered both of them? On the other hand, would a man have slashed the woman’s throat and arranged the bodies and strewn them with love letters?”

This led him to conclude that, “from the psychology of the crime and its setting, you may reconstruct a terrible partnership murder with two or more persons participating.”

In his second article, ‘Vance’ argued that “only a confession will clear the Hall-Mills murder mystery of any considerable percentage of persons” but he went on to doubt that there would ever be any such confession and emphasized that his conclusions should not be interpreted as implying that any of those on trial were guilty or innocent:

I find it difficult – almost impossible – psychologically to fit all of these persons to the hysteria of the scene that must have been enacted under the crab apple tree that fatal night … There has been so much ‘covering up’ by dozens of people, so much that has been hidden, so much that is still hidden, that such confusion is only natural.

There were, he suggested, three possible solutions:

One type of person could have committed [the crime] but several, perhaps, added finishing touches;

Or it could have been committed by that type of person and others, surprised and startled by what had happened, could actually have gone to the scene without participating.

Or, thirdly, it could have been committed by more than one person, each using a different method of death and different degrees of violence, based on their different psychologies.

After delineating a psychological portrait of the three defendants, ‘Vance’ invited the reader to consider which possessed “a nature consistent with all the features of the crime”:

1 Seeking or finding Dr Hall and Mrs Mills at their rendezvous;
2 Drawing a gun and shoot[ing] first Dr Hall;
3 Then Shooting Mrs Mills three times;
4 Slashing Mrs Mills’ throat, presumably with a razor;
5 Laying out the two bodies with linked arms as if for burial;
6 Scattering the love letters of the murdered pair over them;
7 Placing the dead minister’s card near his body.

These were features from which, in the view of ‘Philo Vance’, certain implications could be drawn ... leading him to conclude that

several apparently conflicting and even opposite, emotions actuated whatever person or persons were present at the scene – one emotion being murderous and vindictive, another emotion being hysterical and disorganized … and still another emotion being sentimental and dramatic … does [that] fit any one of the defendants? Or does it coincide with any other person who might have committed the murder? Or does it imply a murder by more than one person?

For perhaps obvious reasons, Van Dine did not complete the article by providing his own answer to these questions.  He cautioned those who did:
You might be wrong for the probing of the human heart is a tremendous and tricky task. As we yet know little of the hidden impulses of the heart and intellect working in conjunction.

However, on 3 December 1926, in a verdict that one suspects would not have come as a surprise to SS Van Dine, the jury returned a Not Guilty verdict and the three defendants were acquitted. Carpender died in 1934. Henry Stevens in 1939 and his brother William in 1942. Frances Hall also died in 1942 and she was buried, like her husband, in Green-Wood Cemetery in Brooklyn, New York.No one has ever been convicted for the murders. 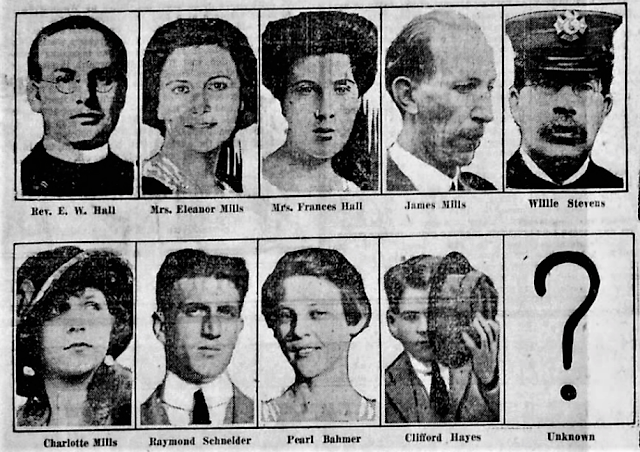 Next up, S. S. Van Dine personally encounters true crime in The Pajama Murder Case, Tony's third guest post.  I'll be posting it later today, it's simply fascinatin'!
Posted by The Passing Tramp at 2:51 AM