Hercule Poirot is now one of the most visualized fictional detectives in history through the medium of film, having been played by a succession of famous actors--Tony Randall, Albert Finney, Peter Ustinov, David Suchet, Kenneth Branagh, John Malkovich--over the decades.  Indeed, he's starting to rival Sherlock Holmes in this respect.  And before all that, illustrators liked to portray him on books.  The "book cover Poirot" I personally remember best is the Albert Finneyish one who used to appear, after the actor's Oscar-nominated appearance in Murder on the Orient Express, on Pocket paperbacks in the 1970s, which I talked about here.

But the real heyday of Poirot paperback visualizations seems to have been in the 1940s and 1950s, during the early years of the "paperback revolution," on softcover editions by Pan (UK) and Dell (US).  I think you could say that these were of varying success.  All the Poirots were consistent in key ways though--bald or balding (when hatless), mustachioed, generally Gallic looking.  (On the Pans he usually has a bow tie, which I think suits him.)

But Poirot wasn't the only Golden Age sleuth portrayed on book covers of course.  For example, when I was working on illustrations for Masters of the "Humdrum" Mystery, I was thrilled to find a book jacket front panel from the Twenties that had been preserved, which actually included a likeness of John Rhode's Dr. Priestley.  It suited him too!  I made sure to include it in the book. 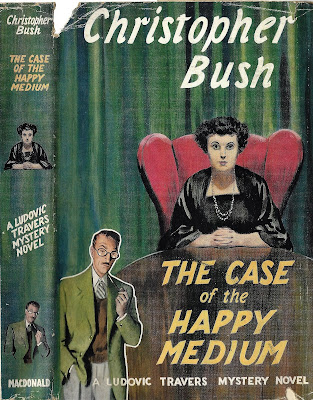 After the Second World War Christopher Bush's veteran sleuth Ludovic Travers maintained enough of  a following of his long-running series in the UK that his publishers decided that his fans might like to know what he looked like.  Certainly Bush described Ludo enough over the years: tall, lean, horn rimmed, and even somewhat hatchet-faced.

The first visual depiction of which I'm aware is on the cover of Bush's 1952 detective novel The Case of the Happy Medium (pictured right).  This image was used for a time on jackets and in the front matter of Bush's Travers mysteries, though not on front covers again, as far as I'm aware.

He's definitely not quite Travers as I imagine him, but he's certainly more mod, in keeping, to be sure, with the woman with the massive beehive-ish hairdo.  But the Fifties Travers on the covers of Colonel and Cross (especially Colonel) suits Bush's Travers to a "T." 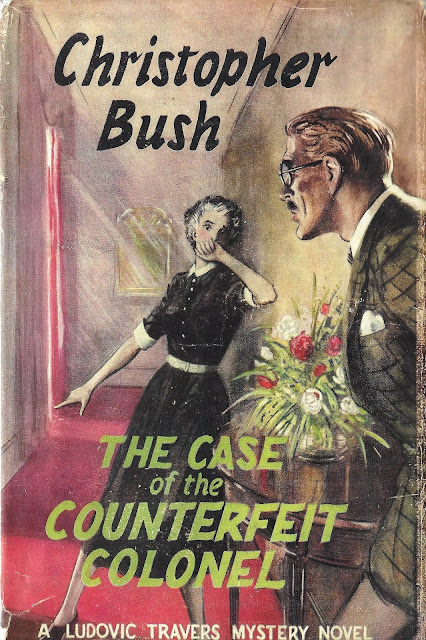 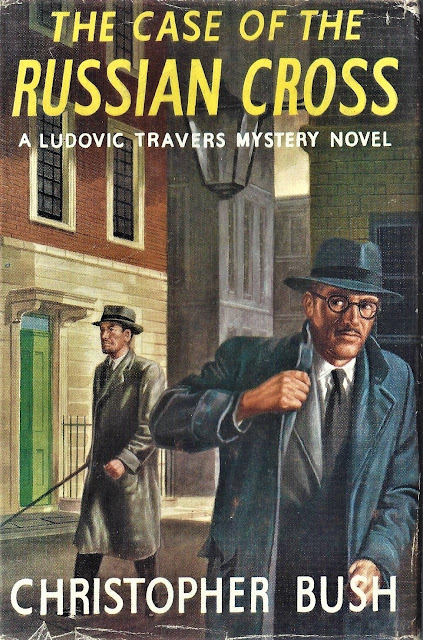 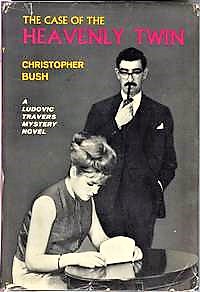 But let's not forget Travers' police pal, Superintendent George Wharton, who likes to set suspects at their ease as he beams down at them, avuncularly, his wire rim glasses sitting low on his nose--and then pounce!  Wharton may not appear on book jacket covers, as far as I'm aware, but in the books Christopher Bush helpfully pointed out the Yard superintendent's marked resemblance to two people, the real life American silent and talking film comedian Chester Conklin and the rotund musician in Punch artist George Belcher's painting "I Dreamt I Dwelt in Marble Halls," which exhibited as the Royal Academy in 1936, and was the Academy's award winner that year.  See here.

British television series makers, take note!  If you ever get tired of Christie adaptations that move ever farther away from Christie's texts, there's also Christopher Bush and the 63 cases of Ludo Travers.