HOW TO STOP HITLER
By Q. Patrick
Author of "S. S. Murder," "Death for Dear Clara," and many other mystery novels 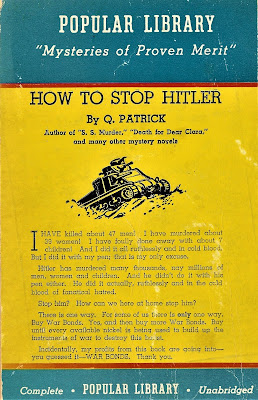 I have killed about 47 men!  I have murdered about 39 women!  I have foully done away with about 7 children!  And I did it all ruthlessly and in cold blood.  But I did it with my pen; that is my only excuse.

Hitler has murdered many thousands, nay millions of men, women and children.  And he didn't do it with his pen either.  He did it actually, ruthlessly and in the cold blood of fanatical hatred.

Stop him?  How can we here at home stop him?

There is one way.  For some of is, there is only one way.  Buy War Bonds.  And, yes, then buy more War Bonds.  buy until every available nickel is being used to build up the instruments of war to destroy this beast.

Incidentally, my profits from this book are going into--you guessed it--WAR BONDS.  Thank you.

Q. Patrick was, especially in his earlier writing, a rather bloodthirsty mystery writer.  Not for him one mere austere murder.  But his killings indeed were nothing compared to the real ones of the Second World War.

Q Patrick's patriotic appeal to Americans to buy War Bonds was published in 1943 on the back of the Popular Library edition of Q. Patrick's S. S. Murder.  Richard Webb, 41, and Hugh Wheeler, 30, the two native British authors behind Q. Patrick, became American citizens in January and April 1943, respectively, and were called to service in defense of their new country.

Hugh, who suffered from diplopia ("double vision"), was stationed with the Army Medical Corps at Fort Dix, New Jersey, while Rickie went the extra mile--actually he went thousands of extra miles.  In the Army Signal Corps he was stationed at Hollandia, New Guinea, where he contracted Japanese Encephalitis.  Rickie longed to return to the home fires, but sadly he would find, like many others of the returned, that those fires provided only dim comfort from the malaise and maladies of the postwar years.  Things would never be the same for him again after Hitler finally was stopped, and for that he blamed the war.
Posted by The Passing Tramp at 12:38 PM