Dean Street Press has a new tranche of Bushes--Christopher Bushes--out now, just in time for all those dreary (though necessary) quarantines and lock downs and what not.  These ten titles, beginning in 1952 and ending in 1957, are the cases of the Counterfeit Colonel, Burnt Bohemian, Silken Petticoat, Red Brunette, Three Lost Letters, Benevolent Bookie, Amateur Actor, Extra Man, Flowery Corpse and Russian Cross--the last of these, incidentally, being Bush's fiftieth, "Golden Jubilee" Ludovic Travers detective novel.

I shall be reviewing a few of these here soon, but in the meantime I wanted to pay tribute to the British Bush dust jackets of these years, when Ludo Travers became one of the best visualized of vintage crime fiction detectives.  Alan Hunter, author of the George Gently mysteries, at this time dubbed Ludo the "English Marlowe" (referencing Raymond Chandler's famed sleuth).

If Bush's novels are ever adapted as films, the filmmakers certainly will have a ready model for casting the lead, courtesy of these splendid Macdonald jackets from the Fifties.  What actor looks like Ludo to you?

The Case of the Silken Petticoat (1953)
Here Ludo is consigned to the role of an onlooker on the jacket spine as a mysterious brassy blonde confronts arrogant critic Clement Foorde at the Cafe Rond.  This is a truly superlative jacket which really captures the scene from the book:

It was almost half-past six and the bar was pretty full. There was plenty of chatter and so much of a smoke haze that I had to give my hornrims a polish before I could see clearly to the far end. Behind the bar, and against a long background of multi-coloured bottles, a cocktail-wallah and a couple of barmen were busy as beavers.

A fat man had slid off a stool and put on his hat, and I was on that one vacant bar stool before its temperature had sunk by half a degree and ordering a treble whiskey and soda.  Then I had  a good look to my right, and there was Clement Foorde. 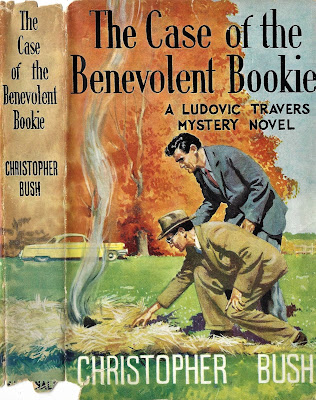 ....Had I leaned forward I could have stroked the voluminous cape or the silky head of swept-back white hair.  I could almost have counted each hair in the mustache and the little imperial that barely reached the bottom of his chin, and I could see every detail of the setting of the handsome antique ring that flashed as he gently waved a white, gesticulating hand.

He was in one of the deep leather chairs with a low table between him and his listener, a donnish-looking man whom I did not know....

The Case of the Benevolent Bookie (1955)In past cases lanky and bespectacled Ludo, who narrates his cases, often self-deprecatingly compared himself physically to a secretary bird.  This cover, depicting Ludo and a plainclothes policeman investigating a dead body found in a burned hayrick, brought the image of a secretary bird to  my mind. 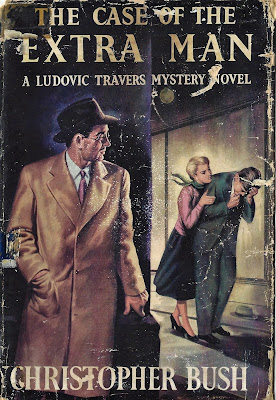 The Case of the Extra Man (1956)
Here Ludo really looks like a PI spying on a couple--including another blonde--from an alley.

The Case of the Russian Cross (1957)
Ludo trails a suave suspect who has just left his photography studio, with its exterior woodwork painted in turquoise blue and cream: "I saw the beautifully trimmed dark beard as he turned, and the smartly cut black overcoat and the dark Homburg hat."

The Case of the Running Man (1958)The titular running man appears on the cover, fleeing Ludo's presence in a high-end antique shop.

This novel will appear be reissued next year, with the dozen other remaining Bush Ludovic Travers titles. 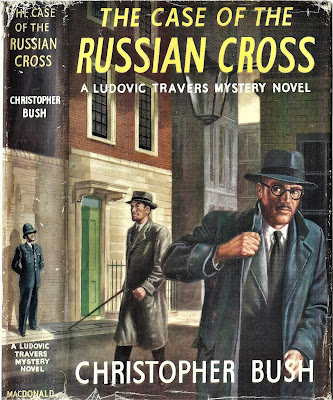 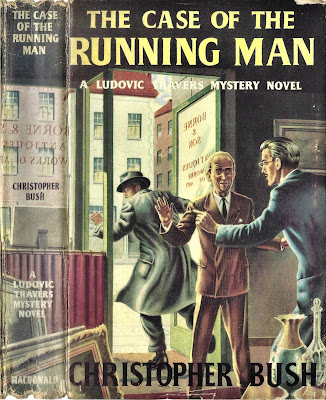 Posted by The Passing Tramp at 5:00 PM