But though [Inspector French] didn't know it, Fate, weighty with the issues of life and death, was even then knocking at his door.

I was to do a discussion of this novel with Jim Noy on his blog, but what with work deadlines, a terminally ill parent, pandemics and the like, it seems it just did not work out for us.  So I am posting a review separately.  Read on, if you wish....

The most popular mystery writer of the 1920s (by far) was not Agatha Christie but Edgar Wallace, King of the Shockers.  We hear a lot about the Golden Age of detective fiction between the two world wars--and it indeed it was such, and shiningly so--but this period was also the Golden Age of the classic thriller, as embodied by not only Wallace, but "Sapper," Sax Rohmer, John Buchan, Patricia Wentworth and a host of other writers.

With the huge popularity of the thriller, it's no surprise that writers more commonly associated with classic detective fiction got in on the lucrative game as well.  There were, for example, Christie, of course, with her excessively jolly dogooders Tommy and Tuppence, Margery Allingham, with her debut Albert Campion novel, The Crime at Black Dudley (1929), and Freeman Wills Crofts, who during the Twenties published three mystery novels in the thriller form (of nine from that decade): The Pit-Prop Syndicate (1922), Inspector French and the Cheyne Mystery (1926) and The Box Office Murders (1929).

For my money, the best of this trio is easily the latter title, The Box Office Murders, published in the United States under the less apt but far more lurid title The Purple Sickle Murders.  The Pit Prop Syndicate, with its soppy heroine moaning over and over to her beloved, like a wilting Victorian miss, that their love "cannot be," and The Cheyne Mystery, with its dunderhead hero of whom Inspector French and the the author seem quite unaccountably fond, are not nearly Crofts' strongest books in my opinion; but The Box Office Murders is a different packet of thrills altogether, or so it seems to me.  (Plus there is detection.)

Who is killing cinema box office cashiers, all young women, in London?  (Remember when we used to go to movie theaters?)

It is up to intrepid Inspector French to find the clues that lead to a infamously diabolical criminal conspiracy.  "As he picked up the [telephone] receiver," Crofts begins the novel weightily, "[Inspector French] little thought that that simple action was to be his introduction to a drama of terrible and dastardly crime, indeed one of the most terrible and dastardly crimes with which he had ever had to do."

That pregnant phone call introduces French to one Thurza Darke (You won't forget that name!): a distressed cinema box office cashier who believes that nefarious criminals have murdered her friend Eileen Tucker, a supposed suicide by drowning, and are now after her too.  Like Thurza, Eileen was a box office cashier.  Thurza believes that crooks had been trying separately to inveigle both young women into some sort of criminal scheme involving the cinemas, by means of pulling them into bottomless pits of rigged gambling and resulting debt.

As I discuss in my book Masters of the Humdrum Mystery (2012), Crofts had an obsession with the evils of gambling.  Its perils crop up over and over in his books.  "How many times had just such a little drama been enacted, and how many times it would again," Crofts intones sententiously in The Box Office Murders.  "Probably since before the dawn of history  gambling had been used to get fools of the human race into the power of knaves."  I don't know that cavemen were rolling dice (bones maybe), but this does seem to have been a highly personal indeed to Crofts, who takes on his most solemn and biblical of cadences as a writer when addressing it.

Just what sort of scheme the crooks are up to, however, is unclear, and this becomes the major part of the mystery French has to clear up.  His job is made harder when the terrified Thurza is found dead--another supposed suicide by drowning! 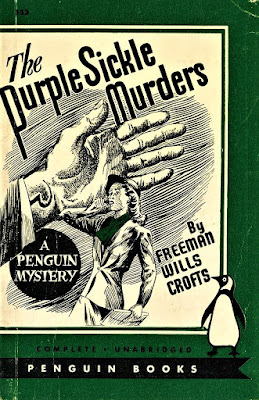 Through her friend Eileen, Thurza, however, was able to identify the lead crook as a man with a lividly purple, sickle-shaped scar on his wrist (giving rise to the American title of the novel).  Crofts ends the first chapter of the novel with these dramatic lines:

"And then," repeated Miss Darke excitedly and with an unconscious dramatic effort, "then he raised his arm and I saw his wrist.  Mr. French, it had a purple scar like a sickle on the inside!"

Is anyone else reminded of, "Mr. Holmes, they were the footprints of a gigantic hound!"  Crofts may have cribbed this from the Master, but it's still highly dramatic, I would say!

Another of the "evildoers," as Crofts calls them (recalling former American president George W. Bush) is the gang's "procurer," if you will, the tellingly named Gwen Lestrange.  She's described as "a big girl, tall and broad and strong looking," with "a square face" and "a big jaw."  Obviously a wicked adventuress who has, like Shakespeare's Lady Macbeth, unsexed herself with her wickedness.

This is an uncommonly sober novel, even for Crofts.  The concept of "sex" in reference to the young women is referred to directly (rare for Crofts, one of the most upright of authors) and one of the villains calls someone a bitch, although a long dash is primly used in place of the actual word.  Further, when Thurza is killed, French grows "hot with rage against the people whose selfish interests had led to the snuffing out of this young life."  Still, Crofts finds yet another menaced box office cashier, one Molly Moran, and puts her in peril of her life to try to nail the killers.  Will Molly meet the same fate as her predecessors?

French remains cavalier about police ethics (oxymoron?) in this novel.  He jokes with a chief constable about hoodwinking a coroner's court, for example, and he still uses his trusty "bent wire" to try illegally to break into places to conduct searches.  "By hook or by crook he would examine the car," French thinks at one point, "even if he had to commit a felony."

French is very determined indeed to put an end to evildoing.  When he wants to search a velvet side pocket of the car, however, he finds himself longing in vain "for the skill of Dr. Thorndyke to secure microscopic dust from its fibres...."  With all due respect to the brilliance of the fictional Dr. Thorndyke, wouldn't Scotland Yard have had a technical expert to do this?  Maybe that's a reason why French shouldn't always be breaking into things and, well, violating the law with his illegal searches and seizures.

This aspect gives French, for all his surface niceness, a ruthless quality that television adapters have picked up on, even as they have dispensed with French's motherly body of wife, Em.  In this book, as in others, Em sits and knits near her husband, when he's at home, "full of a tender maternal feeling for this great child in whom all her life was centered."  Blech!  Spare a little bit of your life for yourself, Em.

At these happy times by the domestic hearth, Em gets what she calls "notions" (if she were a man Crofts would call them ideas); and, no doubt about it, Em has a good notion indeed in this novel, one which makes you wonder why she isn't in the police force rather than her husband.  Yet the highly traditional Emily French would be a tough sell in a modern television adaptation, with all her placid knitting and matronly mothering.  Molly Moran is more like it now, spunky with a "stubborn little chin" (not mannish Gwen Lestrange's objectionable "big jaw")--though she's required to behave like a complete nitwit later in the book, in classic thriller fashion to be sure.  Still Molly would play admirably well on television. 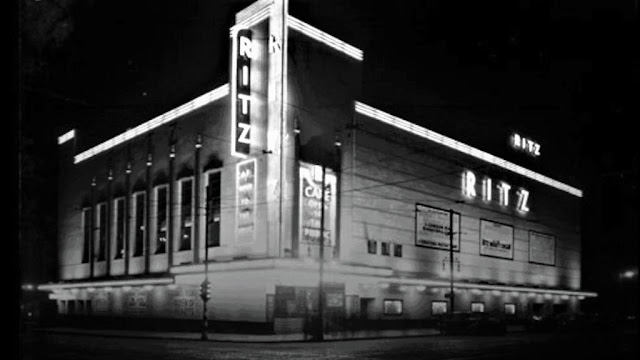 I can also imagine how well those old movie palaces would show up on film.  Crofts captures a bit of that glamour when he writes that the "facade of the Cosmopolitan blazed with the coruscations of flaming lights as [French and Sergeants Carter and Harvey) ascended the marble steps to its doors."

Crofts' most arresting writing for me, however, is always when he takes on that old time biblical cadence.  It may sound hokey to some but for me Crofts' absolute sincerity carries it through.  Crofts was not a great writer (his fondness for cliches is on full display here), but he had great moral conviction which continues to impress with its sheer authenticity.  He also created one--and only one--great archetypal character in Inspector French.

Crofts can surprise you with his acute observations sometimes.  when French is looking for other menaced box office cashiers, he reflects that

There was no use in asking the mangers of the various London cinemas whether any of the girls under their charge had lately displayed signs of hidden anxiety.  So long as their work was done, the managers would neither know or care.

That's quite  statement on employer-employee relations, circa 1929!

Back to what I call the biblical writing style of Crofts, let me close by offering a couple of examples.
"From such slight threads are the webs of justice woven" is one such line.  There is also the highly moralistic closing paragraph of the book, when we learn that

As for French, the consciousness of work well (if slowly) done was its own reward...he had at least the satisfaction of knowing that he had....cleared out a nest of evildoers whose removal was essential to the welfare of the entire country.

How satisfying such a happy (if hard won) resolution, where justice wins out in the end, must have been to readers who were heading into the 1930s, a decade of constant uncertainty and frequent terror.  Perhaps hindsight tells us that The Box Office Murders will afford similar comfort to readers today, nine decades later, as they plunge into the 2020s, which are already off to rather a perilous start.  After all, hindsight is 2020.
Posted by The Passing Tramp at 7:10 PM