With Malice Toward All: A Simple Case of Ill Will (1964), by Evelyn Berckman

I have an article coming out next week at CrimeReads, in which I look at poison pen letters in fact and fiction.  One factual case which I found rather mordantly amusing (happily no suicides were involved) occurred in 1934 in the small town of Vermilion, Ohio (located west of Cleveland on Lake Erie).  Perhaps there are people alive today who recall it.  Two of the main combatants in the affair, Mrs. Zenobia Krapp and Mrs. Marvell Snyder, proved remarkably long-lived, dying respectively in 1984 and 2000 at the ages of 91 and 104.  Enmity dies hard.

Over several months in 1934 members of the Vermilion chapter of Sorosis--a national women's literary and social club originally and ironically founded in New York in 1868 to promote among women "mental activity and pleasant social intercourse"--had been inundated with what newspapers termed "vile and obscene letters," the contents of which "cannot be be decently repeated."

Handwriting experts pointed the finger of guilt at no less than the President of the Club, one Zenobia Krapp, who as a result was promptly expelled from its ranks.  Mrs. Krapp thereupon went to court (it's the American way), filing a $10,000 defamation lawsuit against eleven of her former Club members.  Undaunted, Marvell Snyder, the newly installed president, affirmed her belief that the culprit behind the letters was indeed the former president, elaborating thusly: "Mrs. Krapp plays the piano.  There are several other members of the Club who play it too, and in the opinion of some people they can play better than Mrs. Krapp.  That's what's back of the whole thing."

What might be termed the unpleasantness at the Sorosis Club made national newspaper headlines in the United States, although this poison pen affair, unlike most others, was treated rather mirthfully by the press.  Despite its humorous manifestations (including the fact that the putative villainess in the affair was named, well, Zenobia Krapp), the Vermilion poison pen case beautifully illustrates how intense rivalries and feuds among women in uncomfortably close proximity could produce unexpectedly bitter jealousies and animosities. 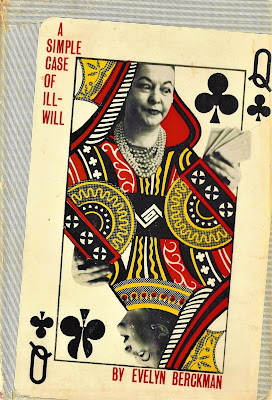 This fact is illustrated as well--very well--in fiction, in author Evelyn Berckman's tenth crime novel, A Simple Case of Ill Will (1964).

Berckman was once a highly regarded suspense novelist who today has largely fallen out of the public eye.  Formerly a promising composer and concert pianist, Berckman published her first crime novel in 1954, at the age of 53, simply to assure herself of an adequate income in middle age.  She produced well-reviewed nine crime novels between 1954 and 1962.  Between 1964 and 1977 she published an additional seventeen novels, but these are more of a mixed lot, some being classic crime novels, some not so classic crime novels and others not crime novels at all.

I reviewed one of the good crime novels, The Victorian Album (1973), seven years ago.  Since then, works by her have been highly favorably reviewed by additional bloggers.  (One of them called my review "cheerfully fulsome," something I don't recall my writing ever being called before....)

Many of Berckman's novels are set in England, where Berckman herself migrated (she was originally from Philadelphia), and they have more than a touch of distinctly English disquiet, like a serving of tea and cakes where arsenic has been surreptitiously added to the menu.

Like The Victorian Album (1973), A Simple Case of Ill Will is one of the good Berckman crime novels.  The American edition of Will, published by Dodd, Mead, copied the British edition on the front cover but on the back produced, in its entirety, crime writer and reviewer Julian Symons' rave notice of the novel in the Sunday Times.  (Despite this rave, Symons oddly neglects to mention Berckman, as was the case with so many women suspense writers, in his genre survey Bloody Murder.)

Symons' review is indeed worth quoting in full:

Uncommon Wit And Style
A Simple Case of Ill Will, by Evelyn Berckman

There are few more likely settings for crime than a bridge club, and the club at which Armina Clere is a hostess is full of characteristic small greeds, fears and enmities.  Tottering, wheezing Lady Mellish and her niece Evadne whose subterranean rebellious fires never quite break out; the club's anxious owner Phyllis Dalton; its distinctly sinister servant, Arthur; and Armina herself, daughter of a Dean and now come down in the world to the point where the sum of her ambition is to be given a bedroom on the club premises-Miss Berckman shuffles them together and asks us to spot which of them is activated by some more powerful motive than common malice.

Why was there a strong smell of gas in a gasless basement, who tried to push Armina under a lorry, who is going to die and how?  The atmosphere of the bridge club is touched off perfectly.  Miss Berckman really takes trouble about the way in which her book is written.  Wit and style in crime stories must not go unmentioned.

This is a fine short review, which gives an apt summary of the plot of the novel, while also emphasizing its ample stylistic merits.  In my own case, I am once again reminded of the late Ruth Rendell, an crime author who had just commenced her writing career when Berckman's Ill Will appeared.  The tone of subtle menace is apparent from the novel's first sentence, in the way the second part of the sentence undercuts the first: "Hatred was a stranger to Miss Armina Clere, in the usual course of things."  What follows, of course, is not the usual course of things....

Armina Clere, the Dean's daughter, is another in that long line, in English crime fiction, of precariously positioned aging English spinsters (to indulge in that antiquated word).  What is reminded somewhat of Dorothy Bowers' Fear and Miss Betony, recently reviewed here.  In Ill Will, Miss Clere has to make a living as a hostess at a bridge club in a lovely old Victorian row house in London, a lone survivor, in the vicinity, of the Blitz and commercial development which followed after the war.  She covets moving from her dismal, distant flatlet to a storage room in the house, which would convert, in her eyes, into a lovely little bedsit.  This her great ambition in life, as the author poignantly captures:

She thought of the small dark room that hemmed her in with her few possessions, she thought of its gas fire and the greedy meter that gulped the shillings; she thought of the unheated house that contained it, its dank halls, its icy lav and chilly bathroom with its unconvincing hot water....It was all part of the deterioration that was taking place within her from the abrasions of worry and poverty, of making do with a small wage, a microscopic income and the scanty old-age pension.  She knew herself to be a person of good-nature and goodwill whom these pressures were turning into a woman of ill-nature and ill-will....

To what extremes of their own will ill-willed people in extremis turn? Miss Clere is the protagonist and point-of-view character of the novel, and we are intensely drawn to following her fate; but there are other interesting characters as well at the deadly bridge club, including

choleric Lady Mellish, the owner of the house and devoted patron of the club

Ellen, the young woman who helps Arthur serve the patrons ("staff, very minor staff, yet no staff was minor these days")

The tone is predominantly feminine, but most wickedly so--malice domestic at its best, as it were.  I think it's true that Berckman lost interest in plot over the years (like other crime writers, she had an urge to write "novels," if you know what I mean), but here the plotting is intricate and devious, while the writing and characterization is as much as devotees of the crime novel could ask.  This is a splendid mystery story, richly deserving of a reissue.
Posted by The Passing Tramp at 1:50 PM