Christmas Drear: The Inn Closes at Christmas/He Dared Not Look Behind (1947), by Cledwyn Hughes

...those that passed my front window knew nothing of what was going on behind the cozy lighted greenness, knew nothing.  Soon the streets would be empty.  It would be late.  But it did not matter.  I had the whole night in which to kill her.

Why must we assume that there is a God part in every soul?  Does not Satan have his little hold, his little plot, too? 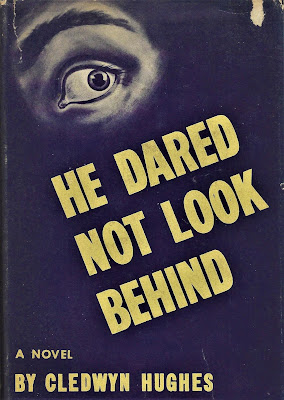 This is definitely a Christmas crime novel, but it certainly won't leave you full of Christmas cheer!  It's grim indeed.

Actually I should say Christmas crime novella, because by my count the tale is about 35,000 words long.  In the United Kingdom it was published with another short work of fiction by the author, Welshman John Cledwyn Hughes (1920-1978), but in the United States it appeared as a standalone novel, under the title He Dared Not Look Behind.  (Behind what, you ask?  Behind him of course!  Alternatively the book could have been titled He Dared Not Look Over His Shoulder, but I suppose that's a bit clunky.)

The American title of the book makes clearer its association with the crime/horror genre, yet the original British title is rather brilliant, for a reason I cannot explain here.

Cledwyn Hughes, as the author was known, was a promising young writer of but twenty-six years of age when he wrote The Inn Closes at Christmas, a novel which makes prominent use of his background as a qualified hospital pharmacist.  It's about a dentist in Wales whose mind deteriorates after he and his wife are in a car accident, as a result of which his wife has to have one of her legs amputated and replaced with an artificial limb.  The dentist finds said limb ever more repugnant by the day and finally he concludes that he must remove his wife from this earthly life in order to get rid of her artificial leg for good.  (The protagonists in the works of Edgar Allan Poe and Stephen King no doubt would have approved.)

To carry out his mad intention the dentist devises an ingenious murder plan, reminiscent of something out of Francis Iles' bump-off-your-wife opuses Malice Aforethought and Before the Fact, but you know what they say about the best-laid plans of mice and murderers....

This is a very dark tale indeed, with a particularly impressive final page, which illuminates why the book has the title it does (in the British edition).  I don't really have too much more to say about the book, as I don't want to spoil the story and also because it's such a lean and economically narrated exercise in psychological horror.  It's a book I think should be reprinted, although I recommend it for those who like their Christmas cocoa on the bitter side....

I could see critics saying that the story is either too short or too long, but some of us will find it just right.  In the United States, where as I mentioned it was published as a short standalone novel, Inn was placed in a notice in the New York Times Book Review with William Irish's (aka Cornell Woolrich) Waltz into Darkness and another book under the headline "Three New Shockers."  The reviewer praised Hughes' "limpid Welsh-English prose," concluding that the author's macabre "sonata is twice as effective because of its rigorous underplaying."

Posted by The Passing Tramp at 1:47 AM