Sucking in the Seventies 1: Catherine Aird's A Late Phoenix (1970)

A dangerous title, as the rock group the Rolling Stones must have known when they used it for their 1981 compilation album.  A lot of critics at the time suggested that it was in the Seventies that the Rolling Stones' remarkable musical output started to decline.  (The harshest critics argued that it began  to "suck.")  However, I'm definitely using the title, in reference to detective fiction in the vintage mold that was published during the seventies, in the sense of retrospectively assessing it, taking it all in, as it were.  How was classic-style mystery fiction from that decade?  Had it declined from the lustrous pre-war standard of the Golden Age?  We are now a half-century from the year 1970, just as in 1970 they were a half-century from 1920, the dawn of the Golden Age.  Certainly time to take a look. 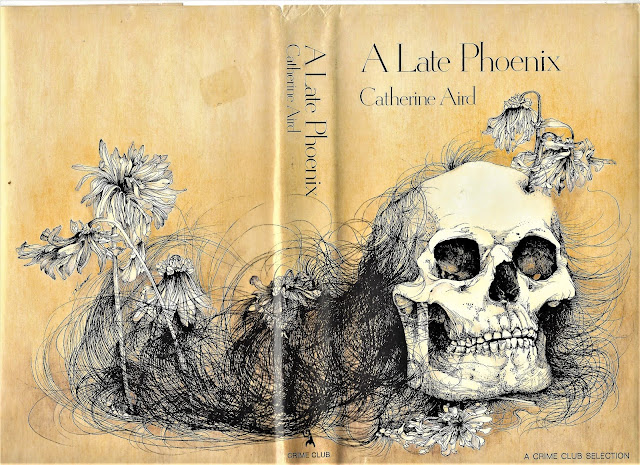 I'm starting, for no particular reason (not even alphabetical), with Catherine Aird's fifth detective novel, A Late Phoenix.  Aird had debuted four years earlier in 1966 with the well-reviewed The Religious Body and followed it with A Most Contagious Game, Henrietta Who? and The Complete Steel (published under the disappointingly literal title The Stately Home Murder in the United States), all of which were well-received as well.

American crime fiction reviewer Anthony Boucher, then terminally ill with cancer, lived long enough to review Aird's first two novels in the New York Times Book Review.  The first he praised in January 1967 in spite of some concerns he had about about its technical flaws. These concerns seem pretty damning in my eyes, yet after mentioning them Boucher sweeps them aside on account of the authenticity of the setting and charm of the author's writing:

One could easily object to Catherine Aird's first novel, The Religious Body.  The action sags badly in the middle, the ultimate explanation is quite unconvincing; and inadequate evidence is available to the reader.  But these are, really, fairly minor flaws in a genuinely attractive debut.  Miss Aird writes about a nunnery and its infinitely diverse nuns with far more insight and skill than the various mystery novelists...who have previously attempted it; and she does equally well by the Calleshire Constabulary.  We may hope that both Inspector Sloan and the Convent of St. Anselm may reappear soon--and with just a little more technical finesse.

It shows how far we had moved away from the high plotting standards of the High Golden Age when a detective novel received a good review from Anthony Boucher, dean of American mystery critics, in spite of an "ultimate explanation that is quite unconvincing" and "inadequate evidence" provided to the reader (i.e., a lack of fair play), all on account of some prettily portrayed cops and sisters. But The Religious Body provided the flavor of a vintage detective novel and even that was something in 1966.

Incidentally, classic mystery fan Patrick Ohl had similar reservations about the novel when he reviewed it six years ago, calling it a book of "tremendous promise" that "falls completely flat."  He's a priest now, so he has interesting perspective here.

Aird's second novel, A Most Contagious Game, wherein we are presented with both a modern murder and one in the distant past, was praised by Boucher as a "charming book" that should appeal to admirers' of Josephine Tey's much praised (and in my view over-praised) historical "true crime "mystery The Daughter of Time (1951).  (In the same review column Boucher noted that PD James' Unnatural Causes showed that she was "steadily improving" and coming "very close to the level of Patricia Moyes.")  He included Game, along with Moyes' Murder Fantastical and Emma Lathen's Murder against the Grain (though not James' Unnatural Causes) in his list of the thirteen best "thrillers" of 1967, the last such list he would live to compile.

Less than five months after the publication of his review of A Most Contagious Game, Anthony Boucher succumbed to lung cancer at the age of 56.  His successor at the NYTBR, Allen Hubin, reviewed Aird's third detective novel in three years, Henrietta Who?, less than three months after Boucher's death.  Hubin found this one "shrewdly plotted" with "entrancingly crisp" narration.  For my part, I think it is the best Aird I have read, even though the title sounds distressingly like the name of a character from Dr. Seuss' children's 1957 book How the Grinch Stole Christmas, first broadcast in the U. S. as an animated Christmas special a couple of years before Henrietta Who? was published.  Was Aird, evidently a mirthful sort of person, having her own little joke?

I enjoyed as well Aird's first two detective novels, which I read, along with Henrietta Who?, back in the 1990s (though I recognized some of the problems with the first one that others did). Aird's fourth book was spoiled for me by an absolute a'hole reviewer on Amazon who reveals the murderer (Be warned: I think the review is still there),  Later Airds I read never really grabbed me because, while they all had classic-style plots, they just struck me as too chatty and desultory, with too many "colorful" characters. Having read A Late Phoenix, I'm afraid that I find it shares the same qualities, making it a slog for me, despite the fact that it is a short book, probably under 60,000 words.

In theory I should have liked it.  The affair in it arises out of a construction crew's unearthing of a human skeleton buried on a vacant lot, left cleared almost three decades previously by a Nazi bomber.  The skeleton appears to go back to around 1941, the time that the house there was leveled.  Was the woman whose skeleton it is the victim of the bombing?  It is assumed so until it is discovered that a bullet is lodged in the skeleton.  Since the bones of a fetus are discovered as well with the skeleton, it may be that some man from long ago wanted to get an inconvenient pregnant woman out of the way.  (Everyone assumes that it must have been a man in the book,)  But what man?  When another death follows, of someone connected to the property in the days of the Second World War, it appears that a murderer is still around and active, willing to kill to prevent his dirty work at the crossroads to be exposed.

So far so good.  It's an interesting enough problem in theory, but my main problem is with the telling and the tone.  We get a hint of where things are going right off the bat, when we find that each chapter opens with a quotation from Mrs. Beeton's Cookery and Household Management, for no good reason that I can see.  Gladys Mitchell was probably the Queen of Utterly Irrelevant Chapter Quotations in British Detective Novels, but Catherine Aird may have run her a close second in this regard.  Of course no one can beat Michael Innes for egregiously excessive literary quotations throughout the text any given book, but sometimes his do actually relate somehow to the story at hand.

Like Aird several of the characters in the book are given to "amusing" chitter-chatter, particularly Superintendent Leeyes and Dr. Dabbe.  Clever names--if Leeyes is meant to make us think of lees, or dregs, that certainly describes the irrelevancies so frequently uttered by this tiresome character.  Leeyes spends the book in his office looking out of his window at "Dick's Dive" across the street and complaining about the androgynous looking men (looking rather like Mick Jagger probably) coming in and out of the place.  I was thinking maybe this would actually have something to do with the plot, but alas not.

If you like this kind of thing, there's certainly a lot of it to like here.  Personally it makes me miss the austere Humdrums of yore like Freeman Crofts and John Street, who don't go in for it and just get on with the investigation.  Happily, Aird's Inspector Sloan is very much in the classic British copper mode and he's fine.  I can even take Sergeant Crosby, whose dimness and enthusiasm for driving offers yet more comic relief.  But when there's too much comic relief, what is to relieve us from the comic relief? It seems especially jarring in a story about a murdered pregnant woman.  But no one in the novel ever sheds any tears over the victim and her unborn child, so why should we?

The suspects in the case, on the other hand, are a drab lot, whom I could hardly keep apart in my mind.  When the revelation came of which one "done it," I honestly couldn't have cared less.  I was just flipping through the last thirty pages to get to the end.  In A Catalogue of Crime, Barzun and Taylor called this book "featureless and humdrum" and they are right (though Allen Hubin liked it).  Outside of a charming chapter where Sloan and his wife Margaret reminisce about being children during World Two (like the author), I really did not enjoy reading A Late Phoenix.

Aird has some stylistic oddities as a writer that really get on my nerves as a reader, like these sort of hanging adverbs:

And she loves single short sentences for emphasis.

You know these sentences.

And this, from the book:

Perhaps Dyson was right to take refuge in flippancy.

There was nothing pretty about Dyson's job.

Photographing the aftermath of human folly.

Maybe Aird should have written a mystery in free verse and gotten it out of her system once and for all.

More interesting than the book she actually wrote.

Sorry for the negativity.

I have another review of a Seventies mystery coming up soon.

Gives us hope for the new year.

Posted by The Passing Tramp at 2:36 PM