The Reality of Surbiton and Bognor Regis: Look Alive (1949), by Miles Burton

I doubt that [Dashiell] Hammett had any deliberate artistic aims whatever; he was trying to make a living by writing something he had firsthand information about.  He made some of it up; all writers do; but it had a basis in fact; it was made up out of real things.  The only reality the English detection writers knew was the conversational accent of Surbiton and Bognor Regis.  If they wrote about dukes and Venetian vases, they knew no more about them of their own experience than the well-heeled Hollywood character knows about the French Modernists that hang in his Bel-Air chateau....Hammett took murder out of the Venetian vase and dropped it into the alley....He wrote at first (and almost to the end) for people with a sharp, aggressive attitude to life.  they were not afraid of the seamy side of things; they lived there.  Violence did not dismay them; it was right down their street.

The name Surbiton conjures up visions of a neat London suburb with nice cars and smart lawns, the epitome of suburbia, that 1930s creation still existing in a time warp today, but there is much more than to Surbition.  The name Surbiton does not derive, as many people think, from suburb but from "south bereton."  The estate of Kingston had two beretons or granges where grain was collected and stored.  This north and south beretons became Norbiton and Surbiton....

The great change came upon Surbiton with the coming of the railway in 1838....Surbiton thrived as a commuter town [to London] with a great expanse of housing being built in the 1920s and 1930s....

Hard-boiled novelist and perpetually grumpy guy Raymond Chandler had no truck for England's Detection Club, which he apparently deemed a collection of narrowminded suburban bourgeois authors putting on airs and devoting themselves to mythologizing murder in aristocratic milieus about which they knew no more from their own personal experience than any of the rest of us.  Of course as John Dickson Carr, one of the rare American members of the Detection Club, pointed out, there actually were members of the Detection Club who came from aristocratic and genteel backgrounds.  One of those was Carr's best friend in the Detection Club in those days, Major Cecil John Charles Street, whose maternal grandfather, while not titled, was nevertheless a very wealthy landed, leisured gentleman.  Although Street was a career army man and a trained engineer, rest certain that he knew the Jane Austen types too.

Chandler published his essay "The Simple Art of Murder," which included the dismissal quoted above of English detective novelists who knew only of the conversational accent of Surbiton and Bognor Regis, as the title piece in his 1950 collection of short works, after its having made its original appearance in The Atlantic Montly in 1944.  Upon its publication in 1950, John Dickson Carr promptly attacked the essay, along with the rest of Chandler's work, in a scathing New York Times review, infuriating Chandler, who denounced Carr and his friend Anthony Boucher, The Times' crime fiction reviewer, as "pip-squeaks" who had conspired against him.  (Admittedly, Boucher's handing off the job to Carr was rather like asking Rachel Maddow to review the latest thoughtful opus from Sean Hannity.)  "There is nothing wrong with Surbiton or Bognor Regis, unless Mr. Chandler's soul holds much snobbery," chided Carr, in one of his milder statements.

It appears as well that John Street got in a sly little dig at Chandler, in his 1949 novel "Miles Burton" detective novel Look Alive. (Good title, that.)  Coincidentally this was the last Miles Burton novel to be published in the United States, although Street's John Rhode novels would keep appearing in the country until 1961, after which Street, whose health was declining, retired from writing.  (He died three years later.)  This point hadn't occurred to me nine years ago, when I published my book on Street, Freeman Wills Crofts and J. J. Connington, Masters of the Humdrum Mystery, but it seems obvious to me now.

For the novel is set explicitly set in Surbiton!  Indeed, it says so right there in the first line:

"The car, a rakish-looking two-seater of uncertain age, drew up outside the house in Surbiton."

Given that John Street very rarely named his settings after real places (besides obvious ones, like, well,  London), I think Street was having his little joke here.  I can just imagine Street and his drinking buddy Carr snarking about that bloody wanker Chandler in 1947 (Carr left England for the United states in early 1948.)  The joke goes further when you see how everyday the central characters really are in the novel.  This really is, one imagines, the conversational accent of Surbiton in all its glorious banality.

Like in other Street books there is some complicated family history involved, but what it boils down to is that there is this "girl" in her early twenties, Annabel, and her parents, Irene and Henry Dorset. who live placidly if rather dully in Surbiton, Henry Dorset going two or three times a week to the City, where he vaguely serves as a "director of a firm of merchants."  He's also an amateur yachtsman.

Then there is Claire Lavant, an octogenarian retired stage actress who was the second wife of Irene Dorset's late uncle, who resides at The Brake, a walled country house on the outskirts of Surbiton in Fernbrake Forest.  Claire inherited half of the Lavant family money from her dead husband, and at her death this money will go to Irene Dorset (or, if Irene is dead, to Annabel), her step-grandson, Roy Rayner, having died a couple of years previously in a criminal smuggling operation.  (Roy was one of those distressed WWII vets having a hard time readjusting to civilian life, who were popular in fiction at the time.)  But Claire Lavant is estranged from the Dorsets--in fact Henry Dorset despises her, going on and on about how she is depriving them of the family fortune.  He's rally rather obsessed with it all.

Annabel, who seems to have even less in her life to do than her father, is kinda-sorta involved with David Wiston, a young doctor.  People think she will marry him at some point, but she can't help feeling that he is just kind of, well, wet.  ("It seemed to Annabel that David was proving a broken reed," is one of my favorite deadpan lines in the novel.  How true, though Annabel herself is no picnic.)

When the story opens Annabel and David are taking a country drive, which carries them out to Fernbrake Forest and The Brake.  Coincidentally?  Annabel wonders if David has done this by design, but she is persuaded to drop by The Brake to call on her great-aunt, or more properly step great-aunt.

Perhaps she will get a friendly reception?  Well, not exactly....

Upon entering the grounds of The Brake, Annabel and David are shocked to discover the old lady dead in her hammock in the garden, vainly bedecked in baubles and bangles!  Then when they return with David's father, a more experienced doctor, they find the "dead" old lady alive and talking to the press about her stage career!

Was David that dim that he couldn't accurately diagnose a dead woman, or is something more sinister going on?  Soon that snoopy-nosed gentleman Desmond Merrion, who had been butting into people's business for nearly two decades at that point, is on the scene, by invitation of his old friend from naval intelligence, Henry Dorset.  After he finds something rather nasty--not in the woodshed but in the boathouse--he gets his old police acquittance, Inspector Arnold, in on the game too.

It's a most complicated affair,to be sure, involving as well Claire Lavant's old friend and neighbor Sir Julius Blackrock, a retired theatrical agent who resides at a neighboring walled house, The Retreat.  (So, yes, a knight makes his way into the story.)  Then there are the various servitors at the houses, including an individual whom the jacket of the American edition describes as "the sullenly handsome young gatekeeper," who definitely carries an earthy whiff of Lady Chatterley's Lover.*

(I'm convinced at this point that Street must have read that novel.)

In the London Observer reviewer Maurice Richardson gave Look Alive a strong appraisal, writing: "Nothing, in this department, is more gratifying than to find one of our sturdiest old-stagers improving on his form....Inspector Arnold and Desmond Merrion smoke out a nest of variegated fiends in Mr. Burton's best for several books."  Was Look Alive indeed Burton's best in several books?  Well, let's see.  Here are the previous ten Miles Burtons:

My favorites in this group are The Three Corpse Trick, Not a Leg to Stand On, The Cat Jumps, Situation Vacant and Heir to Lucifer, so, yes, that would make Look Alive Burton's best in about five books.  (I have a certain fondness as well for Death Takes the Living, but the mystery itself is certainly no great puzzler.  Death in Shallow Water and Early Morning Murder, on the other hand, are dire.)

In Look Alive Street dexterously juggles several different plot orbs and ingeniously spins a most satisfying mystery.  You may feel you know some of what is going on, to be sure, but it's hard to fit everything together, at least it was for me.  It seems like Street's most algebraic plot since The Three Corpse Trick.

There's even a locked room problem, or rather a locked boathouse problem, a rarity in Street's oeuvre, and some nice little alibi bits thrown in too.

It's really rather impressive, in its formal British way, Raymond Chandler be damned.  However, a map of The Brake and The Retreat really is desperately needed, as well as a family tree.  Superior people sneer at those things, which smack of "mere puzzles," but if you are going to write this sort of mystery, I say go the extra mile, my good man!

The fact that this perfectly good English mystery of the classic puzzler variety was the last Miles Burton published in the States (much to the misery of modern collectors, who have to hunt down rare Collins Crime Club editions of the Fifties Burtons), suggests to me the waning of the popularity of the pure puzzle type of mystery, at least among reviewers and publishers.

The review of the novel in the New York Times, cleverly titled "The Wealth of Levant," is suggestive in this regard.  "This is a book for zealous puzzle fans who don't really want their pure guessing game cluttered with such irrelevancies as a lively story or sympathetic characters," drolly pronounced reviewer Hillis Mills (a man, in case you were wondering).  Mills complained that  Desmond Merrion "is so unattractively cocksure that the reader could almost wish the villain would outwit him" and Annabel he dismissed as a "confused busybody of a girl," but he concluded that the book offered a "fine, intricate puzzle."

That seems to have been good enough for Hillis Mills, and it's certainly good enough for me, even if it wasn't good enough for Miles Burton's American publisher, the Doubelday, Doran Crime Club.  In my next blog post I think I will post some additional American reviews of the novel to give you the climate of the day in regard to classic mystery.

Also, judging from the photos below, Surbiton looks like it would have been cool place in the Thirties, conversational accent notwithstanding.  Of course, Raymond Chandler lived in La Jolla, California, which he didn't like either.  That man was hard to please. 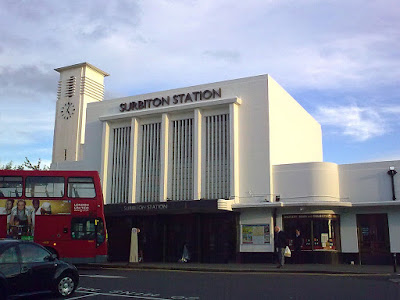 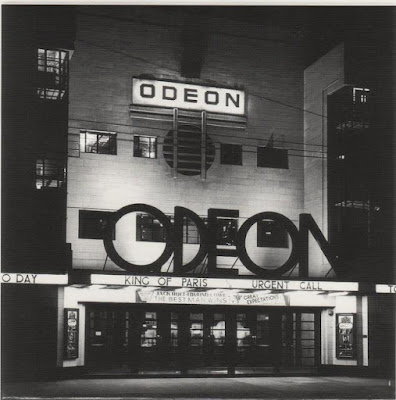