When I rediscovered classic mystery in the 1990s, when I was in graduate school pursuing a degree in history, I also discovered that public libraries still carried a lot of old mysteries going back to the Sixties and even Fifties.  I remember even finding a copy of John Rhode's detective novel Three Cousins Die, for example, which I believe dates to 1958 or 59.  Not one of his good ones unfortunately!  In fact this was the title which inspired Julian Symons ironically to dub Rhode, with the recent passing of recent the slightly elder Freeman Wills Crofts, "our reigning master of the Humdrum Mystery," a passing shot which inspired the title of my 2012 book, Masters of the Humdrum Mystery, a salute to the "Humdrum" British mystery writers whom Symons influentially disparaged in writing for over three decades.

But the mystery writer I enjoyed whose books were especially prevalent in libraries then was a younger British writer, Elizabeth Ferrars, who, like her contemporary Christianna Brand, might be seen as a very late Golden Ager.  Ferrars preceded Brand into print with her first detective novel by one year, in 1940, and mysteries by her appeared practically every year for the next five decades, until 1995--a 55 year span which rivalled that of Agatha Christie (1920 to 1976).  Had Ferrars not suddenly expired in 1995 at the age of 87, there's every reason to believe that she would have keep going with her writing, perhaps even into the 21st century--in the last Ferrars books there's no sense of the steep mental slippage that is evident in the last two novels Christie wrote, Elephants Can Remember and Postern of Fate.  I believe Ferrars published a total of 71 crime novels, outpacing Agatha Christie by five.  (At the beginning of her career she also published two mainstream novels; Christie wrote six of these herself, including the brilliant Absent in the Spring, meaning their total output would be even, at 72 apiece.)

Her longevity in and of itself makes Ferrars interesting, as she straddled the Golden and Silver ages of detective fiction and even what we might call the Bronze Age.  When Ferrars died in 1995, PD James and Ruth Rendell were well into their reigns as Britain's premier Crime Queens, Val McDermid had just published her CWA Gold Dagger winning novel, The Mermaids Singing, and Ian Rankin was on his seventh Inspector Rebus novel.  (He would win the Gold Dagger for the eighth in 1997.) Where the ingenious Christiana Brand, who maintained a devoted following among fans of classic mystery, essentially flamed out after 1955, after the publication of Tour de Force, her seventh detective novel in 14 years (though she did manage another one in 1979), Ferrars kept on going, like the Energizer bunny, waving a revolver and a blunt instrument in his paws.

But Ferrars' work is remarkable not simply for being prolific but, like Brand's, for its content as well.  Over the decades her writing illustrates, to a considerable extent, the changes going on in British crime fiction.  She is an important though underappreciated figure within the history of the genre.

Her first five mysteries, published  between1940 and 1942, are written with fidelity to Golden Age norms, then still prevalent, although under attack on all sides, especially in the United States.  Hence we have a sort of amateur gentleman detective figure, Toby Dyke (good name for that sort of 'tec) and his working class sidekick, George, reminiscent of Margery Allingham's Lugg and Dorothy L. Sayers' Bunter, except in that George actually solves the cases--a subversive touch that!  The writing is good, though the author doesn't allow herself to delve too deeply into the characters, who are primarily pieces in a puzzle.  Three of the novels in this series are excellent, in my opinion.  One of them I have reviewed here way back in 2013 and I plan to review my other favorites soon.

However, when a new Ferrars detective novel appeared in 1945, after a lapse of three years, Toby and George had gone, never to return.  In fact Ferrars dispensed with amateur series detectives entirely until much later in her life, publishing instead a long succession of standalone mysteries, beginning with I, Said the Fly in 1945.  This title, along with Murder among Friends (1946) and With Murder in Mind (1948), are not my favorites in her output, but they are significant books for being precursors of the modern crime novel, where there's a great focus on "regular people" (in practice this means white, college educated professional types) impacted by murder.  There's a lot of talking in these books--too much of it to my mind.  With Murder in Mind actually is the novelization of a patient discussing a murder case with her analyst--an interesting idea in theory, but rather a tedious slog in practice.  Yet you can sense the author straining  to produce something newer and "realer" in crime fiction, something more like the conventional novel.

By 1950, Ferrars finally hit upon her forte with Milk of Human Kindness: the domestic murder mystery, set among the professional middle class in provincial locales not far from London.  (Both I, Said the Fly and Murder among Friends had taken place in wartime London.)  It took her a few years for her really to hit her stride, but when she did she never looked back.  One Fifties crime fiction critic referred to these books as "country cottage" mysteries, distinguishing them from the country house mysteries of the Golden Age.  Here you tend not have stuffy gentry and comic servants and great mansions and weekend house parties and stolen jewels and bodies bludgeoned in libraries, but college-educated, middle-class commuter professionals, modernized cottages and bungalows, and grumbling women from the village who come in once week to clean.

From this time until around 1980 Ferrars' crime fiction held in place stylistically, while accommodating changing social mores.  (Seventeen years younger, Ferrars adapted a bit better than Christie to Sixties/Seventies sex, drugs and rock and roll.)  With the introduction of the Virginia and Felix Freer series in 1978 and, especially, the Andrew Basnett series in 1983 (the latter of which has been reprinted in charming editions by Felony & Mayhem), Ferrars' mysteries began to show signs of cozification.  There were 16 of these series mysteries published between 1978 and 1994 and only 10 non-series mysteries in the same period (plus one posthumously published one in 1995). But all of them are pretty comfy.

Ferrars' best mysteries, in my estimation those which appeared from roughly 1954 to 1982, typically have clever, clued murder plots with credible characters and settings.  The Lying Voices comes from the beginning of this period.  Ferrars later recalled to writer Douglas Greene that John Dickson Carr after reading this novel in 1954 told Ferrars later that year that "he had come to the conclusion that I could solve anything." 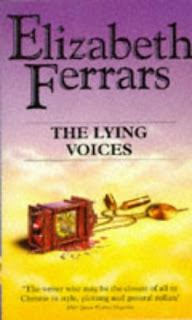 The Lying Voices of the title are clocks, and any Agatha Christie fan should immediately find something striking a chime in this passage, where the author describes the room where the novel's first corpse is discovered:

….the room contained at least one hundred clocks....

The clocks ticked in a hundred rhythms, loudly or softly, on high or low notes, some striking the hours sweetly and some with a jangle and some letting them pass without comment of any kind.  But one thing all the clocks had in common.  Every single one in that room, big or little, shabby or splendid, grotesque or beautiful, was wrong.

Yes, Christie swiped this murder mise en scene for her Hercule Poirot novel The Clocks nearly a decade later in 1963.  Or at least it would sure seem that she did.  I have to say that, although I like The Clocks more than most people I've found, I think Ferrars did a better job of actually incorporating this time element into the mystery.

The Lying Voices details how Justin Emery, returned to England from six years living in Australia, stops at the market town of Archersfield to call upon his old friend Grace DeLong out at her country cottage in the nearby village of Fallow Corner ("A grey stone house with a blue door outlined in pale yellow with pale yellow window frames"), where soon finds himself plunged into the murder investigation of Grace's friend Arnold Thaine, a high end furniture designer and clock collector.  When Arnold is found shot dead the very day of Justin's arrival, suspects in his murder include his assistants Ben Eagan and Lewis Brillhart, his attractive younger wife, Hester, and Grace herself, who clearly is hiding something--or perhaps a multitude of somethings.  As Justin himself admits, "Grace was a very irritating woman."

I could say more about the plot but I really don't feel inclined to.  I was pleasantly flummoxed and I enjoyed seeing the clues that I had missed which led to the truth.  I found the characters credible and I particularly enjoyed the ambiguity in the relationship between Justin and Grace.  Are they going to end up together at the end of the novel or not?  Could Grace actually be the murderer?  We are a long way off here from those dewy innocents, the young lovers in Patricia Wentworth novels!  By all means look up and read The Lying Voices for yourself (though watch out for careless internet plot descriptions which thoughtlessly give away too much about the plot and will surely spoil your enjoyment of the novel).  As one contemporary reviewer wrote of Voices, there's "plenty of psychology and painstaking clue-work," which should please vintage mystery fans of different stripes.

Posted by The Passing Tramp at 2:38 PM