Deathblow Hill was Phoebe Atwood Taylor's (henceforward PAT) seventh detective novel, and the first of them, I believe, to be narrated in the third person, which would remain PAT's narrative voice in the Asey Mayo series from then on.  (I think all of the previous books in the series had been narrated by a series of matronly lady sidekicks--Watsonettes, if you will--of Asey's.)

I sometimes have read that the earlier books in the Asey Mayo series are "darker," and I have always thought, to be honest, you've got to be kidding me.  Well, Deathblow Hill, while not exactly dark, is the first book in the series where I could kind of see what people were getting at with the dark talk.  It's a long way off from Cornell Woolrich, say, but it's also much more restrained than the Forties Aseys, when everyone in Cape Cod, headed by Asey's Cousin Syl's wife, Jennie Mayo, seemed to be having a lovely, madcap war indeed.  It seems that as Jennie became more prominent in the series, the zanier it became.  Or maybe it was just the influence of PAT's Alice Tilton series, which is tres zanee to be sure, very definitely mystery of the genus screwball. 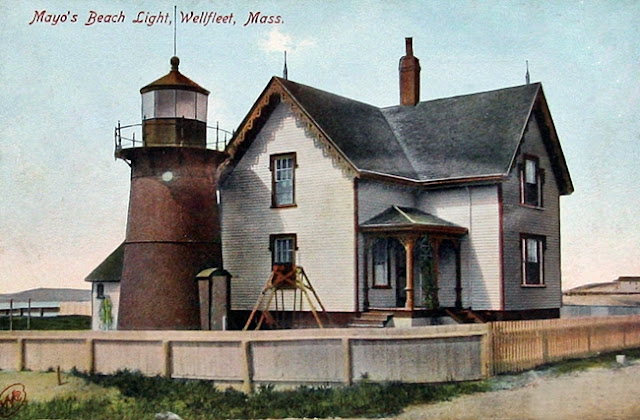 Anyway, Deathblow Hill actually does have some dark threads in the crazy quilt.  In the first few pages PAT not only provides some lovely scene painting of Cape Cod's Weesit Harbor in June, she sets up some genuine conflict between two rival family factions, all of them relations of wealthy old sea trader Captain Bellamy Howes.

On the one side we have Suzanne Howes and her son Lance, Suzanne being the fifty-something widow, for the last twenty-six years, of Bellamy Howes' adopted son Eben.  Her son Lance was born after his father's death, so he must be about twenty-six himself, like the author herself at the time.

On the other side there are Abby, Captain Bellamy's daughter, and her husband Simon Keith.  Their two houses are in sight of each other up on Deathblow Hill (indeed the Keiths, a spiritually unprepossessing pair, frequently spy on the Howes with binoculars), but they are separated by a chain link fence topped with barbed wire, reflecting the bitter personal division between the two families, who have long been feuding over the missing money from the Captain Bellamy's estate.  The old man was said to have been worth over a million dollars (!) when he died, but all the lucre that was found in the bank amounted to merely some $40,000.  That's a big discrepancy, it is.

Suzanne and Lance live at the old Howes Homestead, which comes complete with an abandoned lighthouse, while the Keiths reside in the "gingerbread, fretwork and colored glass monstrosity" that Captain Bellamy built for himself when he struck it rich.  (Ever notice how many Golden Age mystery writers, American and British alike, hated Victorian architecture?)

These are all well-drawn characters, and you can actually feel some of the acrimony which runs among them.  It helps that, among his many other ill qualities, Simon Keith is more or less a peeping Tom and  rapist in waiting who lusts hungrily after Suzanne, whose "shape's  better than it was thirty years ago," as he puts it to his disgusted wife Abby as he spies on her with his binoculars.

Another good character in the novel is Jerusha Sekells, nicknamed Broody Mary "because they say I never see nothin' but the dark side of things," who comes in the summer to help with the boarders whom Suzanne takes in to try and make ends meet.  Speaking of boarders there's Tabitha Newell, another one of PAT's indomitable Boston matron types, whom PAT always does to a turn.  (A little earlier in the series "Tab" likely would have been the novel's narrator.)  And there's Joan House, a plucky and pretty young Boston secretary to a rather dodgy New York business tycoon named Benjamin Carson, who's there to provide the novel with some of that old LI (love interest).  All these young women in PAT's books, I've noticed, seem to embody aspects of PAT herself, who briefly tried the old secretary racket herself after graduating from college, before turning her hand to writing.

Yes, Tab and Joan are boarders at the Howes house--they even get, as I recollect, coveted rooms in the lighthouse itself.  And, oh yes, Tab's nephew pops up at the old Howes place too; he glories in the name of Levering Newell and is another good character.

Of course there's murder done at Deathblow Hill, and it's all part of a tangled affair indeed, but I thought it was pretty nicely untangled.  There's at least one whopping coincidence,  to be sure, but you just have to realize that in PAT's Cape Cod, everyone is going to be related somehow.  My Mom's home town in Pennsylvania was the same way, actually.

And, sure enough, you will find that PAT drew on her own family genealogy for this book.  Her father's father, Joshua Nickerson Taylor, was a sea captain who sailed all around the world, finally expiring in Orleans, Cape Cod, attended by his physician son, PAT's Dad, at the age of eighty-seven in 1928, when his granddaughter PAT was a nineteen-year old college sophomore. His first voyage had been nearly seventy years earlier in 1850, when he was eight years old (nearly nine).  He served as the cook aboard the schooner Pennsylvania, on its voyage to harvest cod off the Grand Banks of Newfoundland.

So much for PAT's father's side of the family.  On her mother's side, PAT's grandfather, Ebenezer Tilton Atwood, was a fourth cousin of William Newcomb Atwood, who, like Joshua Nickerson Taylor, had gone to sea on ship as a boy, serving as the ship cook.

Unlike Taylor, Atwood lost an arm in the Civil War, at the Battle of Fredericksburg.  He returned home to Wellfleet, unemployable in his former vocation, married Sarah Cleverly--now there's a good surname--and in 1865 was appointed keeper at--drum roll, please--Mayo's Beach Lighthouse at Wellfleet.

Now I think we know where Pat's keen sleuth Asey got his Mayo.  Asey's home town is, after all, Wellfleet.

William Atwood died in 1876 at the age of fifty-five and his forty-year-old widow Sarah, who now had to raise the couple's four young children alone, was appointed his successor.  She served for fifteen years until 1891 and passed away at Wellfleet in 1920, when PAT was about ten years old.  You won't persuade me that the genealogy-obsessed PAT didn't know all this stuff about her maternal grandfather's fourth cousin's family.  I imagine the Atwood domicile at Mayo's Beach with its lighthouse was the genesis of the main house in Deathblow Hill.

The lighthouse at Mayo's Beach was decommissioned two years after Sarah's death and it finally ended up in Point Montara, California, where it remains today.  The modest Victorian house where the Atwood family lived, sans lighthouse, is still there at the same spot in Wellfleet--where it's now valued at 2.6 million dollars!  I mean they added a garage and indoor bathrooms, but still....

It's sobering to think that few of the rustic native Cape Codders in PAT's books could actually afford to own a home there today.  Well, Asey probably could, as the series develops he's revealed as sort of a universal genius (same thing happened with Sherlock Holmes); but I have doubts about poor Syl and Jennie!