Killing Cousins: A Review of Blood Relations: The Selected Letters of Ellery Queen, 1947-1950

Writers of biographies and/or critical studies know what a thrill it is to discover caches of personal letters written by one's subjects.  The dead people about whom one writes sometimes can become almost as real as living ones.  In Blood Relations: The Selected Letters of Ellery Queen, 1947-1950, Joseph Goodrich has reproduced some fascinating material: a group of letters--culled from the Frederic Dannay Papers in the archives at Columbia University--exchanged over a four year period between Frederic Dannay and Manfred B. Lee, the two cousins once well-known to the world as the mystery writer "Ellery Queen." 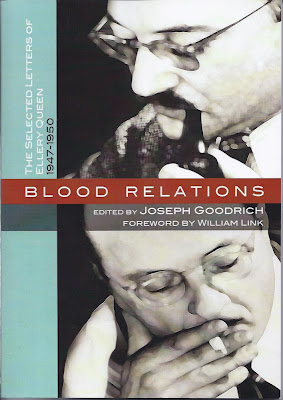 Ellery Queen arguably is the greatest American exponent of the classical (puzzle-oriented) detective novel that we associate with the Golden Age of detective fiction (c 1920-1940).  Without a doubt Queen also is one of the great figures in the entire history of the mystery genre.

In addition to producing some of the most acclaimed works in the classical tradition--novels such as The Greek Coffin Mystery, The Tragedy of X, Calamity Town, Ten Days' Wonder, and Cat of Many Tails, for example, and the novella "The Lamp of God"--Ellery Queen also was, through Frederic Dannay, of huge significance in the genre.

As an "editor, anthologist, collector and critic" Dannay was hugely important in his own right.  His "four decades at the helm of Ellery Queen's Mystery Magazine would be enough to insure his immortality in mystery publishing," Joseph Goodrich rightly avows.

I have to commend Perfect Crime Books, the publisher of Blood Relations, for printing a collection of letters by an author who, despite his undeniable importance to the mystery genre, is currently mostly out of print and sadly short shrifted by academic scholars in modern studies of the genre (three EQ novels currently are available in print on demand format from Langtail Press and Crippen & Landru offers two fine collections of shorter EQ works, The Tragedy of Errors, 1999, and The Adventure of the Murdered Moths and Other Radio Mysteries, 2005).

Although admittedly Blood Relations is of special interest to those who have read works by Ellery Queen, there nevertheless is to be found within its pages fascinating detail about the views of the two cousins, Dannay and Lee, on the mystery genre in general; and I wholeheartedly recommend the book to all lovers of Golden Age mystery.  Let us hope more reprints of the EQ books soon follow. 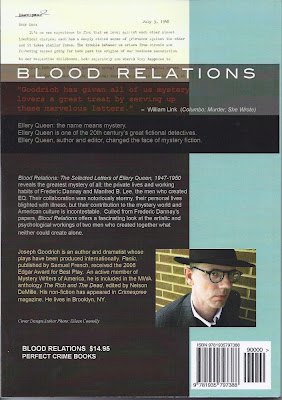 After a charming forward by William Link, producer of the television detective series Columbo, Ellery Queen and Murder, She Wrote (and author of The Columbo Collection, a short story volume published by Crippen & Landru), Goodrich provides an introduction explaining the historical significance of Ellery Queen and the nature of the interest of the published correspondence between the two cousins.  First, the letters highlight a highly contentious, even "vitriolic" (to use William Link's word) working relationship between the two passionately opinionated cousins.  People who think authors of "mere puzzles" are hacks who do not feel deeply about their work should think again after reading these letters. Second, the missives give great insight into the thinking about the mystery genre by two of its great men.

Dannay plotted the books and came up with the characters while Lee fleshed everything out in prose. Dannay was the one with the puzzle brain, Lee the one with the grand ambition to be, as Goodrich puts it, "the 20th Century's Shakespeare."

"That [Lee[ failed to do this," continues Goodrich, "is no shame, but the gap between desire and achievement" was a "source of torment" for Lee.  Lee's son Rand, notes Goodrich, admitted that his father "was one of the unhappiest men" that he had ever known.  Where Dannay believed that the detective novel could be raised to the level of literature, Lee had his doubts. Lee was, writes Goodrich, "far less interested in the form per se, and conflicted about expending his literary energies on something critics like Edmund Wilson held in contempt.  As good as he was at it, he didn't like what he was doing."

By the 1940s both men wanted to move beyond their glittering puzzles of the thirties (the brilliant succession of four-word nationality mysteries--The French Powder Mystery, The Greek Coffin Mystery, The American Gun Mystery, The Spanish Cape Mystery, etc.--and the "Barnaby Ross" Tragedy series), with their fiendish problems and flimsy characters, toward something more resembling mainstream literature.  In 1942 they produced Calamity Town, a more naturalistic work with greater character and setting interest.

During the time of the correspondence Goodrich has collected, Dannay and Lee were working on two of the mysteries commonly regarded as among their greatest, Ten Days' Wonder and Cat of Many Tails, as well The Origin of Evil.  The heated arguments the cousins got into over the composition of these books are fascinating.

Dannay insisted to Lee that with these books he was "trying to get away from material clues and positive, ultra-logical deductions." But Lee still tended to find situations in them false and artificial, and he let Dannay know this in no uncertain terms. He identified something that I have felt is true of the Ellery Queen books in general: even the ostensibly naturalistic ones are not all that naturalistic; most of them have implausible, anti-realistic elements imposed on them by the puzzle structure (I would say this is true to some degree even of Calamity Town).

Lee wrote a particularly thoughtful and incisive letter to Dannay on January 23, 1950 highlighting this "problem":

As I see it, what trouble exists between us on this question of fantasy in plot stems from our opposing points of view....I have a drive toward "realism"--conformity to the facts and color of life and the world as we live in it--in story; you have a drive to a sort of "superman" psychology in plot, in which vastness and boldness of conception is nearly everything--the colossal idea, planned to stagger if not bowl over the reader....While recognizing, even applauding all this, I still look at the result and I must say, "But how fantastic.  Who would--could--do such a thing?  Nobody human.  It doesn't ring true to life in exactly the proportion in which it is brilliantly conceived.  The more brilliant, the less convincing.  Yet I have to write the story in terms of people, in recognizable "realistic" background.

Dannay retorted that there "is more realism in good fantasy than in bad realism"--a point I would have loved to see him develop in the correspondence.  As it is I can sympathize with what Lee must have felt when he was presented with books like The Origin of Evil and The Glass Village.  The latter book, for example, is meant to be a savage satire of 1950s American McCarthyism, yet it is continually undermined, in my view, by its wildly unrealistic aspects. Trying to make all the plot points plausible must have been a real strain for Lee.  This is why I on the whole prefer the EQ books from the thirties, which are unashamedly artificial.  If the situation in The Siamese Twin Mystery, say, is contrived, so what?  It's not aiming at realism.  These 1930s tales are some of the most splendid examples of Golden Age Baroque in existence.


Both Dannay and Lee found an example of "bad realism" in the 1949 serialized version of hard-boiled master Raymond Chandler's novel The Little Sister.  The comments by both cousins concerning Chandler's work are strikingly splenetic (in their defense I should note that Cosmopolitan, the magazine that serialized The Little Sister, has just turned down the highly regarded EQ serial killer novel Cat of Many Tails, a book the cousins had figuratively sweated blood over in composing).

Of the Little Sister serialization a baffled and demoralized Dannay begged Lee:

Please read the Raymond Chandler story in the current issue of Cosmo and tell me how in the name of all that's reasonable, [Herbert] Mayes could buy the Chandler shit and reject the cat story? How? How?

Lee responded with another extraordinary missive, one that demands to be read in full.  It's an amazing jeremiad against what Lee derisively terms the "slick" school, with its

"Recognize facts," Lee lectured thunderingly of the slick magazines.  "They want shit, they are shit, and it takes a shit expert to satisfy them."


The supreme irony here is that "The Simple Art of Murder" (1944), Raymond Chandler's famous (or infamous) attack on the traditional puzzle detective novel (the sort Ellery Queen produced in the 1930s), surely was motivated to some extent by Chandler's own resentment over his novels and stories not being serialized in the highly remunerative slicks up to that time.  Now in the late 1940s Chandler's stuff was on the inside track and the EQ cousins feared that they were the ones being pushed to the outside.  That all Chandler's fictional works are in print and selling well while Ellery Queen books have faded shows Dannay and Lee were right to be concerned.

Modern critical opinion tends to see Raymond Chandler as a legitimate "serious" novelist, someone who raised the detective novel to the level of "literature," while dismissing Ellery Queen as a gimmicky purveyor of mere puzzles.  But anyone who does not believe that the cousins who comprised Ellery Queen were major creative artists in their own right, men who put a terrific amount of thought and labor as well as consummate skill into the composition of their mysteries, should read Blood Relations and learn something.  "Ellery Queen is the Forgotten Man of the mystery world," laments Goodrich in his conclusion.  While there actually are numerous undeservedly forgotten men (and women) from the Golden Age of the detective novel, certainly Ellery Queen is at the very top of the list of mystery writers who merit revival.
Posted by The Passing Tramp at 2:45 AM