The Art of Murder: Murder in Stained Glass (1939), by Margaret Armstrong 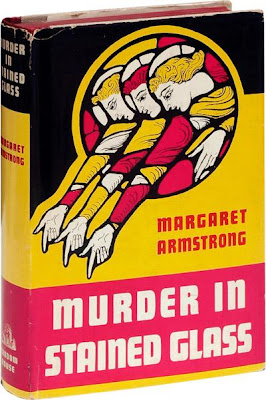 Murder in Stained Glass is the first and best of Margaret Armstrong's trio of crime novels.  It is also the only one of them that we know was read by Agatha Christie.  One imagines that Christie enjoyed the tale, for it is in fact a very worthy enrollee in the Mary Roberts Rinehart school of crime fiction. 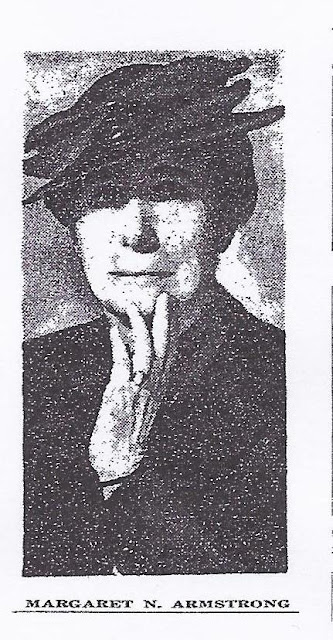 Although Howard Haycraft classified Margaret Armstrong as an HIBK (Had I But Known) writer, in truth of Armstrong's three genre efforts only Murder in Stained Glass conforms to the HIBK pattern.  We have

an opening premonitory passage (quoted above)

narration by a Rinehart-ish wealthy, outspoken "spinster"--this one, Miss Harriet Trumbull, actually shy of fifty--who determines to meddle in a murder investigation

Yet pleasingly the novel emphasizes detection over the inducement of shudders and shivers in the reader.

Often in the HIBK tales that I have read, the spinster investigator does not really ratiocinate. To the contrary, she remains rather clueless and mystified throughout the tale, waiting for a man ultimately to solve the case.  More, I think, than any sexism of which they have been accused, this aspect of HIBK stories is what provoked the ire of such prominent male critics of HIBK as Ogden Nash and Jacques Barzun.  Certainly, only detect! could be Jacques Barzun's criminous aesthetic motto.

Happily In Murder in Stained Glass, lead character Miss Trumbull with vigor and keenness investigates the murder that occurs while she is visiting her old school chum in rural New England; and she indeed gets much of the solution right (though she is stymied by the author's double twist ending).

The murder that Miss Trumbull is investigating is that of Mr. Ullathorne, the noted stained glass artist, who recently has left New York City and set up shop in rural Bassett's Bridge, home of Charlotte Blair, the aforementioned old school chum of Miss Trumbull.  In the novel there is interesting detail about stained glass manufacture, with which the author was quite familiar, her father and a sister being noted American stained glass artists.  (see Margaret Armstrong: HIBK Patrician )


Indeed, Margaret Armstrong's's original title for Murder in Stained Glass was Red Flash, a technical term for a type of stained glass.  However this title was vetoed by her publisher, Random House, which feared that Red Flash would lead mystery readers to think that Armstrong's first murder tale was actually a dog story!

As Miss Trumbull notes at the beginning of the novel, she almost turned down her friend Charlotte's invitation to visit.  "Poor Charlotte" (as Miss Trumbull usually thinks of her) has always been tiresomely nervy and her home, in contrast with the stylish Miss Trumbull's stylish Park Avenue apartment, is a "rather gloomy" place, "one of those Greek Revival mansions our great-grandfathers admired; tall white pillars in front and tall dark spruces gathering too close all around" (this mansion sounds a lot like Margaret Armstrong's own ancestral abode).


Nevertheless, Miss Trumbull feels duty-bound to visit her friend and, though she finds poor Charlotte nervier than ever, she is delighted with Charlotte's young cousin and ward, Phyllis Blair ("pretty and lively and slim...bright red hair, bright blue eyes and bright pink cheeks, not enough lipstick to matter and, thank the Lord, eyebrows"), and Phyllis' romantic interest, Leo, the son of and principal male model for Mr. Ullathorne ("a beautiful creature...figure of a young Greek athlete").


Leo Ullathorne is well-liked, but it is another story altogether with his Bohemian artist father.  When the latter man is found to have been murdered shortly after Miss Trumbull's arrival, there is no shortage of suspects in the village (and out of it).  "[W]hat with the [Ullathorne] funeral and all, the village is having a grand time," bluntly declares the Blair's homespun "right-hand man," Minnie Clater.  "Haven't enjoyed themselves so much since [President] McKinley was shot."

Miss Trumbull has a low estimation of Skinner, the man in charge of the murder investigation:

A man appeared in the doorway.  A short thickset man in a bright blue suit and bright yellow shoes, hat well on the back of his head, nose in the air, a bland smile creasing his broad red face.  It was Skinner, the detective....He smoothed an oily lock of hair back from his forehead with such complacence that I realized he considered himself alluring to the ladies....

Miss Trumbull is even less impressed with Skinner after he speaks:

"I got  a good brain all right....But it was luck gave me my first good case.  Arson....I got an old Polak in jail within six weeks."

"The jury thought so.  And he was an old crock better off in jail than anywheres else.  Well, that was the first feather in my cap.  Luck helped me in my next case too.  Dead baby in a well.  Didn't get a conviction that time though.  Fool girl killed herself.  But my step up came just the same, of course.

I nodded.  But I had reached the limit of endurance.

Though she finds the man insufferable, Miss Trumbull is able to take advantage of his male vanity, mildly vamping him to find out what she wants to know.

Wealthy, determined and single, Miss Trumbull decides to investigate the case on her own, in New England, New York and even Beaufort, South Carolina.  The novel's Beaufort section, where Miss Trumbull takes up residence at a genteel boarding house run by a couple spinster sisters, I found particularly appealing.  The author captures this bygone time and place quite well.


Incidentally, since I am sure you are wondering, here is the menu of boarding house meals consumed by Miss Trumbull while in Beaufort (hope you like grits!):

In Beaufort Miss Trumbull makes a major breakthrough in the case and soon she is back in New York City, putting her life at risk in a confrontation with the killer.  Fortunately when confronted with extreme peril the resourceful woman is handy with a teapot:

"I didn't suppose any lady could aim as good as that."

All in all, Murder in Stained Glass is a grand murder story, with a fair-sized dollop of feminism in it.  Not altogether surprising from the hand of a woman who seems to have resembled her character Miss Harriet Trumbull in notable ways.  It is to be regretted that this is Miss Trumbull's sole recorded venture in crime detection.

Posted by The Passing Tramp at 3:46 PM