Detections and Tribulations: Short Stories by Dashiell Hammett and Bill Pronzini (Then and Now #2)

I got out one of the issues of Black Mask I keep in desk drawer to pass idle time, but I couldn't concentrate on the Frederick Nebel story I tried to read.  I put the pulp away and lit another cigarette.

"It's a Lousy World," Bill Pronzini's original Nameless Detective short story, was published in Alfred Hitchcock's Mystery Magazine in 1968, thirty-five years after the appearance in The Black Mask of Dashiell Hammett's first Continental Op short story, "Arson Plus."  Unlike Hammett, whose entire body of Op detective stories appeared in a relatively short creative burst, the eight year period from 1923 through 1930, the Pronzini Nameless stories under consideration here were published over three decades.  It is fascinating to study the evolution of the hard-boiled detective story in the creative hands of Bill Pronzini, a writer adept at providing both human and puzzle interest in his work. 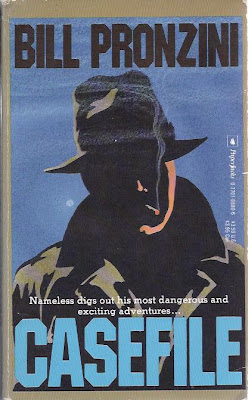 The two early Nameless tales, "It's a Lousy World" and "Death of a Nobody," both published before Pronzini was thirty years old, reflect the influence, I think, of Hammett but more particularly Raymond Chandler.  Consider the classic cadence of the writing:

Colly Babcock was shot to death on the night of September 9, in an alley between Twenty-ninth and Valley streets in the Glen Park District of San Francisco....I reed about it the following morning over coffee and undercooked eggs in a cafeteria on Taylor Street, a block and a half from  my office.  The story was on my inside page, concise and dispassionate; they teach that kind of objective writing in the journalism classes.  Just the cold facts.  A man dies, but he's nothing more than a statistic, a name in black type, a faceless nonentity to be considered and then forgotten along with your breakfast coffee.

He was drinking whiskey at the long bar, leaning his head on his arms and staring at the wall.  Two men in work clothes were drinking beer and eating sandwiches from lunch pails at the other end, and in the middle an old lady in a black shawl sipped red wine from a glass held with arthritic fingers.  I sat on a stool next to Tommy and said hello.

He turned his head slowly, his eyes moved upward.  His face was an anemic white, and his bald head shone with beaded perspiration.  He had trouble focusing his eyes; he swiped at them with the back of one veined hand.  He was pretty drunk.  And I was pretty sure I knew why.

--It's a Lousy World

His name was Nello....He was what sociologists call "an addictive drinker who has lost all semblance of faith in God, humanity or himself."  And what the average citizen dismisses unconcernedly as "a Skid Row wino.

--Death of a Nobody

In these two tales "Nameless" seems a morose, disconnected loner (he does have a cop friend named Eberhardt, however; a long-recurring character).  The bleakness is indicated by the change in title of the first story, "It's a Lousy World" (its title in Casefile).  In its original magazine appearance it is called, more hopefully, "Sometimes There is Justice."

In both tales, however, Nameless acts from a genuine sense of empathy to find the truth about downtrodden murder victims: his ex-con friend in "Lousy World" and a homeless wino in "Nobody."  Though I think it's a myth that the Continental Op never shows any sympathy for his fellow human beings in the Hammett stories, Pronzini feels closer to Chandler here.

Both are moving stories, with rather simple plots that feel like they could have come straight from the newspapers.  Something significant was to change in Pronzini's work, however.  The author himself writes about this change in his Casefile collection.

Pronzini, it seems, had determined to kill off Nameless in 1975, by giving the heavy smoker terminal lung cancer.  Once he changed his mind, making that lesion on Nameless' lung providentially non-malignant, Pronzini not only had Nameless give up smoking but also "change his outlook and...develop in a different direction," becoming "mellower" and "more cheerful" and showing "more of his sense of humor."  Also notably for Pronzini's readers, Nameless' cases became more "puzzling than his straightforward investigations during the pre-lesion period."

One sees this new style immediately in the 1978 story "The Pulp Connection" (published, appropriately, in Ellery Queen's Mystery Magazine).  Here is a story where Pronzini breaks with Chandler, who as we know from his "Simple Art of Murder" professed disdain for "gimmicky" plots.  Fortunately, I love them, so I appreciate this development in Mr. Pronzini's work!


Despite being associated with hard-boiled writing specidically, Bill Pronzini has a great love for and vast knowledge of the mystery genre in general, including works of classical detection ostensibly incompatible with the hard-boiled style (for evidence of this see his and Marcia Muller's 1001 Midnights and his Gun in Cheek and its sequel Son of Gun in Cheek).  In "The Pulp Connection," Pronzini has Nameless confront both a locked room problem and a dying message!

"He's dead--murdered."
....
"He was found here by his niece shortly before one o'clock.  In a locked room."
"Locked room?"
"Something the matter with your hearing today?...Yes, a damned locked room."

Some hard-boiled fans wear it as a badge of honor that their favored mode of crime writing is "above" such things as locked rooms and dying messages, but I don't see why.  Surely it is no crime for any genre writer to be entertaining.  Dashiell Hammett himself wrote a story that has a locked room situation ("Mike, Alec, or Rufus") and one that is in effect a closed circle country house mystery (Night Shots).  "The Pulp Connection" fits right in with the spirit of those tales.


As do the Cats-Paw, an award-winning Pronzini tale, and Ace in the Hole, a little tour de force--both collected in the Crippen & Landru collection Spadework.  In the latter story Nameless functions as an armchair detective, in the manner of Baroness Orczy's Man in the Corner, solving a miracle problem ("locked doors, disappearing guns--screwball stuff") during a poker game. 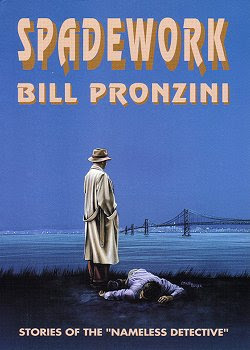 In the later tales, Pronzini also humanizes Nameless by letting him have sustained personal relationships, most importantly with his girlfriend, Kerry.  In "Twenty Miles from Paradise," Kerry is along for the ride when Nameless nimbly realizes appearances can deceive, and she helps provide an amusing (and somewhat racy) ending.

In another tale, "Here Comes Santa Claus," Kerry puts Nameless into a situation in which one could never imagine the Op, Spade or Marlowe getting inveigled, especially by a dame: acting as "Santa" at a Christmas party.  Detection is light in this one, but the story delights.


My two favorite Nameless short stories, "Skeleton Rattle Your Mouldy Leg" and "Worried Mother Job," represent the crime tale at its peak, combining genuine detection and fair play clueing with genuinely moving situations.  "Skeleton," built upon a Francois Villon poem, offers a powerful and memorable depiction of a depressing residence hotel for senior citizens and some of the most haunting closing lines I can recall in a short story, genre or otherwise.

Worried Mother Job for me recalls Ross Macdonald's favorite Hammett short story, Fly Paper, with its searing portrayal of dysfunctional family relationships (it recalls the work of Ross Macdonald too, for that matter).  It's another one you will remember--both for the anguished characters and the adept clueing.

Bill Pronzini's short stories honor both the hard-boiled tradition and that of the classical detective story--as, I would argue, do many of Dashiell Hammett's Continental Op tales.  While he frequently offers  readers clever and teasing problems Pronzini does not neglect the human dimension either.  While Pronzini tales like "Pulp" "Cat's-Paw" and "Ace" are pure puzzles, in stories like "Skeleton" and "Job," murder is very real--and it really hurts. The great Hammett-Chandler-Macdonald storytelling tradition is done ample justice by Bill Pronzini.

For part one of this piece, which considers short stories by Dashiell Hammett, see http://thepassingtramp.blogspot.com/2012/02/detections-and-tribulations-short.html
Posted by The Passing Tramp at 12:11 AM