The Country House Murders of "Edgar Box": Death Before Bedtime (1953)

In part one of the piece on Gore Vidal's Edgar Box mysteries, originally published in the 1950s, I wrote about their origin as the joint brainchild of Gore Vidal and Victor Weybright (publisher of Signet paperbacks) and then went into some detail on the first one, Death in the Fifth Position, which is the most pronounced of the three in what might be termed outre subject matter (especially in the 1950s).  Although the last two Boxes, Death Before Bedtime (1953) and Death Likes It Hot (1954), both include coital couplings between Vidal's amateur detective, Peter Cutler Sargeant II, and lady friends of the moment, on the whole the sex element (certainly the gay sex element) is toned down somewhat and there is a more concentrated focus on detection.  While neither novel, particularly Bedtime,  has as memorable characters as those in Fifth Position's ballet company (who tend to dance away with the tale), both books are more successful than Fifth Position as true detective novels.  And both books admirably display the wickedly satirical writing that graced the first. Both are herewith recommended.  Bedtime is reviewed here, Hot in the last installment. 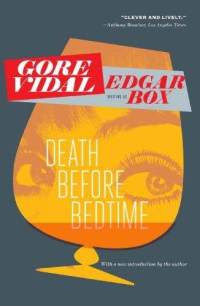 Death in the Fifth Position belongs to what surely is a tiny subgenre, the ballet mystery/thriller (as additional examples there's the three novels published from 1937-1940 by Caryl Brahms and S. J. Simon and Lucy Cores' Corpse de Ballet, 1944, available from Rue Morgue Press).  Death Before Bedtime and Death Likes it Hot, on the other hand, essentially are country house mysteries of the sort most commonly associated today with Agatha Christie, with a slightly hard-boiled twist.

Although it is the fashion today in many circles to disparage Agatha Christie and her novels, Vidal, like John Updike (see this earlier piece by me) admires Christie as a writer.  During an interview last year conducted between Gore Vidal and Stephen Heyman of the New York Times ("Gore Vidal, P. I."), the following exchange took place:

Heyman: Agatha Christie is a particularly strong influence in these books.
Vidal: In everybody's books.  Don't single me out.

Heyman: And there's also one passing reference to Holmes...
Vidal: I like Christie because I thought she was a great naturalist--those are real villages she writes about--and it's fascinating.  I used to like to read not for the mysteries but I read her for the characters.  They are of no use to an American writer, but anyway they are very nice to read.

Heyman: Edmund Wilson called detective stories a vice that "ranks somewhere between smoking and crossword puzzles."
Vidal: I don't think mystery stories are any lower than stories of how George and Emily failed to get status at the university or to English department politics.  That to me is about as tedious as it can get in print.

P. D. James, for example, has credited Dorothy L. Sayers with effectively portraying an English village in her 1930s detective novel The Nine Tailors, but contrarily she often has scoffed at the notion that anyone could find much to praise in the writing of Agatha Christie; so it was quite pleasing to me, as an admirer of such English village mystery tales by Christie as The Murder of Roger Ackroyd (1926), The Murder at the Vicarage (1930) and A Murder Is Announced (1950), to see a literary titan like Gore Vidal come to Christie's defense (the last of these Christie novels, incidentally, even includes a quite effective portrayal of a lesbian couple).

And Vidal says he read Christie "not for the mysteries," but "for the characters"!  Himself a brilliant satirist, Vidal appreciates that there in fact is fine satire in Christie's village mysteries.  What would journalists who have written so condescendingly of Christie's novels--such as Rachel Cooke ("hack-work") and Lindsay Duguid ("One can hardly bear to read on")--say of Gore on this score?  That this "upstart" doesn't know good writing when he sees it?

Christie's influence can be seen in both the Edgar Box books under review here (there is also a healthy splash of Christie's purported antithesis, Raymond Chandler).  Basically these two Box novels are 1950s American versions of the stylized closed-circle English house-party mysteries of the Golden Age of detective fiction (roughly 1920 to 1940), of which Christie today is the most renowned exemplar.

Death Before Bedtime takes place in the Washington, D.C. mansion of an unscrupulous, ultra-conservative Midwestern senator with presidential aspirations, Death Likes It Hot in the Hamptons "beach house" of a socially ambitious matron.  In both cases Vidal's amateur detective, publicist Peter Sargeant, is hired by the mansion owner to do a publicity job and thus is conveniently on hand when murder inevitably strikes (under the circumstances it's surprising the police don't come to suspect that Sargeant is a serial murderer).

Vidal himself today sounds rather like his famous grandfather on foreign affairs, though less like him on other matters.  He also appears to have idolized his grandfather.  In contrast, Vidal despised his egocentric, tipply and flighty (as he portrays her) mother, Nina Gore Vidal, who divorced his father and later, through her second marriage, ultimately became inter-connected with the Kennedy family (see Vidal's 1995 memoir).

This material is brought into Bedtime in rather an interesting way by Gore Vidal.  Leander Rhodes, the villainous Midwestern senator who is murdered in the novel (by explosives planted in his fireplace) would not appear really to be a portrait of Thomas P. Gore, but it sure seems to me that Senator Rhodes' dissipated daughter Ellen was inspired by Vidal's mother Nina.

Bedtime opens memorably with Ellen Rhodes and the always ready and willing Peter Sargent about to commence copulation on a D.C.-bound train:

"You know, I've never gone to bed with man on a train before," she said, taking off her blouse.
"Neither have I," I said, and I made sure that the door to the compartment was securely locked.
"What innocents we are," she sighed, then: "I wish I had a drink."

This gives you a pretty good idea of Ellen.

On the whole, it must be admitted, the characters in Bedtime are less interesting than those in Fifth Position, despite Vidal's own fascinating background among the country's political elite; yet Ellen Rhodes makes up for any deficiencies in this regard.

After Senator Rhodes is messily blown up in his own study, the guests in his home act as all guests should in a proper country house mystery, where death essentially is a game.

I was surprised at how calmly the guests took the sudden, extraordinary turn in their affairs...especially Ellen, who was the coolest of the lot.
"Do fix me a Scotch," she said....I sat beside Ellen on an uncomfortable love seat....
"This is awful," I said inadequately, conventionally.
"I should hope to hell it is," said Ellen, guzzling Scotch like a baby at its mother's breast.

Ellen quickly loses interest in Peter and begins pursuing another eligible young male, a virginal writer for an advanced leftist intellectual magazine that was doing an expose on Senator Rhodes when the Senator suddenly and violently expired.  Here is more frank repartee between Peter and the not-so-blushing Ellen:

"By the way, have you gotten into the Langdon boy yet?"
"What an ugly question!" she beamed; then she shook her head.  "I haven't had time.  Last night would have been unseemly...I mean after the murder.  This afternoon I was interrupted."
"I think he's much too innocent for the likes of you."
"Stop it...you don't know about these things.  He's rather tense, I'll admit, but they're much the best fun...the tense ones."
"What a bore I must have been."

Not for nothing is the cover of the Black Lizard edition of Bedtime illustrated by a woman's eyes looking out of a brandy snifter!  The fantastically uninhibited Ellen is something of a female version of Louis from Death in the Fifth Position.  Still, there is barbed humor directed at other subjects besides (I think) Vidal's mother.  Note this bit:

I found [Camilla] off by herself in a corner of the drawing room, studying the latest issue of Harper's Bazaar.  She was reading the thin ribbon of text which accompanies the advertisements; this thin ribbon was, I could see, the work of the latest young novelist: it concerned a young boy in Montgomery, Alabama, who killed nine flies in as many minutes on the eve of the Fourth of July...I had read it earlier, being of a literary turn (though I belong to the older literary generation of Carson McCullers and have never quite absorbed the newcomers even though they take mighty nice photographs).

Perhaps needless to say, another one of Gore Vidal's great dislikes (besides his mother), extending back over half a century now, is In Cold Blood author Truman Capote (1924-1984).

It looks like in Bedtime Vidal handed "Edgar Box" a stiletto to deftly stick between Capote's ribs!

But what of the mystery, you may well be asking, at this late point in the review?  I found the detection in Bedtime superior to that offered in Fifth Position. Though the later section again is too huddled, here Vidal makes more serious stabs at clueing.  There certainly are plenty of suspects as well, including, in classic fashion, a butler and a private secretary (John Dickson Carr warned readers to watch out for those private secretaries).

I thought the ending was a surprise, though in retrospect I should have seen it, which is always a nice feeling with a detective novel. And Vidal does provide some real--and rather subtle--clues.

In Death Before Bedtime Vidal shows he was learning the game--and playing it. In my view, he went on to produce the best of the Edgar Box bunch with his last mystery, Death Likes It Hot. See my next blog post for more!
Posted by The Passing Tramp at 10:19 PM