In the Bleak Midwinter: Todmanhawe Grange (1937), by J. S. Fletcher and Torquemada

Summer's right upon us here in the United States, but if you can try imagining a cold winter's night for this one--TPT

In the bleak midwinter
Frosty wind made moan.... 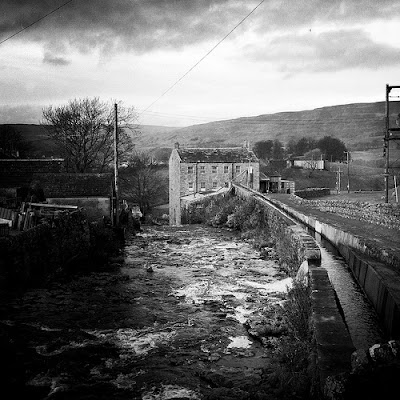 How often do long-lived, prolific mystery authors write their best books at the end of their lives?  To take two famous examples, compare Agatha Christie's Postern of Fate (1973) with her The Mysterious Affair at Styles (1920), published over a half-century earlier, and John Dickson Carr's The Hungry Goblin (1972) with his It Walks by Night (1930).  The comparisons are not flattering to the later books, I think most would agree.

Yet in contrast with Postern of Fate and The Hungry Goblin see the case of Todmanhawe Grange (The Mill House Murder in the United States), the final mystery novel published by the extremely prolific mainstream and mystery genre novelist J. S. Fletcher (about eighty Fletcher mystery novels, as well as numerous short stories, appeared between 1901 and 1937).

Todmanhawe Grange is, if not Fletcher's best mystery novel, certainly the best mystery novel by him that I have read.  And it was published posthumously, two years after the seemingly indefatigable author's death, at nearly seventy-two years of age.  Fletcher was working on the novel write up until he died.  After his death the manuscript was completed by Edward Powys Mathers, aka Torquemada, the creator of infamously challenging crossword puzzles and the crime fiction reviewer for the London Observer, who himself died four years later at the untimely age of 46.

How much did Torquemada's participation influence the result in Todmanhawe Grange?  I think to some considerable extent, though I also believe that Fletcher exerted himself at the end to produce something out of his ordinary rut. 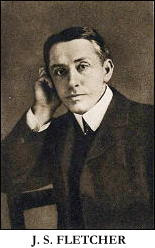 Journalist Joseph Smith Fletcher turned to the mystery and thriller genre in 1901, after having enjoyed some early success as mainstream novelist, particularly as an English regionalist in the manner of Thomas Hardy and Eden Phillpotts.

After 1901 Fletcher continued writing mainstream novels--largely about his native Yorkshire--but mystery tales increasingly dominated his output, especially after the publication in 1919 of The Middle Temple Murder, the mystery novel that became famous within the literature for having been praised (allegedly) by the United States President, Woodrow Wilson. Alfred Knopf, Fletcher's canny american publisher, never tired of reminding the reading public of this fact.

Knopf's publicity campaign for Fletcher probably was the best by an American publisher on behalf of a 1920s mystery writer prior to Charles Scribner's promotion of S. S. Van Dine in the second half of the decade. Fletcher became known for a time in the United States as the greatest English mystery writer after Arthur Conan Doyle.

Naturally appreciating the money that this publishing success was bringing in, Fletcher responded by producing ever more works of mystery fiction, both novels and short story collections. Many of his earlier, pre-Middle Temple Murder mystery novels that had not been originally published in the United States were reprinted in the country at this time as well (without informing readers that they were reprints), resulting in the regular publication of four or more Fletcher mystery novels a year.  Critics justly began to refer to the "Fletcher Publishing Mill."

After Fletcher's death, his books quickly fell out of print and today he survives in mystery genre history essentially as a one-work writer, the author of The Middle Temple Murder (praised--have you heard--by President Woodrow Wilson).  Yet, lo and behold, when I read Todmanhawe Grange I found that it was quite good, succeeding both as a fair play puzzle (something that can said of very few Fletcher mysteries I have read--which I why I call them mysteries, not detective novels) and as a crime novel of atmosphere and local color.

Surely, as I suggested above, some of the credit for the merit of the puzzle in Fletcher's last mystery tale must go to the brilliant crossword puzzle mind of Fletcher's posthumous collaborator, Torquemada.

Fletcher often cavalierly declined the fair play clueing convention of the Golden Age detective novel, but not in Todmanhawe Grange.  The novel also is the most atmospheric and engrossing mystery tale that Fletcher had written in some years.

In Todmanhawe Grange, we read of the last crime fighting exploit of Ronald Camberwell, a private inquiry agent introduced by Fletcher late in his writing career, in 1931.  Camberwell himself remains as interesting as he ever was (i.e., not much at all), but Fletcher's setting, a Yorkshire mill town, is quite well-conveyed, as are the people residing there.

The murder centers around the tangled affairs of James Martentoyde, head of a wealthy textile manufacturing family. Martenroyde, affianced to a much younger woman, contacts Camberwell's firm to investigate certain delicate matters.  On the blustery winter's night of Camberwell's arrival in the mill town John Martenroyde is found dead in the mill weir.  Ostensibly he slipped off the weir bridge.  However, his death turns out not to have been a natural one (surprise!).

Two additional murders follow, as well as Fletcher's much-loved lengthy inquests.  The reader is kept engaged throughout all these events, even the inquests (which admittedly can be dull in lesser hands).  Much of the second inquest was written by Torquemada, who provides excellent material and forensic detail that Fletcher himself tended to skimp in his mysteries.

The tale takes a rather striking Gothic twist and ends up bearing some resemblance, interestingly, to something out of the mind of Ruth Rendell, writing as Barbara Vine. This interesting twist seems to have been Fletcher's conception, as the older man is said to have plotted the entire tale (Torquemada wrote the final quarter of the narrative from Fletcher's outline; the very last line is Fletcher's).

The U. S. edition of Todmanhawe Grange, The Mill House Murder, does not acknowledge Torquemada's contribution to the novel, which seems churlish. Torquemada should be credited for his valuable contribution, but Fletcher also should be lauded for, like Puccini with his grand opera Turandot, going out with something very good, if not quite completed by his own hand.
Posted by The Passing Tramp at 6:16 PM