The daughter of Joseph Hocking and niece of Silas Hocking (the Hocking brothers were two hugely popular pietistic English Methodist novelists), Anne Hocking (1890-1966) was a prolific mystery writer, producing 44 genre novels between 1930 and 1962 (one more, completed by another author, was posthumously published in 1968).

Most of Hocking's 1930s novels were woman-in-peril (WIP) thrillers, but in the late 1930s she began shifting to more of a classical "whodunit" structure in her books.

In milieu these Hocking mysteries from the 1940s and 1950s are similar to those by Agatha Christie and Patricia Wentworth.  In fact one could say that Hocking out-Christies Christie in producing the sort of books people associate with classical English mystery. Filling the pages of Anne Hocking novels are villages, country houses, maids, butlers, impecunious relations and imperious, will-altering matriarchs/patriarchs just begging to be bumped off.

However, like Wentworth Hocking typically does not have Christie's "talent to deceive." Still, in her best books she compensates for this somewhat through good writing and depiction of character and setting. 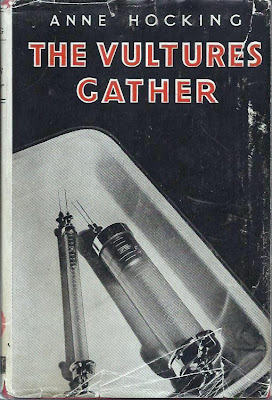 Several years ago I read Hocking's Six Green Bottles (1943) and thought it was extremely good.  It is set in Cornwall, Hocking's ancestral homeland; and I found it engrossing, rather resembling one of Christie's more serious mysteries from the forties, like The Hollow or Five Little Pigs.

In The Vultures Gather Hocking's detective, Inspector William Austen, is returned by the author to Cornwall, so that he can solve yet another murder in a genteel family, on behalf of the gentlemanly but utterly incompetent local Chief Constable.

The novel's murder is of a wealthy, tyrannical, elderly lady, just as she is about to change her will. This splendid old harridan is the best character in the tale, and something goes out of it when she expires (obnoxious murder victims so often are the most vividly presented characters in classical mystery).

However, the situation is certainly a classical one and makes for enjoyable reading for most of the book.  To provide love interest there is also Tamsin Tregellis, a winsome young woman who is a step-niece of the old lady's, and her charming beau, Peter Doyle, who happens to the temporary locum treating the old lady (she has a heart condition).

Both Tamsin and William Austen love to drop literary quotations on all occasions, giving the book something of a surface resemblance to a tale by Dorothy L. Sayers.

Indeed, both Christie and Sayers, as well as Arthur Conan Doyle, are referenced by the author in Vultures.  Here's the Sayers reference:

Austen Paused.  He was getting Shakespearian again.  He mustn't give way to it.  If he weren't careful he might get all Wimsey and start quoting Donne.

The quotation-loving Inspector Austen even is a Janeite ("a Jane Austen addict" as the author puts it) who can quote from Pride and Prejudice with facility (Jane Austen was a relative, it seems!).

For her part,Tamsin, not to be outdone, quotes characters from Sense and Sensibility.

And, indeed, from just about everything else!

"Wonderful!" Tamsin breathed, as with the deepest respect.  "'Bearing his blushing honours thick upon him, and so modest, withal.'"

The whole situation is so classical that even the characters comment on it:

"All this family stuff, you see, and certain defined suspects, and only one visible motive--money.  It quite follows the detective story pattern--almost too neatly."

Indeed!  But who doesn't like a good English genteel family murder?

There are good descriptions of the beauties of Cornwall and of hideous Victorian architecture, as well as some interesting speculations about social change taking place in England with the war and the coming of the Labour government.

Unfortunately, the the mystery plot itself proves something of a fizzle. Austen declares he is much more interested in psychology than mere material clues and seems to intuit things in a way that struck me as almost magical.

Particularly disappointing, given Austen's "psychological" approach, is a final chapter that feels rushed, as if Hocking grew bored with this year's book and was eager to get on to something else.

So, unfortunately, The Vultures Gather does not live up to the promise of Six Green Bottles.  Yet I found enough of appeal in this book to keep me interested in the author.

Now someday I'll have to reopen Six Green Bottles!
Posted by The Passing Tramp at 2:08 AM