Man Missing (1954), by the prolific and once very popular American mystery writer Mignon Eberhart (1899-1996), is the last installment of the author's Nurse Sarah Keate series (and the only one not reprinted in the 1990s by Bison Books).

Mignon Eberhart's first five mysteries all chronicle the adventures of Sarah Keate, one of these people in detective novels who simply seems destined to run into murder wherever she goes. These early Sarah Keate titles are: The Patient in Room 18 (1929); While the Patient Slept (1930); The Mystery of Hunting's End (1930), From this Dark Stairway (1931); and Murder by an Aristocrat (1932).

An additional Saran Keate title, Wolf in Man's Clothing (1942), followed after a decade; then last came Man Missing, after another dozen years.

After 1932 Mignon Eberhart almost entirely abandoned Sarah Keate in favor of one-shot mysteries, typically involving women protagonists who are as preoccupied with romance as murder (of course the two elements intersect).  Scrupulous clueing is downplayed in favor of rising emotional tension.

When Sarah Keate is the protagonist of an Eberhart mystery, the romance element is downplayed somewhat because it is experienced at second-hand.  Nurse Keate, a classic peppery spinster type, does not herself get involved in romance (she's much too busy listening at doors), though young love often is present (especially in the last two Keate books).  Although I'm probably not alone, I suppose, in wishing that Nurse Keate might have linked up with Lance O'Leary, the cop who helps her out in the first four books. 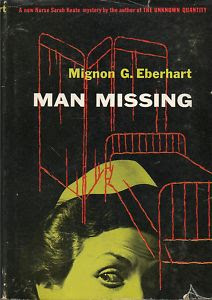 Lance is nowhere in sight in sight in Man Missing; and Nurse Keate, her hair now streaked with white (like Eberhart herself at the time, Keate has to be in her fifties), is on her own as she confronts yet more murder.  The previous Keate novels all had classic closed settings--hospitals, old mansions, a snow-bound hunting lodge--and Man Missing is no exception, taking place at an isolated military base in the American desert.

The first chapter, which occurs at night in the base hospital, is classic Eberhart/Keate:

Something was wrong and I didn't know what it was. But something, somewhere, was wrong.

And, sure enough, one of the patients will soon be found murdered in his bed, his throat cut!

In his chapter on Mignon Eberhart in Atomic Renaissance: Women Mystery Writers of the 1940s and 1950s (2003), Jeffrey Marks comments that with Man Missing it is "a nice change" to have Sarah Keate back as the protagonist, for she is "more self-reliant and observant than most of the latter-day Eberhart heroines." 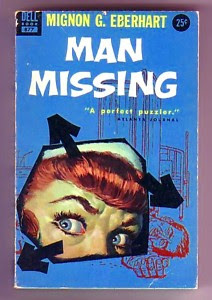 I agree with this. Sarah Keate is a good character and often I find myself tiring of Eberhart's other heroines, who seem pretty much interchangeable and fret a great deal.

Nurse Keate actually solves this case herself (though things come to a head in a way that makes her solution less relevant), in contrast with the typical Eberhart heroine, who seems to exist mostly to constantly register fear and anxiety.

Although there's a decent mystery plot here, to an extent I found a bit irritating this plot hinges on one of those HIBK young women who for a not particularly convincing reason refuses to divulge essential information (she's essentially the typical Eberhart heroine in the Keateless mysteries, here reduced to second fiddle status but still prominent).

Also, truth be told, I missed the high tension level of the typical Eberhart.  To be sure, the desert base setting is inspired, but too much of the novel is devoted to talk among the characters about what the truth about the mystery might be.

If there were more direct investigation of physical fact that might have sustained my interest, but Eberhart eschews such in favor of lengthy speculations, which can get somewhat tiresome. I found myself thinking "get on with it!" at times, I must admit.  This is something that should not happen in an Eberhart novel.

Still, I always enjoy reading about Sara Keate and I am sorry this was to be last rendezvous with mystery.  Further, the fact that one of the suspects is a hulking brute named "Buffalo Bill" certainly adds an odd frisson for anyone who has read/seen The Silence of the Lambs!

Any Mignon Eberhart fan should give Man Missing a look if it's reissued.  I know you're out there, because Mysterious Press has released over a dozen of her books on Kindle and they must know something!
Posted by The Passing Tramp at 5:28 AM