The Hara-Kiri Murder would have been a less subtle title for this first-rate genre novel, Invitation to Kill, written under the pseudonym Gardner Low by Australian journalist Charles Rodda (1891-1976). This appears to have been a one-shot pseudonym, and Rodda was much better known for the long series of thirty-seven Edgar Wallace style thrillers he published between 1927 and 1969 under the pseudonym Gavin Holt (in the 1950s he also co-wrote three novels with the great espionage writer Eric Ambler, under yet another pseudonym).  However, Gardner Low's Invitation to Kill is not a thriller but a true detective novel--and a rather fascinating one. 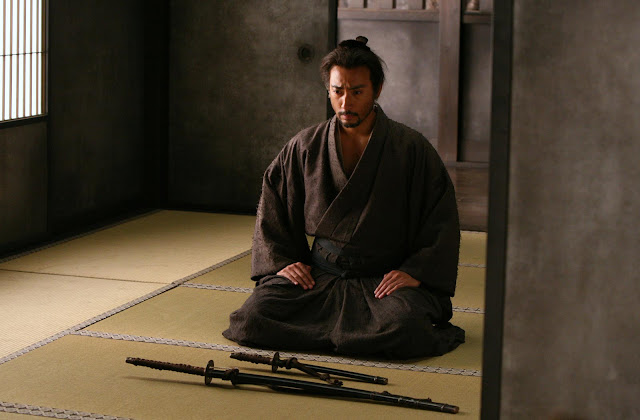 Not the least of the tale's interests is a rounded Japanese artist character, Yashushi Ishimoto, who introduces the subject of hara-kiri at a New York City cocktail party at the apartment of his old friend and fellow artist, Ross Farrier--with fatal results!

The wealthy Farrier is found dead in his apartment the next day, seemingly from a self-inflicted stabbing, performed in the ceremonial Japanese manner discussed the previous night.  But is it really suicide--or murder?!

Certainly there are a number of people who had motives to kill Farrier.  The middle-aged Farrier had taken pronounced interest in a beautiful--and much younger--distant "country cousin" of his, Linda Morell.  Linda is an object of interest as well to Farrier's sculptor friend Langley--and an object of scorn for Farrier's fiancee and Langley's wife.

There also is a certain amount of mystery around Linda.  She's under the care of a psychiatrist, for what seems a psychosomatic malady of the throat.  And her relationship with her rural farmer parents seems a bit odd.  And then there's Linda's jealous former boyfriend.  And what about Ishimoto?  He does know all this stuff about hara-kiri!

Invitation to Kill is quite well-written and fast-paced (one might say zippy), in the best 1930s American style.  One would never guess, given the author's complete grasp of American idiom, that he was an Australian, but then it seems he migrated to New York after World War One, when he was twenty-eight years old, and had been residing in the United States for nearly two decades when the novel appeared.

Additionally, here is more depth to the characters than is often the case in this period, and the clever plot nobly adheres to the principles of fair play.

So there is much here to recommend the novel.  As a bonus, the author uses a clever narrative device.  The novel, we learn right off, is actually the manuscript of one of the "characters" portrayed in the book.  The manuscript concerns a real life crime (in slightly fictionalized form).  The author is the amateur detective who was brought in by his psychiatrist friend to solve the crime.  He is reading the manuscript to the psychiatrist for his opinion on it.

Taking full advantage of this device, Rodda interlards the narrative with witty commentary on the detective fiction genre from these two characters.

"You'd better keep an eye on that detective of yours," the psychiatrist tells the author.  "He slips into some pretty terrible Broadway British.  I can see that he's going to be a good stiff pain in the neck.  So damned superior.  Why must he be such a stuffed shirt?  Can't you make him a little human?"

Early on the psychiatrist notes that "the material is all there for a psychological novel of characterization, and not a detective story."  Sounding for all the world like modern critics of traditional detective fiction, he laments that the author has turned it all into a mere puzzle.

Well, I for one, say thank goodness!  Invitation to Kill is a very good detective story indeed, with fair play plotting, wit aplenty and a felicitous style.  This is definitely a Golden Age mystery that deserves revival.  It should not have fallen through the cracks.

Consider this an invitation to republish.
Posted by The Passing Tramp at 2:18 AM