The thirty-one Leslie Ford novels (1931-1962), set in the United States, are more in the Mary Roberts Rinehart/Mignon Eberhart tradition, more mysteries than strict detection, with emphasis on the emotional entanglements of the characters as they confront murder.

The fifteen David Frome novels (1929-1950) are set in Britain and are more in the form, at least, of the classical British detective novel, with a male amateur detective, the meek and mild-mannered Mr. Pinkerton (more on him to come).

Here I deal with a couple very early Leslie Fords, Murder in Maryland (1932) and The Clue of the Judas Tree (1933), both of which preceded Ford's long-running series of novels about Grace Latham and John Primrose, for which she is best known today.

A native of California (though with Maryland ancestry) and a University of Washington graduate, Zenith Jones married Rhodes Scholar Ford K. Brown and after a year spent traveling Europe the couple settled in Maryland in 1925.  Brown taught for many years at St. John's College in Annapolis. 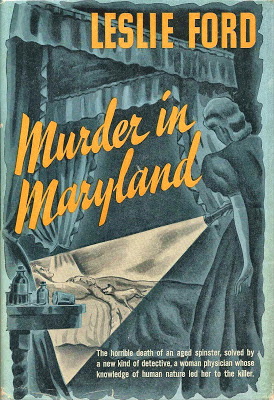 Most of the Leslie Ford novels, including the two under review here, are set in Maryland, and Leslie Ford should be seen as an important Golden Age local color mystery writer.

Ford doesn't write of Maryland with the depth that Todd Downing writes of Mexico in his 1930s detective novels, but at its best her work does have considerable wit and charm.

Unquestionably, in my view, the Maryland settings are a great part of the appeal of her books (although Ford's portrayal of black characters has been problematic for some readers, including this one, in modern times; see below).

Both novels have a series detective, Lieutenant Joseph Kelley, of the Baltimore police.  He is portrayed by Ford as an earthy character with a certain rough charisma.  He is especially ably presented in Murder  in Maryland.

Both novels also have women narrators, in the classic Rinehart tradition,  In Murder in Maryland it's middle-aged Dr. Ruth Fisher (yes, a woman doctor in 1932, hurray for Ford for giving us this character eighty-one years ago), while in The Clue of the Judas Tree it's just shy of thirty journalist Louise Cather.

Louise Fisher is quite Rinehart-ish: middle-aged and rather sharp-tongued, but good-natured at heart. Like any good Rinehart heroine, she also has a propensity to wander around cellars late at night and conceal evidence from the police.  I liked Dr. Fisher a lot and her relationship with the cop Kelly is very well done.

I don't know why Ford dropped Dr. Fisher.  I liked Louise Cather the journalist rather less, though the latter woman, like the novel's obligatory beautiful ingenue, gets a love interest and this part of the book is not badly done.


Anyway, I'd better stick to Murder in Maryland for now, or I'll get things hopelessly entangled.  Maryland presents us with that classic situation: the rich old bat, hated by all her relatives (justifiably in this case), who gets murdered in her old mansion in a small town.

When the aforementioned rich old bat, Nettie Wyndham, is poisoned (and her little dog too), there is no shortage of suspects, including:

1. her nephews Richard, Eliot and Chase Wyndham and her (beautiful) niece Gail
2. nouveau riche neighbor Alice Penniman, who covets old Nettie's elegant Georgian house and antiques
3. Alice's businessman husband, Samuel, who will do anything to indulge his wife (he made his pile in asbestos!)
4. Alice's and Samuel's son, Nat, who loves the put-upon Gail and also worries about what the strain of covetousness is doing to his mother's weak heart
5. Judge Garth, an old friend of the the Wyndham's, who knows the great depth of Nettie's nastiness
6. Daphne Lane, platinum blonde hairdresser, who seems to be on the make somehow

Oh, Nettie's old African-American butler, John (as with all Leslie Ford's black characters--servants all--we get no hint of a last name) is named as a suspect as one point, but Dr. Fisher promptly pooh-poohs this notion, on classical Golden Age detective fiction grounds:

It didn't seem quite fair to me.  It was too much like a mystery story in which you come to the last chapter and find that the third footman poisoned the Duke's Bovril because he didn't like the color of his braces.

When it comes to murder in the classical detective novel, most often servants are, to borrow the title of a John Dickson Carr novel, below suspicion.

There's a lot of plot aboil in this black cauldron of a novel: there's poisoning, theft, a missing will and poison pen letters, sprinkled with some nicely-attuned social observation about life and manners in a small southern town dominated by one nasty old relic of the ancient (by American standards, anyway) aristocracy:

What Estaphine [Dr. Fisher's cook] meant was that Miss Nettie didn't approve of women's practicing medicine, and that she'd never been a a patient of mine.  The odd part of it is that Estaphine, like nearly everybody else in town, knew Miss Nettie's opinions on every possible subject, from the complaints about the spinach at Miss Sally's boarding house to the length--or lack of it--of the new first grade teacher's hair.  And they're all unpleasant opinions....

I also enjoyed, as mentioned before, Dr. Fisher's tart relationship with Lt. Kelly:

I should have liked to have put these question to Lieutenant Kelly, but he sat beside me with an air so cocksure that I held my peace.  At least I did until he turned to me with the remark, "Would you say, Doctor, that Mrs. Penniman is a little batty?"

I have of course often said that Alice Penniman is as crazy as a loon, and meant it.  But that was either to Alice, her husband, or her social secretary [the beautiful Gail Wyndham].  Certainly not to a detective.

There is so much mystification in Murder in Maryland that at the end (a full-scale trial sequence) Ford can't quite explain everyone's actions in an entirely plausible way, but on the whole the puzzle plot element is a good job.  Ford's choice of murder culprit seemed to me to have a thematic appropriateness to it.

The Clue of the Judas Tree, which followed Murder in Maryland just a year later, signals a creative slump.  Another setting in a mansion, but this one, a Tudor structure brought over from England, is a product of new money (how vulgar!).

The whole thing is not as feelingly done (the author finds the ways of the old white southern aristocracy more fascinating), the characters seem more synthetic and the plot is, frankly, a mess.  Ford manages a last-minute switcheroo in culpritude, but at the cost of credibility.

I couldn't exactly understand the killer's motivation for two or maybe three of the four murders, which is never a good sign in a murder mystery!

Explanations of criminal motivations were quite labored.  And the title of the novel is really a throwaway, because the Judas tree is simply not that big a deal.

Rue Morgue Press has rejected pleas by Ford fans to reprint her novels:

There are those like Leslie Ford, whose ubiquitous and unconscious racism automatically eliminates her from our consideration [for republishing], customer requests notwithstanding.--Tom Schantz and the late Enid Schantz of Rue Morgue Press 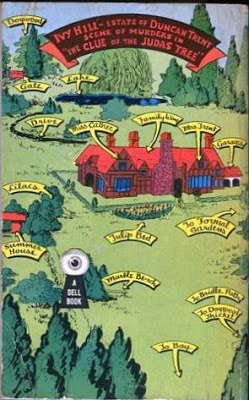 This view of Leslie Ford has been strenuously challenged by a couple bloggers.  See Leslie Ford's Fall From Grace and Leslie Ford: The Material Girl's Guide to Murder.

Look at the uproar in 1939 over the refusal by the Daughters of the American Revolution to allow Marian Anderson to sing at Constitution Hall.  First Lady Elanor Roosevelt resigned her D. A. R. membership over this shameful exclusion.

What would Leslie Ford's fine Maryland ladies--no doubt all D. A. R. members, by hook or by crook--have done?  It would be nice if Ford had ever really bestirred herself to take a deeper look at the life of African-Americans in Maryland, but in the books I've read it's been strictly the "great lady" view from the top.

Still, despite the undeniable racial condescension that pops up in the novel at times, I have to admit that I found Murder in Maryland a good crime novel.  Over the years Leslie Ford novels have been praised by discerning and socially conscious critics of the genre, including Marcia Muller, Ellen Nehr and Jeffrey Marks.  There is merit in Leslie Ford's work, I believe, and it should be reprinted.
Posted by The Passing Tramp at 4:10 AM