Peter Yates' Bullitt, starring Steve McQueen, is one of the seminal modern crime films, renowned for its influential car chase sequence.  Less well-known (except perhaps to mystery fans) is that it was the winner of the Edgar Award for the best film of 1968, beating out Francois Truffaut's The Bride Wore Black and Roman Polanski's Rosemary's Baby, as well as The Boston Strangler.

Robert Fish won an Edgar for best first novel for The Fugitive (1962).  I have to admit, however, that I have read neither of these novels. 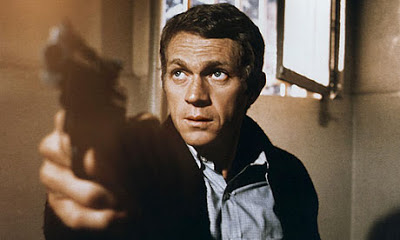 Though Bullitt feels to me very modern in reference to that which came before it, often you read people on the internet today commenting that they find the film boring (though of course the film has very committed supporters as well).  Not me!  I'm sure I could watch Bullitt once a year for three decades and still be riveted by it the thirtieth time. 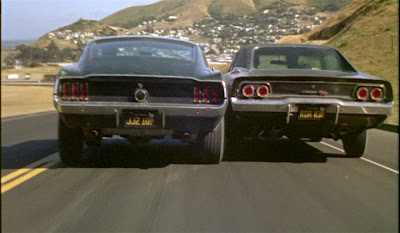 The great car chase still holds interest today (the absence of cgi is genuinely refreshing, I find), though I regret never having seen it on a theater screen (I was two when this film opened--I never actually saw a Steve McQueen film at the theater in my life).  But besides the car chase I love the San Francisco setting, the period style, the fine actors and, yes, even the sometimes criticized plot. 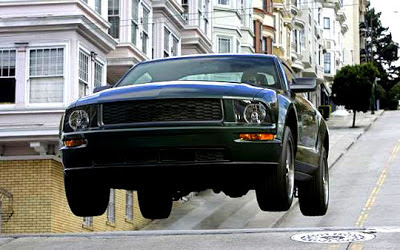 The period that Bullitt represents, the late 60s, is often ridiculed as the age of plaid and polyester and the fell word groovy, but everybody and everything looks so cool and stylish in Bullitt (it sounds cool and stylish as well, due the jazzy score by six-time Oscar nominee Lalo Schifrin).  Yet it's not overly-stylized as arguably is The Thomas Crown Affair.  There's a serious air of documentary-like realism to the acting and filming of Bullitt that I found very appealing.


This sort of film is tailor-made for Steve McQueen and he is utterly masterful as Frank Bullitt, a tough, honest and dazzlingly efficient cop (and so very stylish dresser).  As his posh girlfriend Cathy, Jacqueline Bisset is stunningly beautiful--she gives new meaning to the word "leggy"--though she doesn't have too much to do in the film besides enjoy intimate moments with Bullitt.


Nevertheless, Bisset does get to drive Steve McQueen about a bit in her color-coordinated canary yellow Porsche and later to complain that his job is making him callous.  "What will happen to us in time," she wonders, giving old Steve the chance to reel off this rejoinder: "Time starts now."  I'm still trying to figure that one out, but it seemed to work for Bisset, so I'm cool with it.

Besides Bisset, women figure in the film professionally as nurses and stewardesses--nary a policewoman is seen, even one who does nothing more than, say, carry cups of coffee to the men (times, happily, have changed).

I think this was the role that typecast Vaughn as this sort of character for years to come (he is indeed very good at it).Vaughn's almost immediately antagonistic relationship with McQueen is really well done.

The intense duel that ensues between these two men who absolutely loath each other is central to the film and a true pleasure to watch.


I'll leave off a discussion of the engrossing mystery plot for those of you who may not have seen the film yet.  The enigmatic ending leaves the audience anticipating a sequel that never came, sadly.  I suspect that the idiosyncratic McQueen turned down the chance to make a sequel (he seems to have turned down more great scripts than any actor in film history). Still, at least we have one Bullitt.
Posted by The Passing Tramp at 1:57 AM