The two long crime novellas collected in Margery Allingham's No Love Lost, "The Patient at Peacock's Hall" and "Safer Than Love," were written by Allingham in the early 1950s for glossy American magazines, respectively The Saturday Evening Post and Woman's Journal.

Coupled with two earlier 1940s novellas, "Wanted: Someone Innocent" and "Last Act" they constitute Allingham's body of frankly commercial postwar writing for what Raymond Chandler derisively termed the "slicks": glossy magazines catering to a large female audience.  They offered the taxation-pressed crime writer a lucrative source of income, though Chandler for one turned up his nose at them, believing that one had to compromise one's artistic integrity writing for them by providing conventional happy endings, most importantly a nice young man and a nice young woman happily coupled (Chandler was not big on "love interest" in general).

For her part, Margery Allingham, according to Julia Jones' biography of the mystery writer, referred to them as her "little bastards," believing they did not merit canonical status with her artistically "pure" Albert Campion novels.  Certainly, "The Patient at Peacock's Hall" and "Safer Then Love" provide readers with conventional happy endings, but they are worthwhile tales with interest today, in part because they constitute Allingham's most notable contribution to the a subgenre that was making great strides in the 1950s: feminine domestic suspense. 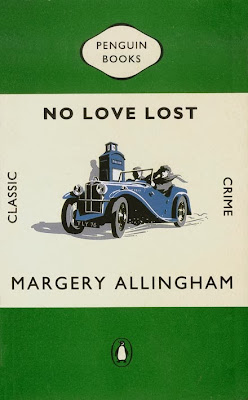 Two of Allingham's three 1950s Campion novels are suspense novels, or crime thrillers, the celebrated The Tiger in the Smoke (1952) and the arguably superior Hide My Eyes (1958), but they are not true examples of feminine domestic suspense.

"Patient" and "Love" are the true articles, however. Both center on a female protagonist (and narrator) in a provincial English town who is pining over an abruptly and painfully severed romantic relationship and seeks to submerge her love problems by accepting a new position (career/marriage) in life.

In "The Patient at Peacock Hall" the protagonist is Ann Fowler, a doctor recently arrived in the town of Mapleford to work in the practice of elderly medico Percy Ludlow.

Allingham wrote "Patient" around the time of the 1950 and 1951 British national elections, when the Tories were trying to oust Labour from power (they finally succeeded in 1951); and she takes times to condemn in no uncertain terms the National Health Service instituted by Labour:

The waiting-room was packed and I cursed socialized medicine.  To my mind its weakness was elementary, and I felt someone might have foreseen it.  Since everyone was forced to pay a whacking great monthly premium for medical insurance, nearly everybody, not unexpectedly, thought they might as well get something out of it; and, as far as Mapleford was concerned, the three who stood between nearly everybody and the said something-out-of-it were Percy and his two assistants, who had not been exactly idle before....As Percy said, it was almost a relief to find someone who just had a pain.

These reflections of course have special interest right now in the United States, as the Affordable Care Act is much in the news of late.

In "Patient" (as in "Love") Allingham satirizes the prying, gossipy ways of small English localties, and anyone who enjoys Agatha Christie's village mysteries will enjoy Allingham's take on this setting. Part of the problem our heroines face in both "Patients" and "Love"--besides their romantic troubles--is that they don't really "belong" in the provinces, being more sophisticated London types by nature.

Much of "Patient" is devoted to setting up Dr. Fowler's entanglement in a dastardly crime. Step-by-step she gets herself further implicated, with a sinister puppet-master pulling the strings.  Part Two of the novella concerns how she gets herself out of this mess.  I'm being deliberately vague here, so as not to spoil things for new readers.  "Patient" is an enjoyable tale of suspense and I want people to have all the pleasure of reading it fresh, if they choose to read it. 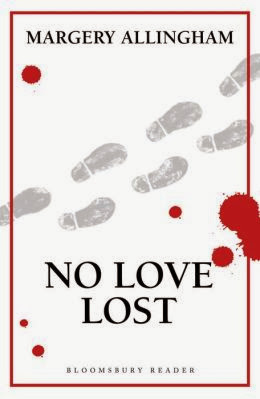 Unlike "Patient," "Safer Than Love" is a genuine detective story.  It is about Elizabeth Lane, who makes a "safe" marriage to a preparatory school headmaster in Tinworth, another nosy provincial town. Bad choice, Liz! We never meet her husband, Victor, when he is alive, but everything about him makes clear we would not have wanted to know him.

When Victor is found murdered it is clearly "no great loss"; but, unfortunately for his widow, she and her ex-boyfriend (the man she really loved, even though she married "safe" Victor), become the obvious suspects.

"Love," is longer than "Patient," arguably a short novel rather than a long novella, and I found the portrayals of provincial and school life richer (some of the police actions seemed implausible contrivances, however). There are some colorful "types," including a marvelous char, a Mrs. Veal, and the writing is witty, sharp ("They were sound people, thoroughly country and thoroughly crude"--ouch!) and, occasionally, poignant:

"I did love you once."  The line from Hamlet came back unbidden, the most cruel thing man has ever said to woman, my English mistress had once remarked in a moment of uncharacteristic self-revelation. A whole classful of girls had gaped at her, but she had been right.  I knew it now.

But, don't worry, ultimately love conquers all, including suspicion of involvement in an unnatural death. If, unlike Raymond Chandler, you can accept (or, better yet, even embrace) this particular fictional certitude, you should enjoy both these works, as I did.  No Love Lost is available on the used market, of course (like most of Allingham's work, it was frequently reprinted), and is currently available as an eBook as well.
Posted by The Passing Tramp at 1:23 AM