Fascinatin' Fibsy: The Mark of Cain (1917), by Carolyn Wells

It may not surprise some of you to learn that I've been writing a long Carolyn Wells essay for a collection--so, here you go, one more Wells piece.  Bear with me, the next piece will be on a new writer!

But, any road, I've been enjoying these early Wells books more than I expected, given my experiences with some of her later books, which were definitely what Bill Pronzini has termed "alternative" classics. 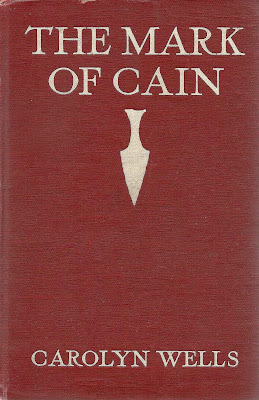 The Mark of Cain would, however, be no more than an average detective novel from the Edwardian era (let's say roughly the first two decades of the twentieth century), were it not for the debut of a new Wells character, Terence "Fibsy" McGuire.  It's Fibsy who raises this book out of the ruck.

In The Mark of Cain, someone has stabbed wealthy amateur naturalist Rowland Trowbridge and left him dead in the woods.

Who could it have been?!  At first suspicion centers on the Camorra (one of several indicators in this novel that Wells had been reading American pulp crime fiction)--but we know better than that, don't we?

Avice, Trowbridge's beautiful twenty-year-old niece and ward (is there any other kind in these books?), certainly wants to find the killer, but Eleanor Black, her uncle's fiancee and housekeeper seems oddly uninterested in doing so.

Avice turns for help to her uncle's best friend, the highly respected Judge Leslie Hoyt--especially after suspicion starts to focus on Kane Landon, Eleanor's cousin of sorts (he's a nephew of Trowbridge's deceased wife). Kane is a young man who went out West, and everyone knows what violent habits those Westerners have!  Why, they'd shoot a man soon as shake hands with him!

Avice, it seems, is in love with temperamental Kane Landon, who appears to return her affections.  But then everyone seems to be in love with Avice.  There's Judge Hoit himself, not to mention one Pinckney, ace crime reporter.

Well, office boy Fibsy McGuire, anyway, is not in love with Avice. He's got his nose stuck in the pages of crime magazines.

Fibsy has the "detective instinct," you see, and he's determined to find out who killed his boss, even if it pits him against some of the most prominent people in the state (like Judge Hoit).

Fortunately, Fleming Stone believes him, and Fibsy will serve as Stone's assistant for Wells' next seven Fleming Stone mysteries.

This is an enjoyable novel. Wells finally got out of the country house and diversified her patrician set with working class and immigrant characters. Fibsy is Irish-American and speaks heavily rendered "street slang," but Wells, who could be a terribly snobbish writer, makes clear she is on his side and that he's smart as a whip.

I definitely found myself rooting for the lad.  I was less concerned with Avice's love life, I admit, although Avice thankfully is not Wells' usual haughty "tragedy queen" (drama queen, more like) or exasperatingly "saucy" coquette (unfortunately Wells succumbed to her addiction to such tiresome characters in later books)

The title reflects the last words of Rowland Trowbridge, and is actually one of those dying message clues that became so famously with Ellery Queen.  It's interpreted three different ways over the course of the novel.  There's no locked room problem, but, given how Wells typically solves her locked room problems, it's just as well there isn't.

Recommended if you like getting out of the country house every once in a while.
Posted by The Passing Tramp at 3:28 AM