Pavane for a Dead Princess: Banshee (1983), by Margaret Millar

There was no prisoner.  No one had been arrested or even detained for very long though hundreds had been questioned, everyone who lived in the neighborhood or worked there or had reason to come deliver mail or newspapers, to read meters or service water softeners, to sell cosmetics or religion; migrant fruit pickers, registered sex offenders living in or passing through town, even a self-styled holy man who claimed to live only in the past and in the future.  After sampling the food and accommodations at the county jail he conceded he knew nothing of the future, remembered only a few fragments of the past and preferred to spend the present on the outside rather than the inside.  He went back to banging his tambourine and panhandling along the beach-front, and the death of the little princess remained a mystery.

The late crime writing couple Kenneth and Margaret Millar (1915-1983/1915-1994) both were born 100 years ago this year and accordingly they have been getting additional attention from the publishing industry of late.

The Library of America has published Ross Macdonald: Four Novels of the 1950s (edited by Tom Nolan), elevating Ross Macdonald--the pseudonym of Kenneth Millar--to its ultimate crime fiction pantheon, along with Dashiell Hammett, Raymond Chandler, Elmore Leonard and David Goodis; while they have given Margaret Millar a single spot in their Women Crime Writers: Eight Suspense Novels of the 1940s and 50s (edited by Sarah Weinman).

See links to these volumes here and here. A Sixties Ross Macdonald collection from the LOA is forthcoming.

The Millars also feature prominently in the recently published Meanwhile There Are Letters, a collection, co-edited by Tom Nolan, of the correspondence between Eudora Welty and Kenneth Millar.  I will be reviewing this book soon.

As any reader of Tom Nolan's biography of Ross Macdonald or Meanwhile There Are Letters will know, the Millars' later years were marked by personal tragedy and physical debilities (the death of their troubled only child, Linda, Kenneth's Alzheimer's and Margaret's cancer and macular degeneration).

Kenneth Millar published his last Ross Macdonald detective novel, The Blue Hammer, in 1976, before Alzheimer's closed his world in on him; but Millar managed to produce five more crime novels between 1976 and 1986, three of which are, I think, up to the standards of her earlier work, some of the greatest crime fiction in the genre.

One of these better late novels is Margaret Millar's penultimate crime tale, Banshee, published the year of her husband's death.  This novel has been praised by my friend Jeffrey Marks, who has written about Millar in his book on mid-century American women crime writers, Atomic Rennaissance, and I second that praise. 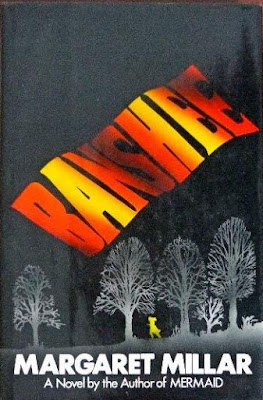 The inspiration for Millar's book seems to have been  the composer Maurice Ravel's beautifully pensive Pavane pour une infant defunte, which is explicitly referenced by a character in the book, though he credits the work to Claude Debussy.

The first chapter of Banshee details a week in the life of Annamay Hyatt, the indulged eight-year-old daughter of the wealthy Kay and Howard Hyatt. Dubbed the princess by Millar, Annamay even has her own "castle" playhouse specially commissioned for her by an architect friend of the Kays, Benjamin York. Annamay is a "golden child" as the phrase goes, and the reader likes her too, as she is charmingly portrayed by Millar.

Sadly, Annamay vanishes one day; and the second chapter details the child's funeral, her bones having been discovered near the Hyatt estate, "a mile or so up the creek under a pile of forest litter covered by a tangle of poison oak.  The poison oak was red with autumn by this time and very pretty."

I think most people concede that Millar's peak as a crime writer took place around 1950 to 1964, when she published nine mystery novels, many of which are among the mid-century's masterpieces of the genre.  Yet Banshee is on a level with this earlier work.  By turns funny and sad, warm and cold, Banshee depicts the baffling enigmas of human life in addition to the strange mystery of a beloved child's death.

The mystery puzzle element in Banshee is quite well done, with Christie-esque traps for the reader and a twisty solution that surprised me, even though the clues are there; but the tale also has notable psychological depth.  Though a short novel, around 60,000 words, there's as much insight into people as you get in some modern crime tomes that are twice or even thrice as long.
Posted by The Passing Tramp at 10:08 AM