Anthony Gilbert's An Old Lady Dies is the penultimate novel in the author's ten book Scott Egerton series (on #5, The Night of the Fog, see here).  When it was published it was subjected, as I see it, to a rare uncharitable review from Gilbert's Detection Club colleague Dorothy L. Sayers, then mystery reviewer for the Sunday Times.

Sayers chidingly noted that this was the third Anthony Gilbert novel published "within a year" (The previous two were 1933's Death in Fancy Dress and The Musical Comedy Crime; Gilbert between 1927 and 1934 published a dozen detective novels, an average of three every two years, while Sayers in the same period published eight, an average of one a year) and she pronounced this "rather good going."

Apparently feeling that prolific production threatened to sap her friend's talent and turn her into a hack, Sayers went on to lecture the younger writer on the perils of publishing three books in the space of a year. (Although to be fair to Gilbert, she had published two mysteries in 1933 and would again publish two in 1934, not exactly an unknown rate for mystery writers of the period--Agatha Christie herself often published two detective novels a year in the 1930s, including in 1934, the same year of this Sayers review, and one of the novels was Murder on the Orient Express.) Sayers wrote:

The greatest genius is usually attended by a considerable fertility, but, as a rule, it is too much to expect a fresh masterpiece every four months. With the detective story the temptation to over-production is especially dangerous: first, because it is only too easy to shake up the old pieces of the kaleidoscope into what looks something like a new plot, and, secondly, because the public (and this means You!) is still too indulgent to hasty and mechanical writing where mysteries are concerned. This is not to say that "An Old Lady Dies" shows any noticeable falling-off from the author's usual standard; in fact, it is quite up to average, and is actually better put together than "The Musical Comedy Crime."  But I do not feel that there was any strong and compelling reason for writing it.

Ouch! Personally, Sayers' chastisement notwithstanding, I think the book's existence is easily justified by the fact that it is quite an enjoyable detective novel.

In her review Sayers actually allows that in An Old Lady Dies the "various characters are quite well distinguished" and "there are passages of pleasing dialogue" and an "exceedingly ingenious device" by which the the "culprit is forced into confession," but then fatally undercuts this praise by pronouncing that the novel "is not memorable."

It's easier to understand Sayers' rather harsh criticism of what actually is, as I wrote above, quite a good detective novel, if we appreciate how at this time Sayers herself had become somewhat bored with the puzzle-oriented mystery and apparently expected everyone else to share her latest views on the matter. Sayers at this time was writing a novel, Gaudy Night, that some modern genre critics and fans consider a masterpiece, and I suppose one could say she complimented Gilbert by suggesting that she might do the same herself.  (Apparently one needs a year to compose a mystery masterpiece.) Yet we modern readers who are not so jaded as Sayers was with a surfeit of traditional detective novels are perhaps more likely to appreciate the classic craftsmanship that Anthony Gilbert put into An Old Lady Dies.

An Old Lady Dies involves the classic situation (which perhaps Sayers found dull by then) of the tyrannical old person with a string of impecunious relations who is conveniently done in most foully. After hateful old Mrs. Wolfe is fatally poisoned at the Manor in the village of Aston Merrry, suspects immediately can be found among her much younger husband, Simon Wolfe; her spinster daughter, Dorothy John; and her five charming grandchildren by her four other, now deceased, children.

After an inquest finds one of these individuals responsible for the murder--this is a fictional inquest where things really do pop--a private investigator is brought in with the hope of finding another culprit, and very late in the novel Scott Egerton is solicited to look over all the gathered facts.

In a classic case of mostly armchair detection, the brilliant and elegant Liberal MP alights on the culprit, who is forced out by, as even Sayers admitted, a most ingenious gambit.

While An Old Lady Dies is not nearly as atmospheric as The Night of the Fog (and not nearly as, um, long as Gaudy Night), I enjoyed it immensely, finding it smoothly readable and well-plotted.

Throughout the novel interesting characters pop up, like the shopkeeping couple who have finally attained their dream of retiring to a house near the sea, and Gilbert writes up her spinsters most effectively as usual.  There was also this striking passage, in which Gilbert discusses her MP sleuth's view of the parlous political scene in 1934:

The world, as Egerton saw it, was in a nasty mess, and the few people who cared about it were groping like ants in a vast Babylon surrounded by ruins that might collapse on their heads at any moment.  He had particular troubles, too, in his own constituency: unemployment was rife, and men who had suffered damage in the war. and recovered from it, were slipping back into their ancient disabilities; the spirit of dogged hope was breaking, and in its place came fear, dereliction, defiance; it might eventually break into open rebellion.  Egerton, who deplored all unscientific and unconstitutional methods, had to admit that he couldn't blame the participants if it did. 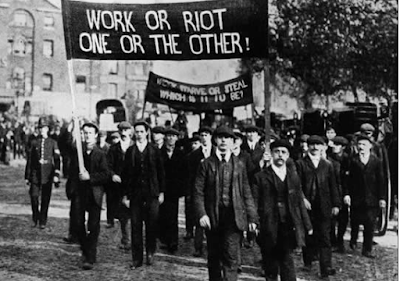 Sayers may not have found this memorable, but I did.  To be sure, it's rather obiter dicta as far as the story is concerned, but the story itself, as I have indicated, is far from shabby. This is another good'un from Gilbert as far as I'm concerned.

An Old Lady Dies now is available in a modern edition in the UK, though not in the US.

Note: For a discussion of how three Golden Age British detective novelists, GDH and Margaret Cole and Henry Wade, dealt with political and social issues in their crime fiction, see my newest book, The Spectrum of English Murder.
Posted by The Passing Tramp at 7:50 PM