It's interesting times we are having in the world of vintage mystery blogging and publishing. When McFarland published my book Masters of the "Humdrum" Mystery three years ago I was often told no one outside of compulsive crime fiction collectors wanted to read forgotten Golden Age mystery writers. Now in 2015 a lot more people are getting in on this game, which has led me to think about what might be termed some ethical questions concerning publishing and the vintage mystery blogging community.

Recently the British Library's success with their Crime Classics mystery reprint series seems to have inspired an imitator, in British independent publisher Pepik Books' Lost Crime Classics series.  The style of the books looks similar to me. Books in both series have quite attractive covers, drawn, it appears from vintage poster art.

I was amazed how many excellent books are lost: their authors long forgotten about and their stories gathering dust in bookshops and charity stores.

American Queens of Crime is Pepik Books' first series of rediscovered crime novels. Only quality detective fiction that I have personally read and truly enjoyed makes it into the series. 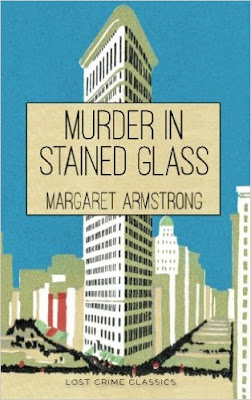 Godspeed, Claire Thayers, but as far as I'm aware, it was I, your Passing Tramp, who on the internet first publicized Anita Blackmon and Margaret Armstrong, the pair of authors in Pepik Books' American Queens of Crime series, way back in 2012.

Not long after I started my blog I did a two-part series on forgotten "Had-I-But-Known" authors. Can you guess who the two authors in the series were?  I'll give you two guesses.

The first author, about whom I blogged on 11 January 2012 was Anita Blackmon, in a post titled

Had I But Known Authors #1: Anita Blackmon Crime Queen of Arkansas

About two weeks week later, on 28 January 2012, I wrote about Margaret Armstrong in a post titled

Had I But Known Authors #2: Margaret Armstrong: HIBK Patrician

So the two authors in British publisher Pepik Books' 2015 American Queens of Crime series are the two authors I highlighted in a 2012 series on my blog.  Mere coincidence?

I also note that in fact Coachwhip reprinted the two Anita Blackmon mysteries a year ago, with an introduction commissioned from me. (Here are links to the first and second Blackmon books reprinted by Coachwhip.)

Coachwhip recognizes my work in rediscovering--I use this word advisedly--forgotten mystery authors and they remunerate me for commissioned introductions, so I am, I hope understandably, a bit biased in their favor.

Nor is Coachwhip the only publisher to do this.  Just this month I have been at work on introductions for mystery reprints by three different publishers. I would be pleased to work with other interested publishers as well.  I can assure them I know of a great many additional forgotten Golden Age mystery writers, many of whom are worthy of rediscovery and republication.

The Anita Blackmon reprints have not gotten the attention of those of say M. Doriel Hay, but I'm glad to say that they, like the Ianthe Jerrold books with Dean Street Press, another publisher with whom I have worked, have received good word on Amazon.com and Amazon.co.uk.

Here are some excepts from reader reviews of Blackmon's mysteries on those websites:

[T]he grumpy but lovable personality of Miss [Adelaide] Adams keeps the reader hooked....  Readers who enjoy vintage mysteries are likely to be charmed by [Murder a la Richelieu]. The succinct introduction is very helpful in placing Anita Blackmon among the various styles of Golden Age writers.

[Murder a la Richelieu] has a strong plot with many wonderful characters. The pace never falters from one shocking death after another.

This is a very fun book [There Is No Return], with a feisty, quirky narrator (Miss Adelaide Adams), lots of suspicious characters, several star-crossed lovers for Miss Adams to advise, and plenty of supernatural terror in the air.  A real find for lovers of vintage mysteries!  The introduction in this edition, succinct and informative, adds to the reader's pleasure.

You'll be guessing right up to the end.  Adelaide Adams is a most delightful old young at heart spinster and accidental detective....  [T]he story [There Is No Return] is terrific.

Anita Blackmon is a forgotten national treasure.  What a great sense of humor, with telling observations of character and lovely descriptive passages. She's a real peach of a read.

I'm so pleased for that kind of feedback for an author I helped get on the literary map again. I'm especially pleased that the Amazon reviewers liked the winning character of Adelaide Adams as much as I did.

However, to toot my own horn here (needs must when the Devil drives), I write about mystery fiction not just for pleasure, but also with some expectation of being recognized and perhaps even remunerated for my work, which includes critically praised books on the subject that have appeared every year since 2012. While my blog, which has been praised by such prominent critics as Michael Dirda and Sarah Weinman, is not, strictly speaking, for profit, I would like at least to be recognized for the work that appears on it.

Do other bloggers feel the same way about their blog work? Over the next week, in addition to some other more typical blog pieces (reviews and such) I'm going to go over some notable vintage mystery writer rediscoveries that have been made by myself and others in the blogging community and I'm going to evaluate how these rediscoveries have fared at the hands of publishers.
Posted by The Passing Tramp at 6:58 PM