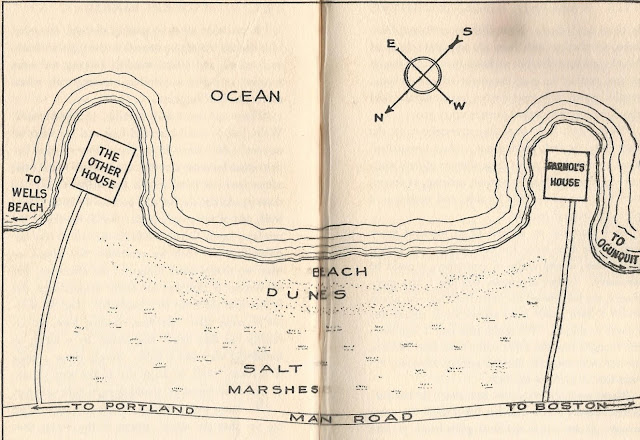 Clifford Orr's second detective novel, The Wailing Rock Murders (1932), has many of the features classic mystery fans love: a mysterious country house (actually, two of them), murder in a locked room (actually, two of them), a map, a floor plan and lots of shuddery atmosphere, including a rock formation the "wails" of which are said to foretell death.  The Rock certainly got it right in this case! 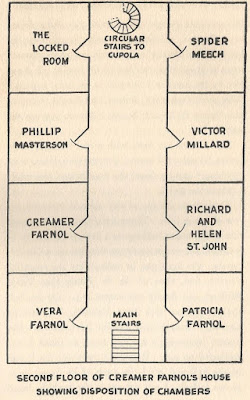 The events of the novel take place one late evening and early morning after Great Detective Spaton Meech discovers his beautiful young ward, Garda Lawrence, with her throat cut in the cupola room at Creamer and Vera Farnol's Victorian monstrosity of a mansion, perched on a cliff near Ogunquit, Maine. (This mystery takes the cake for odd names.)

Spaton Meech certainly is an unusual sleuth: he is nicknamed "Spider" on account of his hunched back, gangling arms and large head which he rests on his chest when he walks. Yet though his form is unprepossessing, to say the least, he is renowned here and yon as a Great Detective and he soon is essentially running the local sheriff's investigation, in the fashion of so many Golden Age mysteries.

Like a John Dickson Carr novel, The Wailing Rock Murders excels in atmosphere and brisk narrative pace, though it lacks, it must be admitted, the marvelous mechanical complexity of a Carr mystery. On the whole the novel strikes me as something of a Carr--S. S. Van Dine mashup (think The Greene Murder Case), though in fact Carr at this time (1932) had not achieved the outright mastery he soon would.

Unfortunately, just as Orr was really hitting his stride (his previous mystery was The Dartmouth Murders, reviewed here), he stopped writing detective fiction. Happily, however, both of Orr's detective novels will soon be available from Coachwhip, in a twofer edition with an introduction written by me.  And more is to come!  More on that soon, plus detail on the new book.

Posted by The Passing Tramp at 9:23 PM