"There's somebody dead in the linen closet at Crestview," she said, her voice flat.  "I thought maybe you'd better come up."

In 1937 bestselling American mystery writer Mary Roberts Rinehart (1876-1958) bought a house, Fairview, in Bar Harbor, Maine, and summered there for the next decade.  The next year she set her next mystery novel, The Wall, in a fictionalized Bar Harbor; and in 1945 she returned to this setting in her penultimate mystery novel, The Yellow Room. 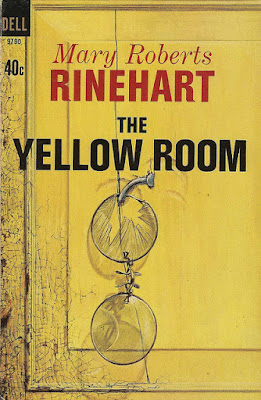 Rinehart, as regular readers of this blog will know, is famous as the head of the HIBK, or Had I But Known, school of mystery fiction, noted for its foreboding first person narration.  Most of Rinehart's mystery novels rely on first person narration, very rarely by a man (The Red Lamp), but usually by a middle-aged spinster (The Circular Staircase, The Door) or eligible but unmarried young woman in her mid- to late-twenties (The Wall, The Swimming Pool).

The Yellow Room is uncommon in that in it Rinehart eschews first narration for the third person.  To my mind this narration does not play to Rienhart's strength as a mystery writer.  The reader identifies less with the main character and the events seem to lose urgency.

Not the narrator but the initial focal character of The Yellow Room is Carol Spencer, a young woman from a declining genteel family saddled with a neurotic widowed mother, a beautiful, selfish sister who married for money, a brother susceptible to liquor and ladies who has been fighting in the Pacific but has now returned home "to be decorated by the President himself," and the memory of a pilot fiance shot down over the Pacific and presumed dead. 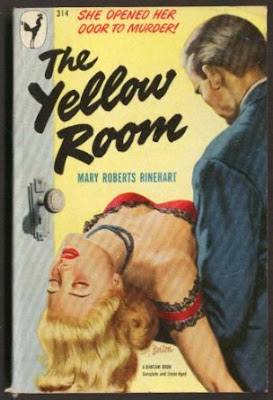 With her faithful housekeeper Maggie (Irish Catholic, naturally), and two skittish temporary maids (help is so hard to find during the war), Carol has returned to Bayside, Maine to open the family's summer home, Crestview.  What they find in the linen closet at Crestview is unsettling indeed: the scorched corpse of a bludgeoned young woman.  Most mysteriously, it appears that just before her death the dead woman spent a night in the yellow room at Crestview.  What was she doing there? And who killed her?

Over many pages--Rinehart's novels were lucratively serialized in women's magazines before appearing in novel form--Rinehart builds up quite a complex mystery which implicates many of the people not only in Carol's own family but in Bayside as well.

Rinehart manages something of a twist ending, but it is also one of those endings that involves a little too much explanation of just why this person did that.  Also, as I mentioned before, I think Rinehart's decision not to employ Carol Spencer as the narrator was a mistake. 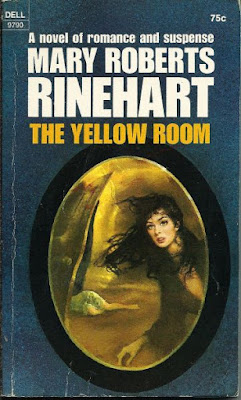 Arguably the main character of the novel is not Carol, but her love interest and the amateur sleuth of the story, Major Jerry Dane, convalescing from a wound received in Italy. In his prewar life an FBI man from a prominent Washington, D. C. family (his father was a senator), Jerry intrudes upon the local investigation with abandon and eventually solves the case, though only after another mysterious death and a couple of (non-fatal) shootings (This Rinehart actually has a disappointingly low body count.)

Rinehart's focus on Jerry does allow the author to depict detection more directly, but it gives Carol very little to do, since Rinehart will not allow her actually to join in the detection in a meaningful way.  (Clue-finding, like martial combat, is men's work, Rinehart seems to be saying).

The love element also feels rather perfunctory, since we are denied the chance of really seeing Jerry though Carol's perspective (though I have to give Rinehart credit for not overloading the novel with love as Mignon Eberhart so often does in her crime/romance tales.) 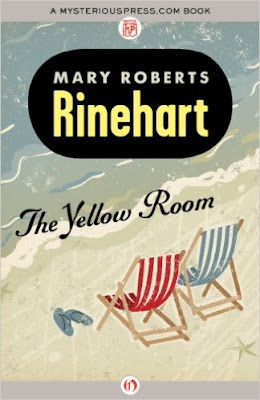 Still the mystery plot in The Yellow Room is interesting (if arguably too convoluted) and the novel, along with Rinehart's 1943 novella Episode of the Wandering Knife, gives readers the author's most interesting look at life in the United States during the Second World War.

There are some interesting thoughts about the war's impact on servicemen and the women waiting at home for them. (Carol, we learn, wants to do war work, but is stymied by caring for her mother, a situation similar to that in Knife.) Though on the whole I rather preferred The Wall, The Yellow Room was certainly worth a stay.

Posted by The Passing Tramp at 8:27 PM