Well Revived: The Dead Shall Be Raised (aka Murder Will Speak) (1942), by George Bellairs

Readers of this blog will know from my reviews of Death in the Night Watches (1945) and Death on the Last Train (1948) that I hadn't been bowled over with the mysteries of George Bellairs (Harold Blundell, 1902-1985); yet I now have found one I rather like: Bellairs' fourth published detective novel, The Dead Shall Be Raised (1942), which, happily, is being reprinted this year by the British Library, in a twofer with The Murder of a Quack (1943). (BL is also reprinting Death of a Busybody).  It's one of three novels the prolific author published in 1942.

Really creative detection does not seem to have been Bellairs' strong point as a crime writer and from what I've read of his books they soon came to emphasize a sort of acid whimsy in place of plot, something that is decently done if you go in for that sort of thing in a great way, but that palled in my case.  Yet Bellairs' earlier books, including the ones being reprinted by the British Library, seem better books all round.  The Dead Shall Be Raised is, indeed, quite good, in my view.

The Dead Shall Be Raised opens with Detective Inspector Littlejohn traveling on Christmas Eve, 1940 to visit his wife in the town of Hatterworth, "high on the Pennine backbone which separates Lancashire from Yorkshire," where she has gone to recuperate with an old school friend after incurring slight injuries in a German bomber attack. (For a Scotland Yard man, Littlejohn seems to have an inordinate number of cases in northern England--perhaps not coincidentally around Bellairs' own native ground.)

In Hatterworth, the Littlejohns are entertained by Superintendent Haworth and his wife on Christmas Eve and Christmas Day. (Presumably the surname Haworth is a nod to the Pennine town so famously and lucratively associated with the Bronte clan.)

The first chapters of the novel, in which Bellairs describes the activities of late night carolers and a performance of Handel's Messiah--Supt. Haworth sings bass in the Hatterworth Methodist Choir--are quite charmingly done; so much so, indeed, that I was not much minding the fact that murder so far was missing from the tale.

Yet soon enough a body is discovered on the moor, by members of the Home Guard digging trenches for maneuvers.  It's that of a man who had disappeared twenty-three years earlier, in 1917, after, it was then believed, having shot and slain another man, a former friend turned rival.  The newly-discovered dead man was shot as well, leading to the question, did some villain get away with a double murder in Hatterworth twenty-three years ago? 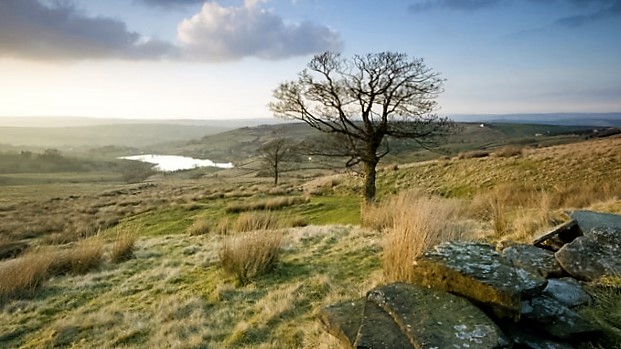 Here Bellairs has devised an interesting murder-in-the-past plot, enjoyably investigated--though with no astounding feats of detection, it must be admitted--by Littlejohn and Haworth, with crucial assistance from a well-portrayed elderly retired local superintendent who was in on the original case. There's another murder too, I should note, a poisoning this time, to keep the kettle stirring (and which helps the police crack the old case).

Throughout local color, as I've already indicated, is excellent and the characters engaging, all across the social spectrum. Though Harold Blundell graduated from London University with a degree in economics and became a Manchester banker he appears to have come from relatively modest circumstances, the son and grandson of Lancashire artisan joiners (and Methodists perhaps?).  I'm sure there will be more on this in the Martin Edwards' introductions to the British Library reissues.

All in all, an excellent vintage mystery, in which one can discern, I would argue, a connection to authors like Georges Simenon and Alan Hunter.  A good job!
Posted by The Passing Tramp at 1:00 PM