Tuesday Night Bloggers May Edition, Week 5: Reissue of Murder in a Walled Town (1934), by Katherine Woods

First, links to the other blogger contributions this week:

America from the Outside: The Traveller's Perspective in The Sharkskin Book (1941), by Harry Stephen Keller (The Invisible Event, JJ)

Cars and Murder in 1935 (Your Freedom and Ours, Helen Szamuely)

For myself, I'm pleased to announce I've written the introduction to Coachwhip's soon-to-be-published reissue of Katherine Woods' 1934 mystery Murder in a Walled Town, which is set in the fictional French walled town of Neyronnes (probably based on Domme, in the Dordogne region of France).  The novel takes place shortly after the new presidential administration of Franklin D. Roosevelt removed the United States from the gold standard, resulting in a steep drop in the value of the dollar relative to European currencies. 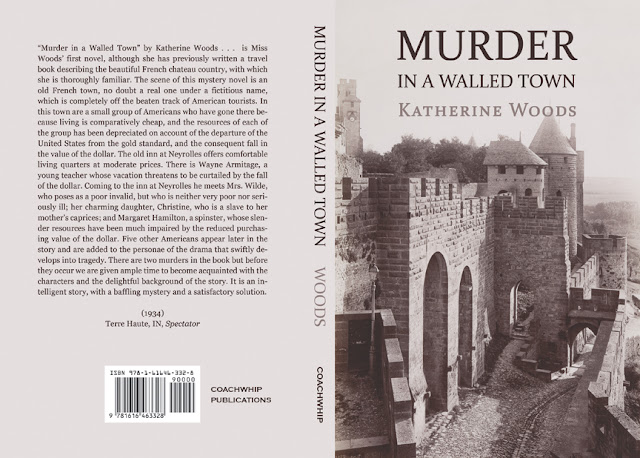 Murder in a Walled Town deservingly won plaudits in its day for its atmospheric setting and well-drawn characters.  In its depiction of businessman Horace Braye and social and economic conditions in the US and Europe in the Thirties the novel has some rather startling relevance to today, I think. (See whether Horace Braye reminds you of anyone you might have noticed on the American scene today.)

Born in New Jersey and raised in Pennsylvania, Katherine Woods (1886-1968) after her graduation form Mount Holyoke College went to work in journalism.  In 1912 she became a book reviewer for the New York Review of Books, a position she held for three decades.  A regular traveler in Europe in the 1920s and 1930s, she published The Other Chateau Country: The Feudal Land of the Dordogne in 1931, following three years later with Murder in a Walled Town. (Woods was a great admirer not only of France but of true crime and crime fiction.)  However she is best known today for having written the original English translation of Antoine de Saint-Exupery's The Little Prince, her translation remaining in print from 1943 until 2000.

Much more on Katherine Woods and Murder in a Walled Town is found in my introduction.  Check it out, I think you will like the book!
Posted by The Passing Tramp at 8:03 PM