One of Rudy Kagey's two closest undergraduate friends at the University of Illinois at Urbana-Champaign was Robert M. Yoder (1907-1959), a fraternity brother of Kagey's in Sigma Alpha Epsilon.

Having become in his post-college years a columnist with the Chicago Daily News, Yoder achieved a certain literary distinction after his service in the Second World War, in which he, then a husband and father of three, was commissioned a naval lieutenant. His wartime job consisted, according to his daughter, of writing speeches for admirals. (He was evaluated during the war as "an exceedingly competent public relations officer" and "an exceedingly facile writer, with great ability.")

In the post war years Yoder became a nationally known humorist and an associate editor at the Saturday Evening Post. His daughter recalled that he "would have liked to have been a Fred Allen or a Grocho Marx.  He used the same kind of biting humor and would have liked the greater degree of notoriety held by those two. [He] was....a Democrat, a Presbyterian....The Presbyterianism was taken on from his mother, but he did not display it much...."

When Yoder wed in 1932, the marriage was conducted by Charles Evans Bliss (1906-1986), a young Illinois county judge, who was another great undergraduate friend of Rudy Kagey during his college years.  (Like Kagey and Yoder, Bliss was a member of Sigma Alpha Epsilon.)

Oddly enough, Robert M. Yoder was a very distant--eighth, to be exact--cousin of my mother's, something I didn't even know before I began learning about Rudy Kagey. Yoder's elder brother, Dale, was a noted twentieth-century labor economist.

Rudy Kagey himself was clearly interested in journalism when he attended UIUC, serving as literary editor and columnist at the Daily Illini, a student-run newspaper founded in 1871.  For the newspaper he reported on campus events, reviewed plays and wrote editorials and satires. Possibly his most notorious piece for the DI was an editorial he published in January 1925, when he was 20, titled "The Balance."

In this piece Kagey lamented the postwar decline in emphasis in college education on the fine arts relative to the mechanical sciences and athletics, querying: "Has the placement on an equal footing of the department of Modern Languages, Athletic Coaching, Animal Husbandry, and History not rather destroyed a great Balance that has existed since the beginning of wisdom?" As Kagey would have been well aware, college enrollment nearly doubled in the United States during the 1920s, and with this phenomenon came greater emphases on "practical" business and technical education, as well as a heavy focus on organized intercollegiate athletics, especially football, the popularity of which dramatically expanded over the course of the Jazz Age.

With his editorial Kagey succeeded in stirring up, as the DI put it, "hornets from the ravaged nest of the good people," who accused him of anti-democratic elitism.  In his letter to the paper, someone who signed himself "Sir Laughalot" surmised that "the academic Mr. Kagey...does not care much for football, animal husbandry, engineering or any of those pursuits which do not involve the assimilation of the higher learning."


Sir Laughalot allowed that "everybody knows that football and engineering...have pushed the Muses off their sacred wall and have built stadia and skyscrapers on Mount Olympus," but faulted "the Muses for putting up such a poor resistance."  Sir Laughalot pointed out that "Pindar wrote odes to Greek athletes that far outlived the fame of those athletes" and suggested that if "Herr Kagey really has the divine thirst let him stop raving about commercialism and morons, and take his pen in hand and compose an 'Ode to Red Grange' which will be read twenty centuries hence."

Kagey's college contemporary Red Grange (1903-1991), for those who don't know, played halfback for the University of Illinois from 1923 to 1925, winning for himself the nickname "the Galloping Ghost." He inspired the esteemed sportswriter and broadcaster Grantland Rice to pen these poetic lines about him, as Sir Laughalot had suggested to "Herr Kagey":

A streak of fire, a breath of flame,
Eluding all who reach and clutch;
A gray ghost thrown into the game,
That rival hands may never touch;
A rubber bounding, blasting soul,
Whose destination is the goal--Red Grange of Illinois!

In a 1983 interview Red Grange himself recalled of his college education at UIUC:

I didn't have a scholarship.  Never such a thing. Heavens no.  Everybody paid their own way.  I never got a dime to go to school.

I majored in business.  Took a business course and economics, history, analytical geometry.  I had all kinds of trigonometry.

And I had good marks in school.  Just because I played football, doesn't mean I was dumb.  A Lot of people think, because you play football, you're dumb.

A new football stadium had been completed at UIUC in 1923, the year of the lauded Red Grange's arrival, at the cost of 1.7 million, or about 24 million today (actually not so much by today's stadium standards, though it unquestionably represented the greatly increased financial commitments that colleges were making to football programs in the Twenties).  On October 14, 1924, some 67,000 people attended Illinois' home game against Michigan, which vaulted Red Grange, who over the game's duration scored six touchdowns (including a 95-yard touchdown on the opening kickoff), to national prominence. Rudy Kagey evidently was less impressed than Grantland Rice with Red Grange's dramatic accomplishment, however.

"R. E. H.," another contentious letter writer on the question of academic "balance," quite explicitly threw down the class card, castigating "poor, deluded Kagey" in unambiguously egalitarian terms: "Will you please tell him for me that today, even as three thousand years ago, the older order changeth, giving place to the new?"


R. E. H. urged that the old order, which he suggested Kagey try imagining as a seesaw, was no great shakes:

Now in the olden days, so fondly eulogized by Mr. Kagey, on one end of this seesaw were the University people.  There were only a few of them.  Mr. Kagey admits that fact.  At the other end was the great mass that constituted the rest of the people.  That, says Mr. Kagey, was the ideal Balance. ...The great mass of the people were down on the ground, in the muck, and the favored few--and favored by birth, please note--were up in the clouds, blissfully chattering of their wonderful Balance.

Now see what has happened.  One by one, the great mass has climbed up the seesaw toward the fulcrum.  Bit by bit, as they got closer and closer, and as some of them even crawled past the fulcrum and out amongst the favored few, the lighter end of the seesaw dropped and the lower end raised. The more near a level the seesaw became, the easier it became for the great mass to climb up the board. And as their end of the board began to sink, the favored few were forced to creep closer to the fulcrum themselves, to keep from dropping down.  They even began to mingle with the great mass. From such a mingling has come those dire calamities, Animal Husbandry, Athletic Coaching, and their ilk.

Of course there are still remnants of the favored few hanging on to the end of the seesaw. You can find them here in the back rooms of the seminars, and while they are forced down to the level of the others, or nearly so, they are still a separate, and probably an advanced, group.  But they aren't arguing how many angels can dance on the point of a pin, or whether Joan should be burnt because she talked of God and not the Church, they are discussing the economic interpretation of history, and psycho-analysis as a means of getting better results from employees.  Maybe, if Mr. Kagey walks very carefully and keeps his balance, he can edge his way out there.  Probably enough of the great mass are still left on the opposite end of the seesaw to keep the balance.


In contrast with "Sir Laughalot," the criticism of "R.E.H." is rather stinging toward Kagey, casting the young philosophy major as a snobbish elitist desirous of maintaining the college as a rarefied bastion of class privilege.  This attack prompted one "Cinicus" to come to Kagey's defense. "R.E.H.'s" letter may well have constituted a "swell little essay on social equality" "Cinicus" rather condescendingly conceded, but it missed the point entirely, since the "Balance" in Kagey's essay concerned not that "between aristocrats and peasants, or even college men and non-college men," but, rather, that "on which is weighed the value of the mechanic arts and the fine arts."

"Bernard" next entered the fray, chastising both Kagey and Cinicus for their lofty pretensions to intellectual superiority:

Strange as it may seem to Mr. Kagey and to Cinicus, there are other pursuits in this corner of the Cosmos besides Literature and The Arts....There is just as much learning involved in these other pursuits as there is in the former....Men fully as brilliant as our two Schoolmen, Kagey and Cinicus, may at this minute be carrying on research in Apiary Management, while the fratres ponder upon the submerging of the Balance. 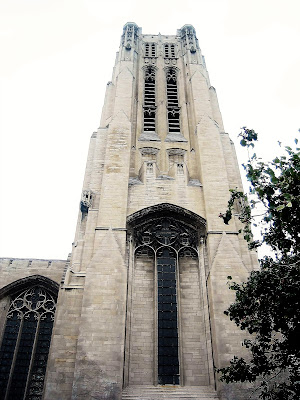 I couldn't help thinking, as I read over this epistolary dispute, how a decade later Rudy Kagey would as "Kurt Steel" launch a successful writing career in crime fiction, one in which over time he would address highly topical social issues like racism and the struggle between capital and labor, typically from more of a liberal/left perspective.

From the lofty heights of proud tower of pure intellect he chose to climb down annually in the Thirties and Forties and address the public in a popular literary medium. Perhaps his spat with Sir Laughalot, Bernard and, most of all, R. E. H. spurred him in this direction.

However, there is evidence that Kagey's own family background tended to orient him this way as well.  In the next post I want to look at the public activities of Rudy Kagey's mother, Martha, who exercised great influence over him, and the future crime writer's own early expressions concerning the perennially thorny subject of race.
Posted by The Passing Tramp at 2:41 AM