Suddenly in the Summerhouse: The Gazebo (1956), by Patricia Wentworth

"There is one of those old-fashioned summerhouse places which they used to call gazebos at the top of the garden."

No one is going to believe you are under forty yourself if you have a daughter who might be thirty-five.

By 1956, when Patricia Wentworth published her 29th Miss Silver mystery, The Gazebo, in the US (it was published two years later in the UK), the series tropes had long been established. To me the novel feels a bit tired, yet there remain plenty of elements that are sure to please the Wentworth fan. 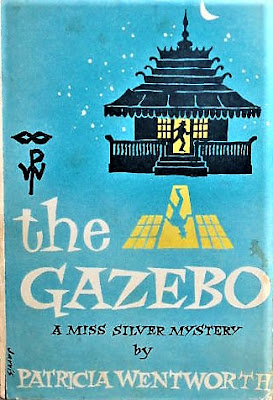 The Gazebo tells the story of lovely but much put-upon Althea Graham, cruelly exploited by her needy and possessive "invalid" mother.

Five years earlier, Mrs. Graham by having one of her "heart attacks" sabotaged her daughter's intended marriage to dashing Nicholas Carey, with the result that Carey, a journalist, left England for various exotic foreign parts, leaving Althea behind with her ever more heartlessly demanding, vain and egocentric Ma.

(See the quotation at the top of this review, which amusingly depicts 48-year-old Mrs. Graham's typically selfish reasoning in wanting her harried 27-year-old daughter to spruce herself up a bit.)

Now Nicky Carey has come back (complete with a convenient inheritance), in order to inventory items left in the attic of a cousin who sold her house and moved to Devon. (Apparently this is a task which takes weeks.) Emotional fireworks ensue, along with, eventually, you guessed it, murder!

(Wentworth's fictional world is filled with cousins of varying degrees, incidentally, as was her real world.  Although born in India, where her father was a high-ranking British army officer, Wentworth was educated in London, where she resided at the Blackheath household of her widowed maternal grandmother, along with her mother, two younger brothers, five unmarried aunts and ten cousins from three different families.  It's no wonder cousins pop up so frequently in her novels: extended family connections were crucially important in Wentworth's own far-flung life.)

It is Mrs. Graham, of course, who gets bumped off--strangled, to be specific--in the gazebo on the grounds of the Graham house in Grove Hill, a community located on the outskirts of London; and it is Nicholas Carey, naturally, whom the police, as embodied by Wentworth's endlessly "elegant" series copper, Frank Abbott, suspect of the crime.  Two recurrent features of Wentworth novels, as any fan will know, are winning young lovers and the unmerited pursuit of these young lovers by police conducting a murder investigation. 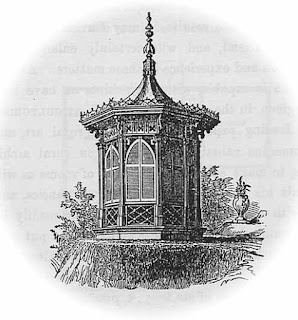 In an Agatha Christie novel it might very well be the case that Althea or Nicky (or perhaps both of them) would turn out to be guilty parties, but in a Wentworth novel True Love is Innocent, Triumphant and Everlasting. The author makes clear that her lovers are guiltless of foul play; and much of the appeal of The Gazebo, as in other Wentworth tales, lies less in ratiocination per se than in the induced pleasurable anxiety of seeing the young lovers trying desperately to elude the tightening net of suspicion. (I'm rather reminded of the crime fiction of Mignon Eberhart.)

Of course the lovers in Wentworth's tales happily have in their pocket a dauntless guardian angel, or white witch, to rescue them in the form of Miss Silver, the genteel yet steely ex-governess turned spinster sleuth.

The suspense didn't come off quite as well for me this time, however, because there just wasn't any really plausible motive for either Nicky or Allie to "end" the admittedly tiresome Mrs. Graham, as Allie's dead father had left his noble daughter, not his nitwit wife, with the family purse strings. There was nothing, really, to stop Nicky and Allie from getting married and leaving Mrs. Graham with the house and a very patient companion. It takes Frank Abbott a lamentably long time to appreciate this truth, though of course Miss Silver sees it immediately. (Abbott suggests, in effect, that Nicky might have reverted to a sort of savagery after spending five years in those aforementioned exotic foreign parts).

Unlike Abbott, readers of the novel probably won't have a hard time spotting the real culprit, nor with spotting the motive for this person having gone lurking late at night in the gazebo. (They will be wondering, as they should, why the eighteenth-century Gordon Riots keep getting mentioned.)


Still, there are  a lot of classic features in the novel that should appeal to fans of the Miss Silver series.  There are, for example, classic Wentworth characters like the Misses Pimm, three snoopy, unmarried sisters who absolutely live for nosing out other people's private affairs, not to mention Ella Harrison and Fred Worple, a pair of Wentworth's lamentably modern "outsiders."

One of the Misses Pimm immediately recognizes Fred is a stranger, "because nobody in Grove Hill wore the kind of clothes he was wearing."  "They're quite new and quite dreadful," primly pronounces Allie of Fred's flashy habiliments.  At least a couple of Grove Hill people liken him, on account of his loud clothes and forward manner, to a spiv.

Sounding rather like his censorious beloved, Nicky for his part thinks at one point how much he dislikes the dubious Ella, with her "brassy hair and all that make-up."

To both Ella and Fred, notes an evidently disapproving author, "noise, glitter and plenty to drink were the essentials of enjoyment."  Not for nice Wentworth people nightclubs, jazz, cocktails and conspicuous consumption--that stuff's for the bad 'uns!

Then there are all the "middle class" people in Grove Hill who seem still to manage to avoid having jobs by living off their investment income, even as they endlessly complain about heightened taxation and the continual challenge of finding good "daily" help.

This sort of thing is the sort of thing about which over the years I have written many words, both in books and on the blog, arguing that it should not be taken, as it so often has been, as representing virtually the whole of Golden Age British mystery.  Indeed, The Gazebo was published fifteen or more more years after what is traditionally seen as the end of the Golden Age of classic detective fiction. It is, in fact, more "Golden" in style than much actual Golden Age mystery. 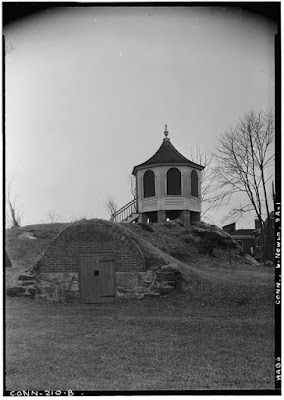 Unquestionably The Gazebo conforms to many of the stereotypes of Golden Age detective fiction. Although individual titles in the series will vary in quality, overall Patricia Wentworth's Miss Silver mysteries are remarkable for the perfection of their "classic" milieu. For me it's this quality that makes fascinating even minor "Wentworks" (if you will), such as The Gazebo.

As mentioned above, The Gazebo was published in the US in 1956 and in the UK in 1958. In 1957 another British crime writer with his wife published a mystery short story titled "The Gazebo," which in 1958 he expanded into a successful play of the same title.

This play in turn was adapted as a popular film in the US later that same year. A posting on the film The Gazebo (1959), which has nothing to do with Patricia Wentworth (or does it?), is coming up here later today.
Posted by The Passing Tramp at 2:52 AM