Two years after mystery writer Patricia Wentworth's crime novel The Gazebo (reviewed by me here) was published in the US in 1956, Alexander "Alec" Coppel's play The Gazebo, starring Walter Slezak and Jayne Meadows, opened on Broadway on December 12, 1958.  It ran for 266 performances, closing on June 27, 1959.  On the American tour which followed its closing on Broadway, the leads were Tom Ewell, of The Seven Year Itch fame, and Jan Sterling.

With Ian Carmichael (television's original Lord Peter Wimsey, I believe) and Moira Lister in the leads, the play premiered in London's West End on March 29, 1960, and ran for 479 performances. No Mousetrap, to be sure, but no "mouse" either! 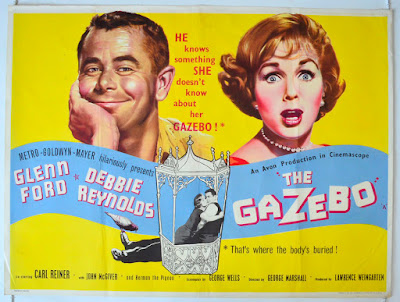 Wentworth's The Gazebo and Coppel's The Gazebo seem to have almost nothing in common, beyond murder and, yes, the presence of a summerhouse, aka a gazebo--though I suppose it's possible the idea of centering a crime tale on a gazebo may have come to Coppel from Wentworth's novel. In any event, Coppel, a successful Hollywood scripter, playwright and novelist, enjoyed much success in his own right.

Coppel scored a stage hit with his third play, a light mystery play called I Killed the Count (1937). After 185 performances in the West End, the play was filmed in England two years later and it opened on Broadway in 1942, though in the US it proved something of a bomb--that's a bad thing in the US-managing only 29 performances before closing. (More on Count coming soon at the blog.)

During World War II Coppel moved back to Australia, where he enjoyed more stage success, but after the war he returned to England, where he wrote additional plays as well as novels and screenplays. (He had already novelized Count in 1939.)  Both the crime novels A Man About a Dog (1947) (in the US, Over the Line) and Mr. Denning Drives North (1950) were filmed in England, the former as Obsession (The Hidden Room in the US) and directed by Edward Dmytryk.  The latter film starred John Mills as the titular Mr. Denning.

Coppel's screenplays include No Highway (1951) (aka No Highway in the Sky), adapted from a Nevil Shute novel, and The Captain's Paradise (1953), starring Alec Guinness and Yvonne De Carlo (for which Coppel received his sole Oscar nomination).

Coppel also worked on the script for Alfred Hitchcock's To Catch a Thief (1955), and wrote the original draft of Hitchcock's Vertigo (1958). Around this time his fiction provided the basis for no less than six episodes of Alfred Hitchcock Presents, including a three-part adaptation of I Killed the Count. 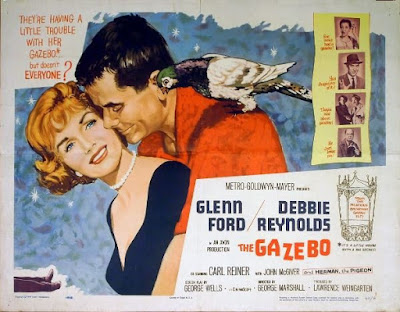 Thus The Gazebo, Coppel's return to the light mystery thriller form, was filmed at the height of the writer's success.  For the film--which was directed by George Stevens, director of the 1940 Bob Hope supernatural comedy thriller The Ghost Breaker; Murder, He Says (1945), another mystery comedy, starring Fred MacMurray; and the Raymond Chandler scripted crime drama The Blue Dahlia (1946)--two of the most popular mid-century American film actors, Glenn Ford and the late Debbie Reynolds, were cast as the leads: nervous and agitated television crime show writer and director Elliott Nash and his irrepressibly cheerful singer and dancer wife, Nell. (Yes, this role was surely quite a stretch for Debbie Reynolds!)

Most of the film takes place at the Nash's suburban Connecticut home, where Nell is busily planning the installation of an English Victorian-era gazebo on the grounds while Elliott is busily plotting the murder of a nasty blackmailer who has in his possession incriminating photos of Nell ("art" nude photos done when she was eighteen).

I found The Gazebo an amusing and entertaining murder farce. Some contemporary reviewers pronounced that Glenn Ford was miscast in a comedy part, but I think he is quite good in the film's key role. Debbie Reynolds is reliably spunky (she really was unsinkable on film in the Fifties); and a cheerful song and dance number with the consummate entertainer appears early in the film (because, I presume, she's Debbie Reynolds, don't you know). Reynolds sings snatches of her ditty a couple of more times, but, most happily from my perspective, the film soon settles down into pure comedy--and murder.

Enjoyable as the leads are, however, I imagine Tom Ewell, Jayne Meadows and the underrated Jan Sterling would have been great as well. I can't recall Walter Slezak in a film at the moment, though I saw Alfred Hitchcock's Lifeboat some time ago and Slezak was supposed to be very good in it, though definitely not humorous.


Carl Reiner plays Harlow Edison, the Nash's nosy district attorney neighbor (uh-oh!), but for me the stand-out comedic supporting performers are the always wonderful John McGiver, the homespun building contractor who pronounces gazebo as "gaze-bo," and the always wonderful Doro Merande, as the Nash's very loud! housekeeper. Also notable is a young Martin Landau, whose part in the film, however, is not comedic. Indeed, the same year he played a similar role, very memorably, in Hitchcock's North by Northwest.

Comedic bits early in the film remind me of the New York suburbanite comedies George Washington Slept Here (1942) and Mr. Blandings Builds His Dream House (1948). For the rest, you'll probably be more reminded of Hitchcock's ambulatory corpse comedy The Trouble with Harry (1955)--or even, given the pivotal part played by Herman the Pigeon, The Birds (1963)! But The Gazebo is not for the birds.  Rather, it is a clever comedy for connoisseurs of the fine farce of murder--by all means, check it out.
Posted by The Passing Tramp at 10:12 PM