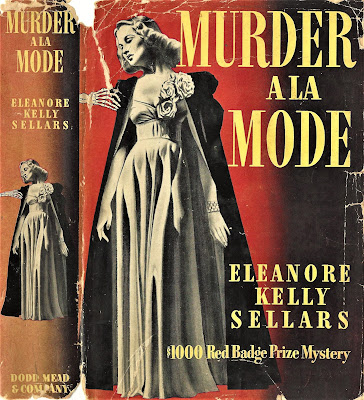 Winner of the $1000 Dodd, Mead Red Badge prize for the best mystery by an author not previously published under the Red Badge imprint, Eleanore Kelly Sellars' Murder a la Mode (1941) is an excellent detective novel of the "manners" school that is associated with such Golden Age Crime Queens Dorothy L. Sayers, Ngaio Marsh and Margery Allingham. The novel details a series of slayings involving the officers and personnel of Dexter & Cole, a fashionable Fifth Avenue department store, and is narrated by executive assistant Deborah "Debby" Wood.

The first of these fiendish killings takes place at a business conference at a great neoclassical house above the Hudson River, making Murder a la Mode something of a classic form country house mystery, yet the novel is also very much a workplace milieu mystery in the manner of Dorothy L. Sayers' Murder Must Advertise (1933), Margery Allingham's The Fashion in Shrouds (1938) and Christianna Brand's Death in High Heels (1941).  Though there is a lot of interesting detail in the novel about an early Forties business environment that included women in important positions, the mystery plot itself is excellent and quite twisty.

Eleanore Kelly Sellars (1903-1972) was well-suited to write such a book, having herself been a Manhattan retail executive and copywriter. As Eleanore Kelly the author grew up in comfortable circumstances in Monessen, a steel making town located in southwestern Pennsylvania's Monongahela River Valley (see pictures below), the daughter of bank president James Howard Kelly, one of the most prominent men in the town. (Like many other towns in this region, Monessen since has lost its manufacturing base, with a resultant large population decline; then presidential candidate Donald Trump appeared in the town in 2016, promising to restore the region to its former industrial glory.) 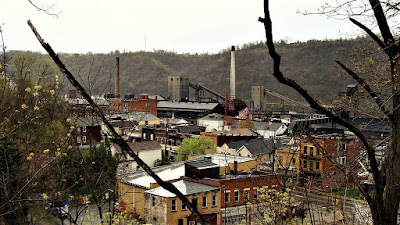 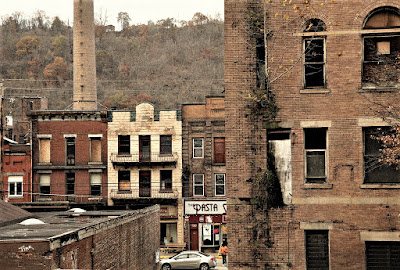 Eleanore Kelly graduated from Wellesley College in 1925 and moved to Manhattan, where four years after that she wed Raymond Sellars, a General Motors auto loan officer. In the 1940s the couple moved to San Francisco, where Eleanore continued to write, publishing short stories in Collier's Weekly and Liberty.

Though once very physically active, Eleanore suffered spinal trouble in the late 1940s and as far as I know only produced one additional work of fiction, a play (non-criminous) starring faded Thirties Hollywood film star Kay Francis.  Yet though her writing career likewise faded, Eleanore Kelly Sellars' one mystery novel deserved again to see the light of day.  Happily the novel has now been reprinted by Coachwhip and is available on Amazon.  For this reissue I wrote an introduction of 3000 words.  Give Murder a la Mode a try, I think you'll like it.
Posted by The Passing Tramp at 2:20 AM