Edgar in the Closet

On Friday Murder in the Closet: Essays on Queer Clues in Crime Fiction, which I first blogged about here a year ago, was nominated for an Edgar Award by the Mystery Writers Association for Best Critical/Biographical work.  I both edited and contributed to this collection, which scrutinizes LGBTQ themes in and writers of crime fiction in the period before the Stonewall Riots, a pivotal moment in LGTBQ history.  (They are coming up on their 50th anniversary next year.)

This is a subject area which some years ago I concluded, from my reading in the mystery genre from around 1920 to 1970, has been seriously understudied in works of mystery genre history.  Personally I was continually surprised by how many LGBTQ crime writers, seemingly unacknowledged as such, kept popping up from this period during my own studies (which had nothing to do, incidentally, with LGTBQ history), and by how LGBTQ themes kept appearing, if necessarily in more oblique fashion than today. "Murder, Obliquely," as Cornell Woolrich put it. 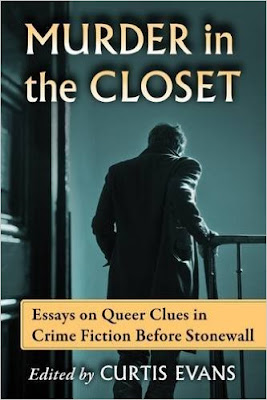 How had these themes not been acknowledged in the once quite popular and still critically well-regarded work of Patrick Quentin, for example (or the fact that the two men behind Patrick Quentin were for many years a couple)?  Weren't we ready today, I asked myself, for an unblinkered appraisal of this body of work?

In 2015 I sought out people from both the blogging and academic worlds to contribute to an essay collection, and was pleased with the enthusiastic responses.  The result was Murder in the Closet, which takes readers on quite a queer and colorful tour of crime fiction from Fergus Hume in the 1880s to the early George Baxt of the 1960s.

I'm so glad that the MWA has recognized the worth of this study.  The other nominees are a prestigious group indeed, including biographies of Daphne du Maurier and Chester B. Himes by Tatiana de Rosnay and Lawrence P. Jackson and fascinating critical studies of the perennially popular Arthur Conan Doyle and Sherlock Holmes by Mattias Bostrom and Michael Sims. It really is an honor just to be nominated with this group, and I hope the nomination of Murder in the Closet may encourage some more people to rummage through the closets in the great house of vintage crime and mystery fiction.
Posted by The Passing Tramp at 1:40 AM